But now the champagne corks may be popping up! The fact that the latest and sixth album release of this fully trend-resistant, long-term rebels contains some completed sovereign songs, is the one thing.

The fact that the British Thrash Metal veterans around vocalist Sy Keeler have their current songs but at the same time so sensationally original, makes the simple „VI“ titled release an eminent publication, which hits as powerful as an ear deafening fall-hammer impact from felt 100 meters high.

The current successor to the explosive pack „Sounds Of Violence“, which came on the market in 2011, is thus at the same time the most comprehensive, richest, hardest and above all the most original litter of the English formation. I talk to guitarist Nige Rockett. 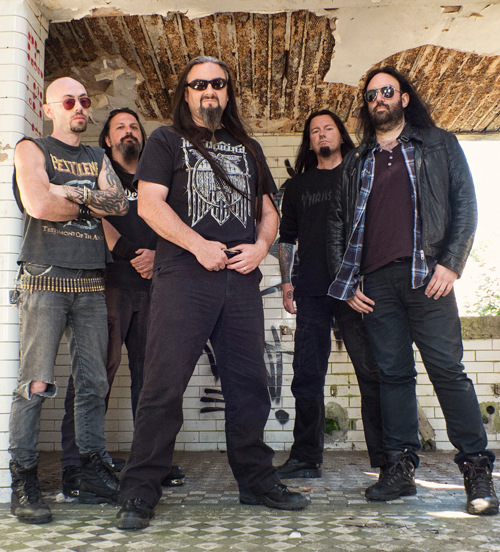 Formed in 1982 - and now, more than 3 whole (!) decades later, such a huge killer record, after all those years. Ever expected such a unusual band history?

„Thank you! No, I could have never imagined when Onslaught formed, that 30 years on we would be making probably our most brutal album of our career so far! The thing is, Onslaught took a 14 year break after splitting in 1991, so when we came back in 2005 there was such a build up of fire, anger and frustration, it was very easy to motivate ourselves to write some really inspired, aggressive and meaningful music. ‘Killing Peace’ was a strong return for Onslaught but we were still finding our way back, the ‘Sounds Of Violence’ album was a big step up in 2011 and became the bridge for the creation of the new ‘VI’ album … I honestly feel this new record is the best album we have ever delivered and the initial responses have been totally amazing, hopefully this will be our time!“

Please tell about the most important reasons for you to still playing Thrash Metal! Hate and disgust for the rotten societies on these globe?

„For me the answer is very simple, I love fast, violent music and it gives me the freedom to express my true feelings! Thrash Metal is the purest genre of Metal there is, no bullshit, no frills, it’s very pure and down to earth with lots of energy. We like to write about a varied range of subjects that our fans can relate to and understand on a personal level, its all about reality in the modern hate filled world of 2013.“

Let's face the modern days mass-medial mental pollution and manipulation - which world we'll have in 10 years?

„I really don’t like to think of the situation we could be faced with in 10 years time, chaos is drawing ever near! You just have to look to the middle east to see where the world is heading, global conflict is only a short step away. Every day we are being closely and secretly watched and monitored by our governments, Big Brother is here, manipulating the people, the media and smaller nations around us, there is definitely a hidden agenda and we are just the pawns.“

How do you spend your free time beside job and band? Surely not with sitting in front of the big, new TV, watching ‚true‘ daily news!? 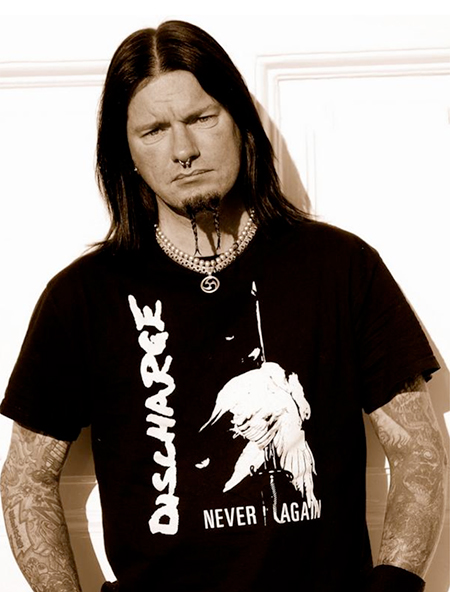 „I very rarely have any free time right now. Over the past 6 months I have been working constantly on the ‘VI’ album for sometimes up to 20 hours a day, so watching the daily news is not really an option for me, haha… When I do actually get some free time, I like to unwind by watching football and letting off some aggression that way or simply just going to local bars with friends and getting hammered, its all about extremes.“

Back to music - which is your ever favorite Thrash album?

„Am I allowed to say Onslaught - ‘VI’? Hahaha! If not, I would probably have to say ‘Ride The Lightning – Metallica’, its so raw and the guitar tone is amazing. It was such an innovative album for the time, ‘Fight Fire With Fire’ and ‘For Whom The Bell Tolls’ are just perfectly sublime Thrash Metal tracks!“

How and where do you see Onslaught nowadays unto all the other - often times mediocre and non-original - Thrash Youngsters all over the globe?

„We have been here for 30 years and I really think the best is still to come from Onslaught, our global fanbase is expanding all the time and I am real positive that ‘VI’ will take us up to the next level! The response so far has been incredible. There’s a lot of new bands out there playing Thrash music in 2013 but to succeed they really need to try and take things in a more original direction, because the likes of Testament, Kreator, Onslaught and Exodus are still here and really kicking peoples asses with cool albums and great live shows.“

The new material sounds extremely ‚catchy‘, in spite of all the typical used elements and outstanding high technical abilities of Onslaught. What is your own deeper opinion about the new finished release?

„I am personally so excited about the new album release. We pushed ourselves to the limits technically and physically when making this record, It was a lot of fun but real hard work. Thank you I’m pleased you say that. Thrash Metal has always been about big catchy guitar riffs and lots of vocal hooks too, it’s been that way from the beginning and I feel its so important for us to incorporate these vital elements while attempting to make a great record. I really must give a special mention to Thomas ‘Plec’ Johansson who mixed the ‘VI’ album, he really captured the true live energy of Onslaught and gave every instrument the space to breathe, he truly made our visions come to life.“

How long did last the songwriting in total for the new release?

„Myself and Andy started writing steadily for ‘VI’ soon after the release of the ‘Sounds Of Violence’ album in 2011, but it wasn’t until autumn 2012 that we really started to concentrate the sessions. We left ourselves a lot to do in such a short space of time come the end and it made things tougher than it really should have been, but we do like to work under pressure, it always creates good results.“ 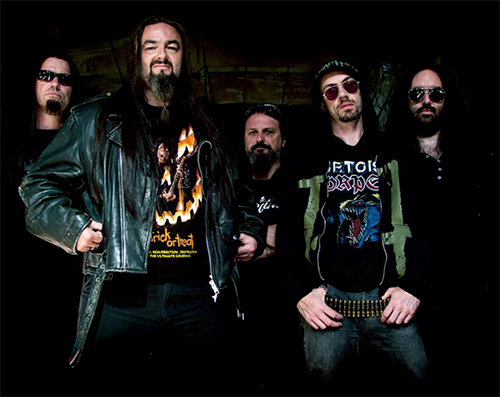 From where came all of these new unexpected and sweeping ideas for your new music?

„The new ideas had been developing steadily since the ‘Killing Peace’ album. We always like to make each album more aggressive, more technical and more thought provoking than our previous release, so once again we used that as our template. We looked at all the good qualities of our earlier songs and built new and original ideas from there, we also looked at things which maybe never quite worked last time to make sure we didn’t make the same mistakes once again. It was a very clinical and precise process writing ‘VI’. We analyzed every single note and every drum pattern to make sure we always chose the best option for the feel of the song, its amazing how changing one single note or beat can change the whole attitude and vibe of a track.“

Which special visions running through your mind while playing these new truly surprising dynamic song material? Again, I like the news songs very much!

„It’s violent sounding music with tons of energy, so all I am seeing is the fans in front of us going totally crazy. We wrote every song on this album with live performance in mind and to get as much crowd participation going down as possible. We wrote rhythms to headbang to, rhythms to pit to and vocals to scream along to. I really can’t wait to play ‘Chaos Is King’ and ‘66Fucking6’ live, it’s gonna be immense.“

One can puzzle about - is it permissible to ask for special musical influences in the latest song collection of Onslaught?

„Listening to Metal is one thing I never really do when we are writing a new record, I don’t wanna take in any subliminal influences that may affect the sound our new music whatsoever. I will maybe listen to other styles of heavy music instead and I tend I to go back to my collection of Punk music and take inspiration from there. Its always great to hear the classic Sex Pistols and The Clash albums over and over again.“ 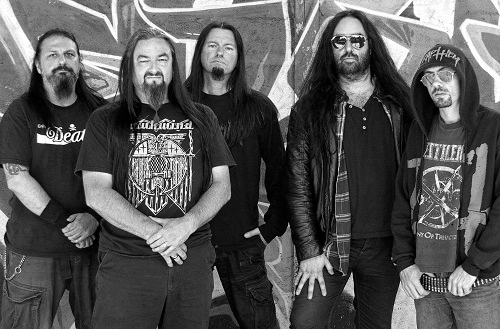 Please tell a bit about the main lyrical content of the new disk!

„Musically, the entire ‘VI’ album was written by myself and Andy Rosser Davies, straight down the middle, a 50 / 50 split, and lyrically, everything was written by myself. ‘VI’ contains some real interesting subject matter. ‘Chaos Is King’ and ‘Enemy Of My Enemy’ are thoughts about the conception of a New World Order and ‘Children Of The Sand’ and ‘Slaughterize’ reflect the current conflicts in the middle east. These 2 songs are based around personal letters we have received from people actually working out there and telling us about their thoughts, its real heavy shit and quite shocking in parts! We worked so hard on ‘Children Of The Sand’ using real strings section and female vocals to give it a real eastern authenticity and paint a truly dark background for the words. There’s a cool and funny story behind the lyrical inspiration for the track ‘66Fucking6’, based around this review we received on Amazon USA for the ‘Sounds Of Violence’ album: ’’This album will create a demonic influence in your life. There is nothing good in this, look at the lyrics to every song, destruction, evil, hate, hell. They are telling you a new world order is coming, it is music straight from Satan himself’’. We used the ‘Tritonus’ notes on the music box intro, which is said to represent the ‘The Devil in music’ and I then took the basis of the review as template for the lyrics. It’s a kinda tongue in cheek approach and has some great hooks for the fans to sing along to. I’m real happy the way the lyrics turned out on ‘VI’ - it’s typically Onslaught in the themes but as with everything else on this album I feel we have raised the bar from previous releases.“

What do you think will be the worldwide reactions to these surprising good album?

„It’s gonna be huge! Hahaha! I really do believe that the ‘VI’ album is gonna be very well received worldwide, I have everything crossed in hope, haha. The record has all the vital ingredients to do well for us! It has some awesome cover artwork by ‘Par Olofsson’, the final mix sounds incredible and the songs really stand up for themselves, so its now over to the fans and the press to let us know what they think. It’s a nervous time.“