On their second album „Storm Is Coming“ the Dutch perform a really superbly balancing act between heavy metallic pressing hardness and aesthetic harmony.

Quick as lightning, the cheese rollers position itself with with their new songs abruptly in the top ranks of the profession.

Founded in 1999, the tasteful members refined their exceptional individual style to today's nobility.

This was the beginning for an enjoyable striking conglomerate of Blackened Thrash Metal, played more liquid and clearer as a glacial spring.

Onheil can animate highly charged energetics, which stirs up the blood as much as a truckload of energy drinks. In such a special condition I talk to vocalist und guitarist Amok about „Storm Is Coming“. 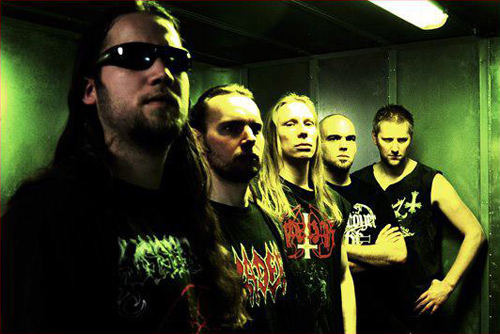 „Haha, fuck yes. But we did release a mini-CD and a few demos, too! For our releases we always chose quality above quantity! It's better to take a long time and create a great album then work really fast and have bad one. I can write a new album every month but that would be totally crap! So we just don't record an album until the songs are perfect. And that takes time. But we are already writing music for the next album. Maybe the next album will be done quicker, or maybe not, haha!“

What counts most for you in making music with the band?

„For me music is about feelings and emotions. This can be aggression, hatred, sadness but also power, pride and sometimes even happiness. There is no other medium that can have this same effect on me. In the process of creating an album I like it when I write the songs and create a pre-production demo. To create something new and experiencing the true feeling of the song for the first time, that's one of the best things in the world. Then later on I like it when we play the songs live. It's truly great to get in a really energetic state together with the crowd. Let's hope we do a lot of shows in Germany again!“

„That's a really tough one. It should be Metal but we set no further musical boundaries for ourselves. Because of this our sound is quite diverse. You know, we call our music Blackened Heavy/Thrash Metal. So the basis of our sound is fast Black Metal but we have a lot of Heavy and Thrash metal riffs in there. Also we have a lot of classic Heavy Metal melodies and our songwriting is very Speed and Heavy Metal influenced. There are even also some Death Metal things, some clean vocals and acoustic stuff in there, too. I guess if you mix all of that you get the Onheil sound! Furious, fierce yet melodic Metal!“ 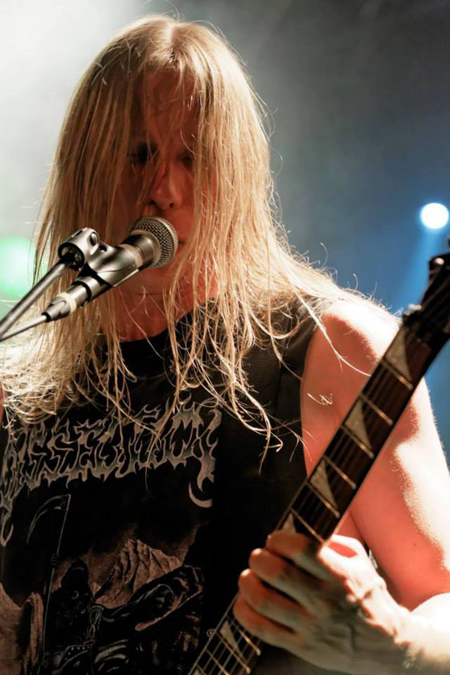 The well made, catchy contrasting melodies are a main part of the extremely dynamic material - who of you guys takes care about it so successful?

„I have a really wide range of Metal I like and for this album I wrote all of the songs. It can be extreme and brutal music but also classic Heavy Metal stuff. An aggressive blast beat can be as good as a well written harmonic guitar melody. I like combine all of these influences into something new. On our previous album 'Razor' our guitarist Haat also wrote some stuff. He also likes both extreme Metal and melodic guitar parts too. We have 3 guitarists so we use them to create extra good melodies!“

Please report about the main content in general of the lyrics! (Still about Apocalypse, misantropy and self-destruction?)

„Onheil means something like 'disaster', bad things that happen to people. Off course similar to the German word Unheil. Those are also the subjects we sing about. It can be things like the apocalypse, self-destructive behavior, war, violence, and with this album the destructive force of nature. That sounds all pretty negative but I guess we have a negative view on the world. And music is great to get all of that out of your system. If you want happy stuff, you can listen to pop music!“

„That's hard but I think I would choose 'Self-Destruction Mode' as it's the most personal song. As the title suggests, It's about my self-destruction tendencies which get's me into problems regularly, but it's also something any true heavy alcohol drinking Metal head can relate to. There are occasions where you drink all day and at 5 o'clock at night you get in all kinds of problems. You do stupid shit, get wounded, get into fights, you cheat on your girlfriend, get arrested... and the list goes on. The next morning you have a hangover that last for days. And for some reason you do the same thing again next week, haha.“

Which (intensive) feelings did rule your minds during the songwriting?

„That is really different per song. During some songs it was aggression, hatred, frustration but the songs about nature invoked more feelings of amazement and a sense of power. 'Storm Is Coming' was actually inspired by the Tsunami in Japan back in 2011. I was watching the video footage of whole cities and villages that were swept away by the water and I realized that, despite what wisdom and technology humanity has, nature can still the most powerful, unstoppable, force on earth. Amazing!“

Do you have a personal favorite unto the new songs which you want to bring a bit closer to the readers?

„Pfff, I like them all, haha! I again have to say 'Self-Destruction Mode'. It's definitely a good one. Very straight forward, energetic, thrash-like, song. We already play this song in our shows and it's always madness! There is also a music video for that: https://www.youtube.com/watch?v=2Y5wb_NV3TQ . “Storm Is Coming' is also great, a very fast and powerful song. 'The Omega Legions' is totally different, more an epic song, great for headbanging. 'Kill Tomorrow' is very good because of it dynamic nature. It's furious and brutal but also has a few slow and atmospheric parts.“ 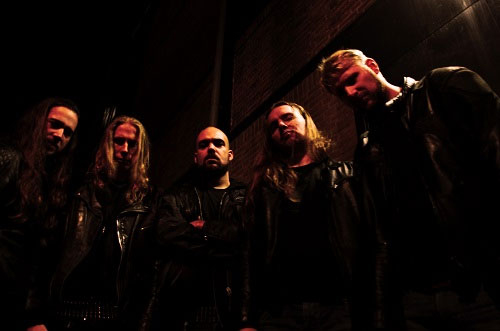 „Good question, I’m not really sure. I guess it was about 2 years. The basis structure and main riffs of the songs are usually there quite quickly but it takes a really long time to fine tune everything. And sometimes a songs doesn't work and we throw it away. I wrote the whole album but in the past our guitarist and second singer Haat also created a few songs. Maybe he will do so again on the next album.“

Is it allowed to ask you about nowadays special musical and personal (maybe even spiritual?) influences?

„Musically we get inspired by so many kinds of metal and maybe even some hard rock music. But we always try to avoid copying music from other bands and to create something original. So I can't really give you anything specific. I do have admiration for Carcass as they handled their musical career in the past. They did something different every album, never repeating themselves. That's how more bands should do it! We aren't spiritual people, I guess we get inspired by daily life. There is too much fucked up shit going on!“

To which music do you listen to at home mostly these days?

„As long as it's glorious Metal, and I like it, I listen to it. It ends up being mostly Black, Death Thrash and Heavy Metal from the 70's, 80's and 90's. Not a lot of new stuff, musically speaking we all mostly live in the past. An couple of examples are Dissection, Emperor, Immortal, Gorgoroth, Darkthrone, Impaled Nazarene, old In Flames, Hypocrisy, Carcass, Vital Remains. Kreator, old Helloween, old Megadeth, Judas Priest and Iron Maiden , to name but a few. I was actually just listening to 'Once Upon The Cross' by Deicide. Classic album! Before that some Falkenbach. It can be just about anything! Cheers and thanks for your support!“