At least with me already for a longer time as deeply honored secret tip on the way, these Finns let their second album „Years In Waste“ now finally from the pile .

The subtly progressive painting of the always very intense and wonderfully atmospheric Melodic Death Metal of the resourceful sextet has indeed changed a bit in terms of bandwidth of influences. 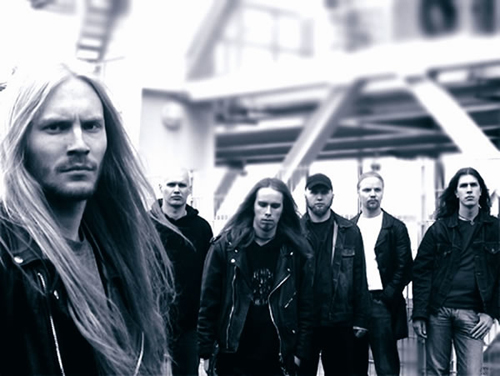 Where you come from and what is there going on?

Markus Vanhala: „The home base of Omnium Gatherum is located to Karhula, the heavy suburban of Kotka city in Finland. Nothing so special to tell about everyday life in here; it´s composed of Metal music, band rehearsing, beer and spirits, unpleasant studying and working etc… Though it`s not boring either.“

Antti Filppu: „I'm from Helsinki. Daily life is odd, and at this moment a bit boring too. Haven't got a job, haven't got any money. Studying, reading, writing, walking around in the streets.“

Jarmo Pikka: „Daily life isn't always that fantastic. We all have to go school or work besides playing in Omnium Gatherum. Yeah, you know, I gotta buy some new drumsticks too.“

What led to the decision to play this kind of emotional and dramatic Nordic Thrash Metal?

Markus Vanhala: „It`s more about melodic Thrash and Death Metal with some progressive spices and gloomy atmosphere. And infact the mood isn`t throughout so dark in the end, there`s also some sentiments of hope in the melodies too between the dark lines. And the style has spontaneously developed to this direction, we haven`t planned the choosing of a certain genre much. So, I guess the inner mental state is some subconscious Omnium Gatherum factor what produces this stuff. To be honest, at first in the 1996 the band was formed because of these albums: Dark Tranquillity “The Gallery”, At The Gates “Slaughter Of The Soul”, whole Death catalogue and In Flames “Subterranean”. But we failed in our quest and Omnium Gatherum´s music turned to be something original and individual music, hehe.“

Jarmo Pikka: „I dont think there was some sort of decision done earlier when we decided to form a band. The things just came naturally together and the outcome can be heard through our music. Yeah, maybe there is some Dark Metal, but you can also find 80's Rock and Progressive Rock.”

Markus Vanhala: „Prodigal Son, social, stubborn, creative, control freak on band things, metal, one minute I could be the coolest pleasant easy-going nice dude and other minute the biggest asshole on the planet-usual stuff for the Finnish character, hehe! Guitarist – that also tells a lot from the personality of a person … who the fuck wants to play and work out guitar.”

Antti Filppu: „I'm literally the band's Ass. And my boots are getting old and torn again.“

Jarmo Pikka: „Responsible, humble, hardworking (in some areas), honest, pleasant to other people ... but sometimes also very rash in some cases…”

What other Metal bands you like and who are your favorites?

Antti Filppu: „What counts as Metal? Well, let's see: I still got Ulver's "Bergtatt", Emperor's "In The Nightside Eclipse" and "Anthems To The Welkin´ At Dusk", Cradle Of Filth's "The Principle Of Evil Made Flesh", all Katatonia stuff, one of Babylon Whores releases, and the first two The Black League CDs!” 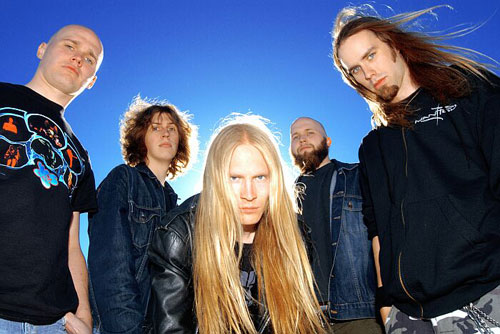 Do you love it, to be a human on this earth?

Markus Vanhala: „Yeah, I think it`s cooler to be a human and life your own life here without pushing your nose to other peoples business, rather than to be some insect or something. If everybody would just live the own life and do the own thing then everything might go smoother ... or maybe not.“

There is a musical change to hear – please describe the development of the current sound!

Jarmo Pikka: „I think the current sound in "Years In Waste" is much more relaxed, natural and more mature. Yeah, the songs are even groovier than before and there is more ideas shown here. I also think that every song has its own personality so you can't be bored if you listen the album even ten times in a row.”

Markus Vanhala: „The style have developed to be a lot more individual than on the previous one. It`s heavier and same time got some more sophisticated melodic and progressive sides than before… It`s more mature stuff in general. Summa summarum is better!“

Antti Filppu: „It's more straightforward on the other hand, but more difficult on the other. It doesn't have those easily opening bigger than life hit music riffs. But the sound quality is softer.“

Which are the more or lesser changes in your opinion?

Markus Vanhala: „There are lots of more kick-ass heavier parts and feel throughout this record but some people have also said that this is more melodic album that the previous… Don´t know, everybody should listen this album and “Spirits and August Light” one after another and make own conclusions. That`s for sure that this is better and more versatile record.“

Jarmo Pikka: „My opinion is that we are on the right path now...“

Are you fully satisfied with the end result of the third album release?

Markus Vanhala: „Hell yeah, very satisfied indeed, the whole band is. “Years In Waste” is absolutely our best piece of work so far and we have now found the right way on doing our stuff in this release. Of course there`s always some blaahblaah about doing some parts betterly but, that`s a clichee also to say this in this question but… I think this is the best result we could have done in this situation and presently and it represents Omnium Gatherum‘s years in waste 2003 - 04 perfectly. But of course the next one will be better again, or otherwise the thing sucks!“

Jarmo Pikka: „Right now I am quite satisfied but you never know what I will answer to you after lets say: six months.”

Which emotions should feel the listeners while listen to your music?

Antti Filppu: „I hope they won't hear disgusting hypocrisy. I hope they can identify at least to some degree: to the misanthropy and to the grief, and I hope they'll see where these paths came from and where they will lead. So that a sense of meaning could be born.“

Markus Vanhala: „I want also that people can get good beer drinking feelings from the album, “party album” or something, hehe… The album should work on the bar, on the car, on the background music for making love, when you are feeling angry, depressed or happy, wake you up on the morning and get good vibes thru that then etc… Hopefully it works I trust that it will at least on some people, everybody gotta test it! And on the gigs it should cause activity, moshing and enthusiasm on the crowd.”

Jarmo Pikka: „Hopefully they can get some energy and adrenaline from our music ... it is always great to see people smiling and banging their heads.” 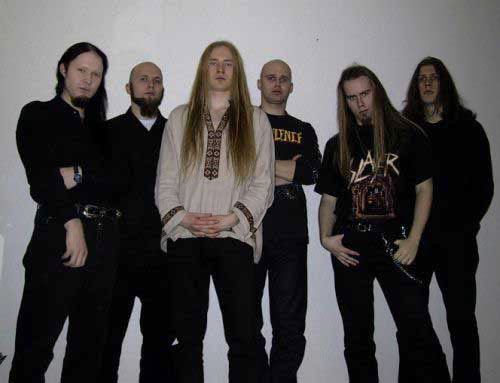 What is behind the album title „Years In Waste“?

Antti Filppu: „Depends on how literally you want to take it. Years spent living in all kinds of waste ... ha ha. It's the old 'wasted years' distorted. A journey to the waste lands of.“

Exists a lyrical concept on the new album?

Antti Filppu: „... one's youth that went down a sewer. Depression is one of the themes, when it's true you don't want to be in it anymore. Dealing with the spiritual and psychological breakdown that tries to get us. Yeah, trying to get a grip.“

Please tell some influences – musical and lyrical – for your compositions!

Jarmo Pikka: „Musical influences are coming from everywhere. Everybody listens different kinds of music and that helps to create something new I think. For example, Janne likes the old school garage Rock, Harri would listen to new Entombed album while I could throw some Pop music from Prince to my CD player. For myself, as a player, I take lots of influences from other drummers, like Vinnie Colaiuta, Dave Weckl, Pete Sandoval, John Blackwell … yeah, and the great great Virgil Donati!”

What‘s behind the titles of the songs?

Antti Filppu: „"The Fall" - opens the door to the other songs. It's both autumnal cliches and the fall. To see the space between the burden of life and no burden at all. "Bereavement" is concentrating on what's essential. Letting go of something. "Misanthropic" is an old song title from August 1996 and it draws a line between the Norse Ragnarök and the Finnish shamanistic view on things. The latter is better. It doesn't have to rely on 'the end of the world'. "Black Seas" returns to a lonely time near the bosom of the great mother. Sensing its presence. Sympathy for the young and the wicked. And apologies for one's mother! "Long Night" will come to those who don't have anybody to lean on. The depression theme, you see. "No Moon" continues on this trail, 'for life can be hard sometimes' is one of the cutest lines on this album, he he he. "Gravesilence" is also a title of old, from January 1997. Even then I thought the title sucks! On purpose, on purpose. "Withering" returns to poetry and sadness, trying not to forget how bad the time used to be. "Auguries" is odd as hell. But it's not that bad, is it.“