Obscurant emerged in the second half year of 2000, first of all yet as a soulful one-man project. Established of initiator Luukkainen during its military-service, it was already soon clear to the soldier that his compositions screamed through after a correct band quite yet more loudly than his grim drill-instructor.

Things did its course. Recorded during the months of March and April 2002, the publication of the debut album of Obscurant seems now as a good fortune moment for the profession taken in the duty. With „Lifeform: Dead“ this surprisingly high class combo has created one perfectly sublime midtempo Death Metal creature, whose sound seems to burst sheer out of all valuable seams by melancholic aggression pushes.

Sometimes majestically depressive sounding, this album is fulfilled noticeably of one just as uncanny as fascinating evil aura. Singer and lead guitar servant Luukkainen has to face my questioning curiosity. 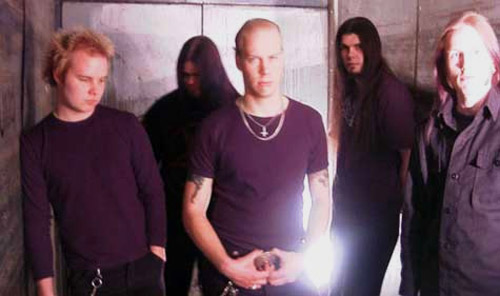 From which city do you guys hail?

„From a city called Jyväskylä which is pretty much at the centre of Finland.”

Does exist a conception behind the new album, and if yes, which?

„The main concept of the album is a mixture of suicide, depression and agony. In my opinion, these subjects are rather inspiring and dominating parts in life and are therefore easy to write about.”

What has the title „Lifeform: Dead” to mean?

„It’s quite obvious that after a suicide a person becomes deceased and, thus, his/her lifeform gets the definition “dead”. The title is in a formal shape as if taken from a report or some other similar document and is therefore both neutral and cynical.”

Who has written all these brilliant and epic tracks for „Lifeform: Dead”?

„I don’t know about the brilliance… But anyway, I’m responsible for both all the music and lyrics in Obscurant. I write the songs at home and then teach them to the rest of the band at rehearsal place, it’s as simple as that basically.”

Which are the inspirations for the music of Obscurant? Hate, despise and cold misanthropic moods?

„I draw inspiration mainly from depression and agony but sometimes I don’t need any inspiration at all in order to compose a song for Obscurant. Sometimes they just evolve out of the blue.”

The unique and epic Dark Death Metal style of Obscurant is fully touching me; how was it developed?

„It has been a result of natural process. I mean, when I play the guitar and come up with a riff, I instantly know whether it is a riff for Obscurant or not. So, the development of this style has been a matter of choosing the riffs by their atmosphere and not that much of a matter of creating consciously a certain style. If it touches your soul, then I guess I must have done at least something right.” 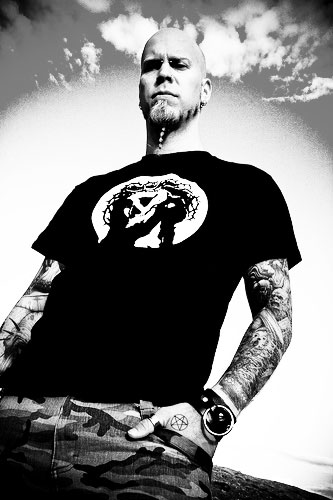 Do you think the sound of Obscurant is typically Finnish, especially with regard to musical seriousness and highest melodic approach?

„I don’t know if there is a certain typical Finnish sound or not. But if there is, I guess we fit in that category just fine because we sound quite melodic and melancholic.

What does the band name Obscurant mean, maybe more than the sense of the word?

„Basically Obscurant means “opposed to indoctrination” or “against progression”. This concept fits our band just perfectly because it is musically built upon somewhat simple and basic elements. And when it comes to the ideology of this band in particular, we aren’t that much supportive towards the education of people on the basis of a sheep-mentality.”

Be so kind and explain the lyrics of a few songs out of „Lifeform: Dead” with own words!

„Let’s take a couple of songs for an example: „Face In The Mirror”: A person faces his reflection which turns into an image of abomination of death. Finally he can’t take it anymore and dives into the mirror cutting himself to his final sleep. Everyone can figure out the symbolicism by themselves. „Symbiosis”: A raped woman thinks back to the time when the raping took place and falls into despair. She then stabs herself in the stomach, thus, killing herself and the bastard fetus inside her. „The First Day”: This is a basic story about awaiting the coming of the end. Apocalypse which comes in the shape of an enormous nuclear explosion. These kind of images fit Obscurant’s music the best. Depressive feelings and suicidal thoughts combined with the final solution.”

Which are the deeper philosophies, if they are existing, behind Obscurant?

„There aren’t any specific ideologies surrounding Obscurant because this band reflects only a certain part of us as individuals and that part is our general despise for human life and weakness. We channel a depressive atmosphere through Obscurant for the listeners to identify with and to process within them.”

Which were your early idols out of the Metal scene and which ones did influence you?

„I honestly can’t point out any actual idols out of the metal scene but the earliest influences are most likely Metallica, Iron Maiden, Slayer, Pantera, Sepultura etc. The biggest source of influence for Obscurant has clearly been Hypocrisy.”

To which acts do you listen to nowadays, only Death Metal stuff?

„Actually I listen mainly to Black Metal, of course also to Death Metal, but not so much as you think. The main bands are Thorns, Behemoth, Carpathian Forest, Satyricon and so on. So the main focus goes on to Black Metal.”

Which imaginative pictures do you see while listen to your own music and having closed your eyes?

„Mainly the same scenery of which I deal with in my lyrics.”

„Very cynical, anti-religious and a novice alcoholic. It´s quite hard for me to describe myself as a person, somebody else should do it…”

What is your definite goal with the music of Obscurant?

„Become the biggest fucking Rock star on the face of the planet! No, seriously speaking, to release as many albums as possible without losing the individuality and feeling. It would also be great to be a supportive act for some bigger band. And certainly having some groupies/bitches wouldn´t be too bad of a thing to happen, he he.”

Have you been felt already during your childhood that you longing to do something special and dark when you´re older?

„I can’t say that I remember having had such longings in my early childhood. All this has developed along with the growth of my own personal identity and self-awareness.”

Last special words to the fans?

„Check out our album and keep yourself trigger-happy!”