These valiant Russians were able to enjoy large international success in the Viking Metal fanbase with its second album „Hammerfrost“.

So it was only a matter of time until the debut album „Last Son Of The Fjord“, which was ever extremely heavily to get in Europe, newly was put on and appears now in a jewelry re-release.

Axeman and singer Sigurd raves still about the contribution of its troop at the German Ultima Ratio Festival 2005. Hey Sigurd, which main activities happened after the release of your second album in 2005?

„After the release of our second album happened a lot of events. First, I'd like to point out our performance at Ultima Ratio festival in Germany. It impressed us greatly. It was the first time we have had a gig outside Russia. We liked the public, because we felt the support of our fans. There were many bands, who took part at this festival and we had an opportunity of meeting many of them. We like the musicians who together with us took part at this event. We got a lot of positive impressions from our trip. I also would like to mention that there is a grate difference between Russian festivals and Ultima Ratio. We were very pleased to see friendly people who respect the creative work of other bands I can't tell that about people from Russian band. Also, after the release of "Hammerfrost" we had some changes in the line-up. We had to fire our ex-singer. On the new album you will hear fierce screaming of our bass player. The other important thing is that our new album almost ready. And we are going to record it soon.“ 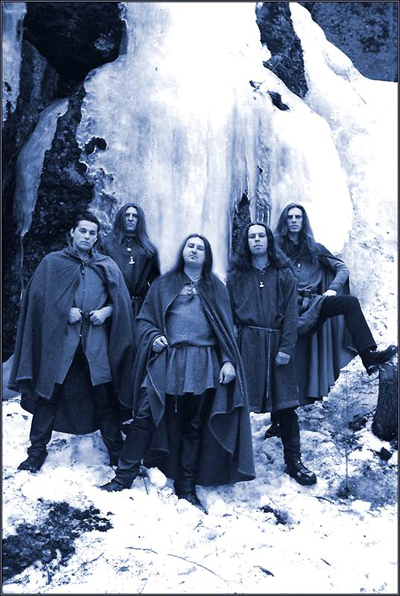 How do you feel when you think about the new publishing of the Nomans Land debut album?

„This is great that our first album is re-released, because now it can be heard not only in Russia but also in the world over. Besides the sound quality must be better than in Russian release. I have seen some reviews, and all of them are very positive. It is always pleasing, when other people like what you are doing. It proves once again that our music evoke a keen response in the souls of many people.“

How much copies of „The Last Son Of The Fjord“ were originally pressed? It´s pretty sought these times and luckily I own the original first pressing.

„There were 1.000 copies pressed in Russia. This is a standard edition for the debut album of a young infamous band. This album was sold out and has not been released since. This is true that many people would like to have this album in their collection. Even the musicians of Nomans Land would like to have it. We have only one copy for all and are looking forward for the re-release. So, dude, you are lucky to have it. By the way, where did you get it?“

I got it from an little German mailorder. Did you expect such a great success for that album originally?

„In 1999 when we were recording this album, no one expected it to be the album which so many people would like to hear. But as time tells Nomans Land did a good job.“

Which specific circumstances and influences led to such a high-quality and unique musical style?

„The main point is that Nomans Land is people who have similar inner world and understanding of music. Of course, during the rehearsals, we have argues, but without them we couldn't achieve the best sound of the song. We are always trying to make the new song equally good for each of us. This is very important for us. Scandinavian mythology, no doubt, influenced us greatly. We have been interested in it long time and it is still interesting for us. All of that contributed much to the creation of specific music which includes Scandinavian folk melodies. Besides, themes of the songs has a lot to do with the Viking Age. We play the music we like without paying attention to curtain music styles or new popular trends. Our music is always popular for us!“

Please give a detailed description of the finished product of the re-release! Which bonus tracks will be included?

„This CD (general duration 35 minutes) includes seven songs, one instrumental, and one bonus video. There will be several tracks from the live show of the band. Also we'd like to mention that the sound is remastered and is much better than on original CD.“

From where have been taken the live-show-clip bonus tracks?

How much are you satisfied with the result of the new release?

„Time will tell. In any case, we are very glad that our debut album is reborn. That is cool!“

Which expectations do you have in mind for Ragnarök Festival 2006 in Lichtenfels, Germany?

„First of all we expect real Metal! A lot of praise worthy bands are taken part at this festival and I would like to see their live show. And we would like to meet them. And of course we are going to show metal made by Nomans Land! We expect a lot of positive impression from this concert and we are looking forward for it!“

Does exist a difference of the Russian visitors of your concerts to the German fans?

„Yes, there is a great difference between Russian and German fans. The matter is that way of thinking of Russian and German differs too. Metal music is not popular in Russia. And speaking about Russian in general, I can conclude that many Russian people are suspicious of this kind of music and do not understand it. This is one of the reasons why the quality of festival organizations is low. We hope that the situation will change some day. Speaking about Germans and Russians I can point out the difference of behavior and attitude towards musicians. But we appreciate the support of all our fans no matter what country they are from. Everyone who comes to our concert is important to us.“

Which are still the most inspiring topics for you?

„It is not this style of music, the band is playing, and themes that are important. The way people, who make music, feel music - that is important. For example, if a guy it trying to create a new song, and he is paying more attention to the style of music than to his feelings and emotions, as a result he will create a song that will resemble music he has heard before. As for Nomans Land, we are inspired by our inner world. The world where there is a place for great warriors of the Viking Age, frost, and grandeur of severe Scandinavian nature. This is our world, we live in it, and we are trying to make people feel the things we feel in our music. In a few words we are inspired by our inner world. And this world resembles the world of Vikings very much.“

What are the necessary elements which make a Nomans Land song a good one?

„When we are creating a new song, we cannot afford it to be mediocre or worse than other our songs. The most important thing for us is that we want our songs to inspire us for heroic deeds and give us even more energy and motive for creating new songs.Is very important for us to create songs that can set a fire in our souls and send shivers down the spine. It's very important not to miss the moment when the song has been played many times, and it sticks in our mind. It seems that there is no other ways of looking at it. But very often, as times goes by, we are looking for new ways of creating sound and song structure of even higher quality. So, the important elements of creating a song are the process of writing a song and understanding that this is exactly what we want to hear as a result.“

Which are the best songs on the re-release to your mind?

Regarding Viking Metal, what do you think about the works of other acts in that style?

„This Style of music has changed greatly recently. It was Folk music with heavy guitar, it was pure Death Metal except lyrics, it was Doom Metal with texts about Viking Age. There is a lot of bands who address in their creative work to the Middle age and there is fairytales characters and real characters in their songs. Every musician is a creator of his own outlook and conception of his songs and the way he presents his music to the listeners. Every band is worth being respected if the musicians are sincere in their creative work. And every work of Viking metal band is worth respect and attention.“

How much are you satisfied with the activities of Einheit Produktionen to date?

„Yes, we are quite satisfied with work of Einheit Produktionen. They are professionals. We get a lot of attention.“

„It's hard to say, because everyone of us has a job and we are trying to find as much time as possible to devote it to our band. We are interested in all kind of arts, cinema, music or something else. We are very interested in making video and in playing part of heroes we are singing about. It will happen someday, I'm sure. We would like to try ourselves in other kinds of art but this is a question of time. But stay quiet! Nomans Land is the most important for all of us. Viking Metal is the most important!“

„Now it is hard for me to tell you about experimentations, which may take place in future. We are developing and our understanding of music is constantly changing, but we are striving for the best. That's why we can say that experimentations are possible but what they will be like no one knows!“

„We are going to play Metal! Our plans for the future are to record the album, release it and make our music heard all over the world. To record the next album and never stop at what we have achieved!“

Thank you very much for this interview, Sigurd! Could you please close off with your own words?

„For everyone we want to tell the one thing: listen to your heart and never give up your dreams! And be yourself! Listen to Viking Metal!“