The sunny spring of the year 1996 brought in Russia, more exactly said in Saint Petersburg, the establishment of these musically enormously valuable Viking Metal staff to light.

Latest was certainly a wise decision of artistically profitable consequence, as should turn out rapidly: scarcely at the turn of the millennium they recorded their debut album „The Last Son Of The Fjord “. 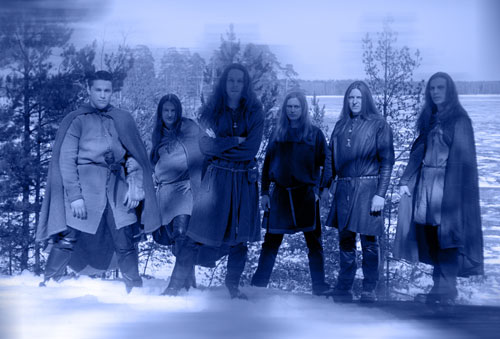 This marked an absolute top start at the beginning. In the following some first local festivals were lively attacked. Now these pleasing melodic acting warriors presenting the new album „Hammerfrost “. Guitar player and vocalist Sigurd knows a lot to tell.

Hey Sigurd, please give a biography and a discography of Nomans Land!

„Nomans Land was founded in Saint Petersburg, Russia in spring 1996. Originally music has been focused on Doom Metal, but eventually and of changes in staff the musical concept became Viking/Nordic Metal. The material for a full-length album was ready to the end of 1999 and it has been recorded in the summer 2000 at Signal Studios. In the same year the disc was published by Fono Records in Russia under name „The Last Son Of The Fjord.” The band concerted actively in clubs of Saint Petersburg and took part in local festivals. 2001 passed in the atmosphere of preparation of the material for the second album. As a result, the band came to record the album „Hammerfrost” at Calypso Studios in the summer 2002. The disc has been completed by the end of 2002. 2003 has been devoted to the development of the band musical concept and the composition of a new material. In April 2004 we got the deal with German Einheit Produktionen.”

What has the band name to mean?

„Nomans Land is how we imagine the land of the Vikings, those beautiful landscapes of Scandinavia and, of course, the mythology. Many lands were discovered by the Vikings, and we're still discovering this mysterious Nomans Land.”

How are you guys doing these days?

„As if now, we're still working on the new material for our third album. This process is a very creative one and is interesting for us. Our collective work unites the group and helps us on stage. Let's hope that future is good for the band.”

Saint Petersburg – how is the life there?

„Saint Petersburg is north-west of Russia, near Finland. It's sometimes called the northern capital of Russia. We love our city, and the fact that it was built on the bog adds some kind of mysticism to it; those who've read Dostoyevsky will understand that. When it comes to the music life, there is a lot of Rock- and Metal bands here, a lot of concerts happening, and the audience is always eager to kick back.” 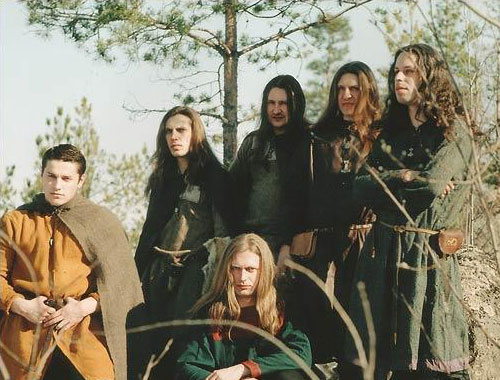 Which things are you prefer to do in your free time - outdoor, praising the impressing nature of Russia?

„We don't have much free time, and when we do, we spend it differently. We try to hang out together, but it's hard sometimes. Nature: we can only say that our northern nature helps us create music.”

Which bands mark your strongest influences?

„I like Slayer and Amorphis. Our second guitarist Torvald loves Amorphis, In Flames and Mithotyn. Our bass player Hjervard prefers to listen to Iron Maiden and Slayer, Drummer Ainar also likes Slayer very much. They are very different as persons, but they like good music. They love Metal music, probably because they're attracted by the romanticism of ancient times. You know, sword fights, rituals, folklore: maybe they're all barbarians deep inside!”

What has the album title name to mean?

„The title „Hammerfrost” mirrors the feel of the album. You'll hear about Thor and his hammer Mjolnir, about the frost and the cold winds of Yotuns.”

Which band member did compose all these heroic and overwhelming melodies?

„The melodies are generally my work, but we all take part in creating our music. The work is complete when every one of us is satisfied with the result. It's very important for us to work collectively and walk the path of creation, no matter how long or thorny it is. Some songs are born out of jamming, others get worked on for months.”

I like the male choirs within your songs very much – how they have been developed?

„They appear just like the music, with the winds from Scandinavia. We just know how to catch the wind, hahaha!”

Which are the main lyrical influences at Nomans Land?

„Our music is very influenced by the mythology and polytheism of ancients. There was a time when people and nature were one, and gods helped people survive. Gods live while they're remembered, so we're keeping them alive. The time of Ragnarök hasn't come yet.”

Please tell a bit about the lyrics of the songs on „Hammerfrost”!

„We wanted to pay homage to the life of both the Vikings and the gods in the same album. That's the concept of the album – to tell the listeners about those times.”

Which other Metal and Folk acts do you like to hear? Which ones are your favourites?

„We like a lot of Metal bands, but our favourite folk bands are Mullaret, Hedningarna and Hagalaz Runedance.”

Do you like it much to play your music on stages?

„To tell you the truth, we always anticipate our next concert, even if they happen frequently. Live shows are like a second life for us and for many other musicians. We feel very comfortable on stage and we're happy to share our enthusiasm with the audience. And, believe us, they never leave disappointed. You have to be sincere on stage, so we give it all out.”

How looks a live show of Nomans Land mainly?

„We don't have a special show, everything is natural. We have the drive that brings more and more people to our concerts. We were searching for our own, unique sound, and since we found it, we can proudly say that you could tell Nomans Land from any other band with your eyes closed. Hope you can all hear it for yourselves.”

What´s your own personal opinion about the new full-length?

„We're happy with it. At this point, it's the best we could put out. We consider it a big step forward, toward the discovery of the mysterious Nomans Land. We're very glad that now we can share it not only with the Russian audience. But we'll judge the success of this album by the people's reaction.”

Which are your expectations regarding the upcoming release of „Hammerfrost”?

„We're very excited about it's release, which is going to happen in February 2005. The forecast is good, the fans are waiting for „Hammerfrost”, and those who weren't introduced to the Viking Metal can do it now. Hope they'll like it.”

„Continue playing and creating music, improve it. For the nearest future – we want to put out another album and shoot a music video or two.”