These French grandmasters of Power Metal have a long and history beginning in 1979. Their break came in March 1983 after opening for NWOBHM heroes Def Leppard at the Grenoble show in front of over 4.000 fans, what has opened the doors of record companies to them.

Nightmare then signed to English Ebony Records in 1984, for the recording of their powerful debut album, „Waiting For The Twilight”. After the release the quintet has hired a new singer, Jean-Marie Boix (ex-Bronx), who brought new momentum to the band with his characteristic and in first line immense powerful voice.

With this new addition, the both talented guitarists Jean Strippoli and Nicolas De Dominicis, bass-player Yves Campion and drummer Jo Amore recorded their second magnificent Metal opus, „Power Of The Universe.” Many years later, Nightmare re-emerges from the ashes of a „should-have-been success story”. 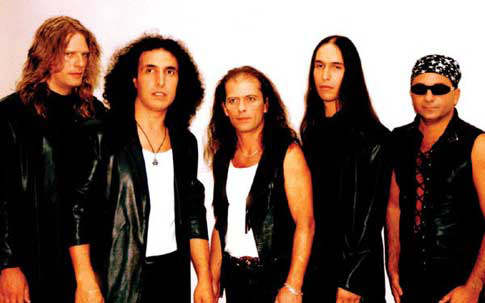 Austrian Napalm Records has signed Nightmare in late 2000 as the first Power Metal signing in their Death and Black Metal history, what speaks clearly for the high quality of this glorious group.

In June of 2001 they're ready to enter the famous Soundsuite Studio with no lesser than famous Norwegian producer Terje Refsnes on the helm for the recording of their brand new album masterpiece, „Cosmovision“.

The rebirth of this French legend is complete – reason enough to attack Yves Campion with a few questions.

What´s the current situation in the band – still a constant line-up or any new members?

How were the critics for „Cosmovision“ to date?

„I think we had so far good response from the press in general in France of course, but also in countries like Norway with a 6/6 on Scream magazine. (thanx to them!) The response from the audience is the most difficult to get into and we hope that everything will work out fine!”

What does the band‘s name Nightmare mean for you guys – the exact meaning of the word or is there a deeper sense behind?

„It's strange because it could be a bad dream that become a real dream. In fact, we've found this name at our inception back in 1981 because we thought it was commercially fitting for a Metal band... We were also writing lyrics about scary movies and stuff like that and it fit perfectly.”

What‘s the meaning of the title „Cosmovision“ for you guys and what is the main-concept or theme on it?

„It's about a lines of Nazca in Peru... It's the vision of the Andean people about these riddles unsolved... According to them, there is a relation (link) between these lines designed on the ground by ???? and the astrology and this link has something to see with the future of our planet... This is called by the Andean people, the cosmovision or mystical vision of the earth... The main theme is about this but we used a lot the topics of the unsolved riddles of our planet earth like the temples of necropolis in Egypt,... etc...” 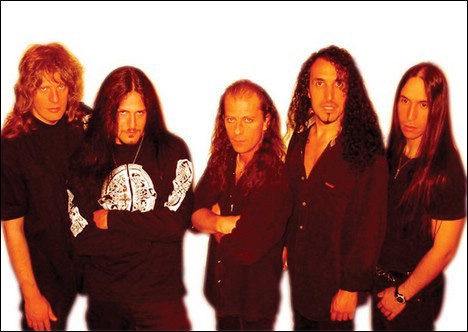 How long was the work for the whole production?

„We stayed 6 weeks in the studio.”

How long took the process of composition for the new material?

„We took around 3/4 months for the pre-production of the album and we finally used 10 songs but at the beginning we had around 20 songs.”

Who has composed most of the tracks for the new album?

„We have composed a lot starting from the vocal lines and adding after the riffs... we thought is was the most efficient method... All band members gave their own idea at the end when the main parts were finished and all these various influences made this something special... If you add to that the ideas of the producer specially regarding keyboards and choirs, you'll get the final result.”

Who has written all the lyrics? Exists a main-writer?

„I have written the lyrics with our singer Jo. You cannot when you are in a better mood to write lyrics... it's something natural, sometimes you can sit down for 2 hours and write nothing and sometimes you write a whole text in 15 minutes.”

What is your name for the style of Nightmare‘s music?

„It's hard to define. I would say: `Melodic Heavy Metal with choirs and symphonic parts.”

After the explanation of the new album title - what´s your opinion to occultism?

„We are not really into that stuff, but anyway some of the topics relating about occultism could be interesting to fit in our music... Occultism can be considered as a science that is part of life even if its dark aspects can be scary and bewitching sometimes.”

Please be so kind and explain the songs on the album a bit!

„`Cosmovision`: it's a song about the misteries of the nazca lines... that relate the main concept of the album and depicts the cover... it's rather heavy with lots of choirs and a chorus that could remind of Nightwish sometimes.

`Corridors Of Knowledge`: it's quite a fast song with symphonic keyboards at the intro... Telling about how the machine and especially the computers can control the man that created it...

`Spirits Of The Sunset`: one of my faves with outstanding guitar solo by our friend Patrick Rondat. This song tells the story of someone that climbs a sacred mountain of Himalaya (the Nanda Devi - which is a secret sanctuary) and find a passage to another world through the spirits of the sunset...

`The Church`: it's about a novel from famous Italian movies producer Dario Argento ... the king of darkness... It's a mid tempo song that we wanted to be scary as it speaks about a priest that create the decease in a small village in North Carolina.... this priest is killed by the villagers but his haunted spirit still come back to bewitch the village even after his death...

`Behold The Nighttime`: it's a fast song telling the story about someone that wants to travel in time... it's not to far from `Back To The Future` in terms of story.

`Necropolis`: this song is a mid-tempo track about the riddle of the temple of necropolis in Egypt...

`The Cemetary Road`: another scary song taken from a movie of Stephen King... 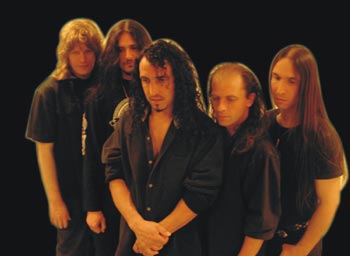 `Kill For The New Messiah`: lyrically it's the story of a serial killer that kills by internet... It's about the power of the machine on man...

`Spiral Of Madness`: it's a mid tempo number telling about someone that fall into madness, that is trapped in the jail of a prison and wants to escape from his actual life by taking drugs and plunging into madness....

`Last Flight To Sirius`: it's a fast song about the sect of the knights of the solar temple... that made a name of themselves with all the collective suicides they did organize quite some time ago.

`Riddle In The Ocean`: another mid-tempo song with lyrics about the riddle of Atlantis...”

Where do you see the global Metal scene in the present and which Metal bands are the bigger ones to your mind?

„Heavy Metal is back... that's for sure but we don't know for how long! The problem is that compared to the past, a lot of new styles have derouted the fans... the arrival of all these extreme styles changed the landscape a lot... I like a lot our label mates Tristania!”

„I hope soon but all depends on the sales of the album I guess...”

Which are your most significant powers as a band on stage?

„The best for us when we are on stage is when the crowd is singing with us the songs... This is a communion that cannot be depict as much as it is strong!”

„I think we have some more concerts to do in the beginning of next year and then we will wait for the album sales and hopefully start to work on a new record... It's been said also that we will do some summer festivals.... wait and see!”

„That we can sell quite a few albums to make another one much better... and so on...”

Some special words to fans and followers finally?

„A million thanx to all for the great support... See you on the road!”