These sheer indestructible speed-bolts are surely one of Sweden´s most diabolic True Black Thrash Metal forces at all.

And the devilish horde as usual also currently don´t miss a possibility, to throw a personal message to everyone out there: Fuck off! Luckily, in spite of it, guitarist Vengeance From Beyond gave me some words about the new raw-rhythmic assault of these massively spiked, arch-unholy executioners.

First of all I have to thank you for doing this interview and of course congratulations for your new album! 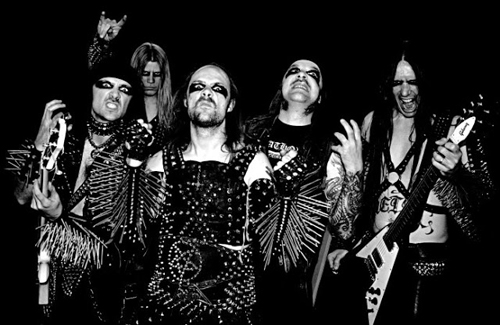 Could you please give a short review about the past years of your history as a musician for all those, who don't know your black thrashing bunch yet?

„Our first album wasn´t released until 1995 as the band had a clear idea about how the music should sound and didn´t wanna rush things. Various members came and went during the years. `Devil´s Force` followed in 1998 and then Demon decided to leave the band. His ideas and riffs has to this day continued to blacken the art of Nifelheim. After `Servants Of Darkness` in 2000 Tyrant, Hellbutcher and Devastator (Triumphator, Satanic Slaughter) decided to get a full line-up to be able to unleash Nifelheim live. Sadist (guitar) and me, Vengeance From Beyond (guitar), have been recruited. We made about 15 gigs before it was time for Sadist and soon Devastator to leave. In 2004 Apocalyptic Devastator (guitar) and 2005 Insulter Of Jesus Christ! joined the band and finally things started to sound good live. Also this line-up gave us the opportunity to finish the work on the new album.“ 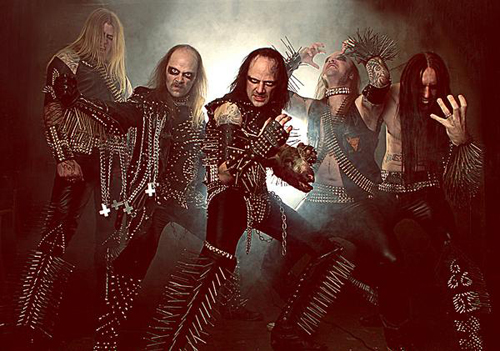 Retrospective – what moments were the best for you in your previous career?

„We made a gig in London 2006 that was pure evil. It was that kind of gig when you think that what ever happens tomorrow you couldn’t care less about.“

Which is still your most inner driving force to create this extreme music?

„Some people like metal and some people are metal. We are still as fascinated and dedicated with the whole scene as we were 20 years ago. This is nothing that will change. Nowadays it´s easy to get inspired as there is so many lame poser bands out there. The whole “pagan” metal scene is so ridiculous that you are forced to run home and put on some Bathory albums on the turntable. The thing that happens in Finland with the pop/tango/opera-fucking-stupid-female/goth/metal bands makes me wanna puke. When you hear something like that and you pick up your guitar the riffs creates them selves in a blasphemous way.“

Five extreme minded musicians in one insane Black Thrash Metal horde – isn´t it difficult sometimes, to get all the ideas fitting together realized?

Let's talk straight about your new album „Envoy Of Lucifer” – what's behind all this? With which expectation(s) have you begun on writing music for this album?

„Some of the songs on this album were thought of long before `Servants Of Darkness` but were never finished. The rest of it were mainly written by Tyrant and Hellbutcher but finished at the rehearsal place by the five of us. We don’t have any expectation when we start to create music. There’s more of a lurking feeling of darkness starting to take form as hallucinating fever dreams. It forces you to create new madness on the instruments.“

Do the title have any special personal meaning?

„Nifelheim is the Envoy Of Lucifer.”

Who or what influenced you in writing the lyrics for „Envoy Of Lucifer”? And what are they exactly all about? Is it a concept album?

„Eddie is the greatest inspiration of all… he he. The lyrics are about total Destruction at the edge of Armageddon. It’s not a concept album.“

What do you want to tell the listeners with your new music and lyrics?

And in general, who influenced and still influences you mostly in making music?

What can you tell mainly about the recording- and production-time in the studio? Hardcore-drinking there?

„Numerous beers went down but we take the recording sessions seriously.”

What can you tell the readers about the frontcover art? Who did it? Kristian Wåhlin?

„It was made by Tomas Holm who has made `Melissa` and `Don’t Break The Oath` with Mercyful Fate. As always there is Satan on the cover, this time with the reaper coming out of his jaws to put an end to life. 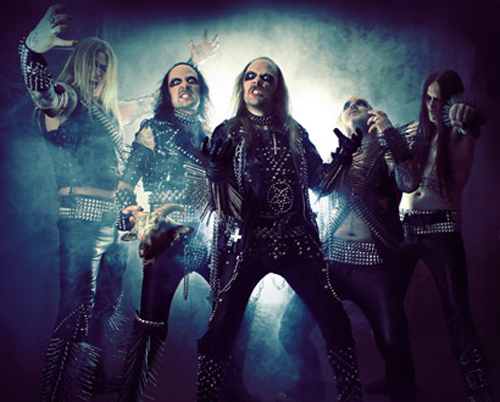 Do you guys planning currently any live gigs in Germany? Exist there plans for a tour?

„Right now we are planning to do an extreme release party probably in Gothenburg/Sweden. So far the focus has been on releasing the album and no tour has been planned jet. We will play at Arnheim Metal Meeting in December but that’s the only gig planned so far.“

What's your opinion about the German (Black) Metal-Scene?

„I’m really puzzled. The Germans were the fucking leaders of extreme metal in the 80’s with bands like Sodom and Destruction. Even bands as Accept were fucking awesome. But it seems like when German bands started to copy the Scandinavian Death/Black scene things went wrong. They just forgot how to do it. German bands should do what German bands do best: German Metal.“

And: what do you think about nowadays bands which do mostly anything (even change the style of music) just to become and stay popular?

Hey, and what's your favourite beer?

Which CDs are rotating most in your player?

„CD? Get a grip! Right now Turbo's `Dorosle Dzieci` is under the pick-up day and night.”