Swedish attackers Necrophobic were formed in 1989 to give the world a band that created pure unholy Death Black Metal.

From the beginning on, Necrophobic had a bit different influences and focused more on to create a much more dark and evil sounding music, in the earlier days influenced by Morbid Angel, Slayer and Bathory.

Their new album release „Bloodhymns” is quite equal to the previous full-length „The Third Antichrist” out of 1999, but with a far more aggressive and heavier production. 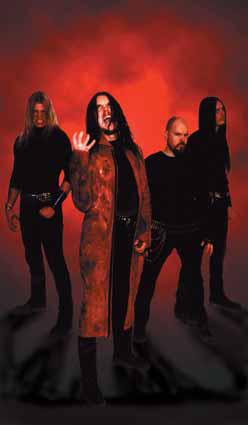 Joakim, how and when the musicians of Necrophobic come together? Please give me a band history, which contains the cause(s) for founding.

„The band was formed by me and David in 1989. We wanted to play unholy Death Metal with alot of dark and evil atmosphere, because around that time, most band’s wanted to play Death Metal music in the vein of the early 90s‘ pioneers. Today the line-up is: Tobias (vocals & bass), Sebastian (lead & rythm guitar), Johan (rythm guitar) and me (Joakim) playing drums.”

In which city in Sweden are you located?

„We come from the capitol of Sweden, which is Stockholm.”

Who has drawn your great band logo?

„His name is Johan Hansson. He used to play bass in the Swedish Death Metal band Crematory (not to be mistaken for the German shitband Crematory that exists today). The logo is fucking killer. He has also made the logos for Unleashed and Unanimated.”

Exists there in Stockholm such a good Metal scene as in the past?

Which of the important Swedish Metal bands have hailed also from there?

„From Stockholm you have bands like Bathory, Entombed, Dismember, Unleashed, Tiamat… and a lot more.”

Which Metal bands out of Sweden are in your eyes (ears) the best in the moment?

„The best band from Sweden right now, in my opinion, is Nifelheim.”

Which were your early idols out of the Death- and Black Metal scene? Which ones have influenced the band in more or lesser way?

„Bathory and Venom, maybe Celtic Frost, are the only Black Metal bands, as I consider, that have influenced Necrophobic. Those bands were around in the 80’s. We are not influenced by the second wave of Black Metal. We were also influenced by Slayer and Morbid Angel in the beginning.” 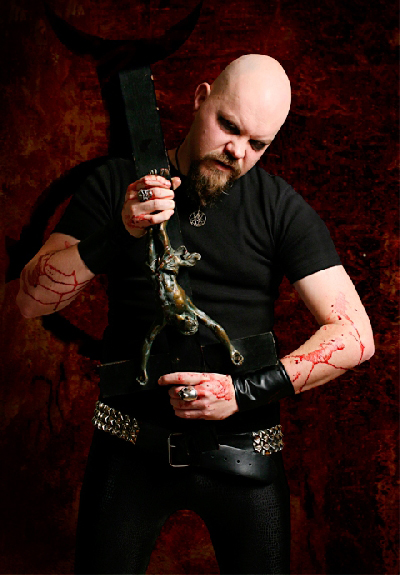 How you have found to the deal with Hammerheart Records?

„They contacted us in the end of 1999 and checked with us if we were interested to switch from Black Mark Production to Hammerheart Records. We still had to make one more album after `The Third Antichrist` to Black Mark, but we started to negotiate with Black Mark for a termination of our contract. It took some time, but finally we were free, so to speak, to sign with a new label and we signed with Hammerheart last year.”

Your current style has been called from your label „Satanic Death Metal”. Are you deep in Satanism and also perhaps Occultism? Or it´s just a metapher for you – to play evil and brutal music?

„No, we are not using this Satanic/occult thing just as an image. It’s what we are. But we don’t call our music Satanic Death Metal, we just call it Death Metal. There are so many people that label music all the time. We’ve been called Thrash Metal also, even Dark Metal.”

Why do you play that style of Metal, or better said, what do you trying to reflect from out of your mind with the music? Aggressions? Hate? Antireligious beliefs?

„We love this kind of music, therefore we are so great at it. Making this kind of music lets you write about the topics you just mentioned… Anti-religious, hate, darkness and evil and the music is really aggressive… powerful!”

„It’s just a name we took from the Slayer song from `Reign In Blood`. We actually didn’t care about the true meaning of it, it just sounded good. I guess necrophobic stands for being afraid of the dead so that you have to slaughter everything you see to feel good.”

„There are ten songs on the album, ten hymns … ten bloodhymns. It’s a great title for this album, but it’s not a concept album. It deals with a lot of blood, among other stuff, but sometimes blood have a big importance for a song, but in another song, less importance.”

Please be so kind and bring the meanings of the songs out of your new album a bit closer!

„I think it’s better for the readers to buy the album and read the lyrics themselves and get their own opinion of what the lyrics are about. We’ve written the lyrics to explain something from our point of view, so why be like a stupid Christian and force people with an opinion, brainwash them so they just follow whatever I say. Read for yourself and build your own opinion. There are no rules! If you want to think that `Taste Of Black` is about the taste of a black womans pussy, fine with me, as long as you think it’s about that. I hope you understand what I’m trying to say to all of you here. Think for yourselves!” 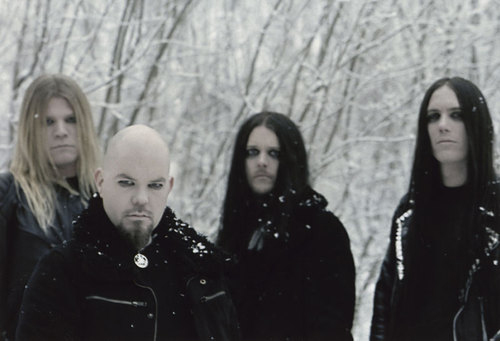 Which were (and still are) the inspirations for the music of Necrophobic?

„It can be everything… A book, a movie … even a painting…”

What is your definite artistic goal with Necrophobic?

„We don’t have any exact goal, but we wanna do this music as long as we feel we can write such great stuff. We want as many people to hear it and we want to play in as many countries as we can. There is such a cool feeling being on stage, playing your own music that you love and see peoples reactions… headbanging. Fucking great!”

Upcoming live gigs of Necrophobic: anything planned in the moment?

„Right now, a tour is being planned. There are still some places to be confirmed. When everything is ready, you can read everything on our website at http://www.necrophobic.net. We are also booked for two German festivals so far. The festivals are the great Wacken Open Air, but also a smaller great festival called Party.San. Come and see us if we play in your area!”

Plans for the future – musically and private?

„Right now, I’m studying graphic design and will do that ’til June. In June the tour will begin and then there’s the summer festivals. Thanks for the interview!”