These outstanding fine recording features eleven truly superior compositions with a lyrical inspirational basis in ancient legends and tales from the marvellous Ringerike region of Norway, where Lars grew up. He didn´t hesitate and announced me some information about the new output.

Lars, how are you doing at the moment – longing for a trip in your great environment?

„The last weeks I have just been living the easy life and relaxed a lot. I moved out of my mother’s house earlier this year, so now I live in a small cottage-like house located at the place where I grew up; Åsa. In other words, I live in a great environment, so no need for trips right now, hehe.“ 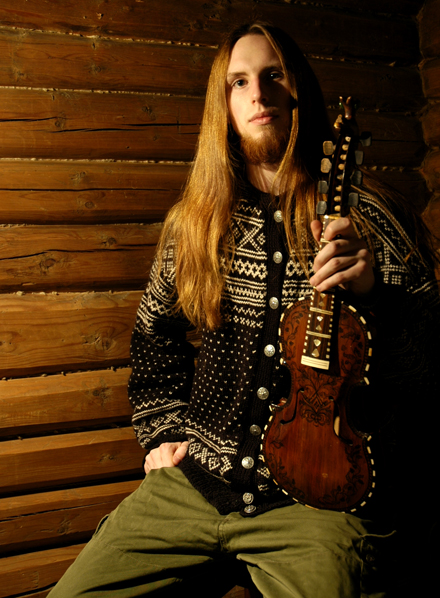 Btw, what do you think about the sick mankind?

„I am a part of mankind; you are a part of mankind... Seriously, I don’t care a lot for what is going on around me anymore. I’ve gone through the phase of being mad at the world, but it doesn’t really give you much at all except even more anger. Therefore I have a more non-caring approach to different aspects of life nowadays. The planet is overheating, the poles are melting; it seems a lot of things are doomed. No matter how hard a group of individuals will ever fight to prevent things like this to happen, they will always be out ruled by the majority.“

And what do you think about the more and more executed damage of our holy mother earth?

„Am I allowed to answer anything else than that I think it is beyond horrifying? Well, that’s just what it is. Even though it’s no real threat, I always get irritated when I see they are cutting down parts of the forests in the area where I live. The forests are what make this place beautiful, and they should at least not cut down big areas of wood and only leave a scarred earth behind. About a year ago I was out taking a stroll in the woods, and I discovered this very atmospheric small place with a huge, twisted tree in the middle of a circular area, with sunbeams shining through the tree crowns. I didn’t have the best photo equipment at that moment, so this summer I decided to go back with some better gear and get some nice shots of the place. To my horror, they had cut down the entire area! What before had been an area almost impossible to walk in, is now a flat, brown and ugly place. At first I thought I had made a wrong turn somewhere, but they had let the tree stand. Depressing happenings indeed.“

Lars, please describe me your attitude as a musician and in which life-philosophy do you believe!

„I try to stand for an as honest work as highly possible! That’s my main ideology, everything else is mere details. Okay, that was an exaggeration, hehe. Both as a musician and as a person I try to be as honest in what I do as I can, even though it may cause some problems for both others and me. I don’t like giving other people a hard time, but if I’m in a disagreement with someone, I can and will be pretty stubborn. Else than that, I live my life pretty normally with similar thoughts and actions as other human beings. The only exception is that I always think twice (or three times, for that part’s sake) before I utter my thoughts.“ 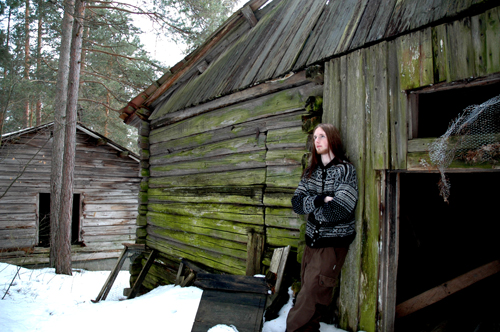 „I can understand that a lot of people have the need to feel connected with something spiritual, even though I am in no way religious. Either way, I understand that many people are, and I won't try to give them a hard time because of that. All the damn nihilism in the metal scene is for the most of the time just stupid as well. The spirit of it died quite a few years back, and what is left has no worth.“

Still seems, as the only god for rotten mankind is dirty money, since it has been invented. What is your opinion about that topic?

„I partly agree. But since we have money, and never will get the whole principal of money out of the world, we’ll just have to cope with it. The hard and simple truth.“

How has the musical style of Myrkgrav been found?

„I guess it just happened one day, when I was sitting around and playing the guitar. You know, the first song I ever wrote for Myrkgrav was Tjernet, back in 2003. That song kind of laid down the sound and path I would continue to wander musically, at least in the nearest future. If you listen to the two oldest songs on the album, namely Olav Tryggvason and Tjernet, you will notice that they sound quite alike, as they were written in the same period. The rest of the songs also share a lot of the same elements, but I think you can definitely tell that they are more of an evolvement from Fra Fjellheimen Kaller...“ 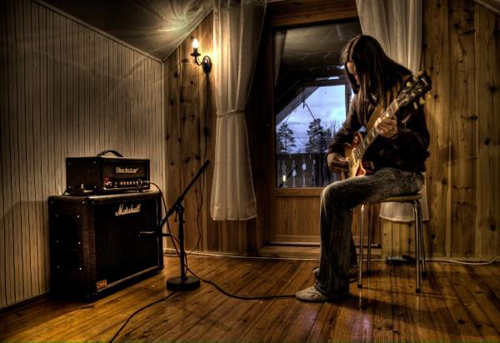 In which special mood(s) do you feel your most and best creativeness?

„I’m never very creative anymore, hehe. Actually I haven’t written anything new since Finnkjerringa, which was written in June 2006. It’s kind of sad, since I would really like to be able to just continue to compose songs as easily as before. I guess it’s easiest to write music when life is a bit hard to get through, and since things have been going my way and generally been great the last year, I haven’t had a lot of inspiration to do musical things. In other words: It’s more giving to write music when in solitude and dark times.“

Please tell me some musical influences for your upcoming compositions!

„I have no idea yet. So far, I’ve just recorded a couple of traditional folk tunes, in order to not get totally out of practise. It’s not impossible that I’ll just make an EP containing more or less just folk songs, as a pause between more extreme metal releases. It’s important to vary your method of work, and I think this might be a positive way to get ready for making new and unheard compositions.“

Please describe the readers the lyrical conception of the new album release and please tell me some lyrical influences for these compositions! 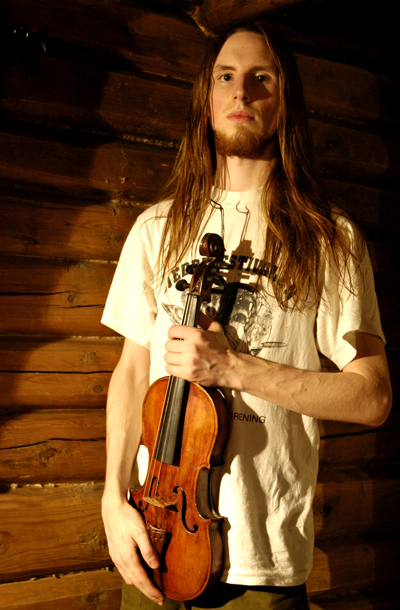 „Well, the lyrical concept is quite easy to describe. All the lyrics evolve around daily stories and other legends from my local area, Ringerike and Hole. The reasons for my choice of lyrical themes are many, but one of the main ones is that the stories I use for the lyrics often never have been read by anyone else than the very few owners of the dusty old books they are published in. The idea of giving them a time of honor unlike any they have ever had before is a thought that means a lot to me. Another point that comes along is that I of course would like to give the project a certain originality and identity; something I feel I have accomplished successfully by incorporating local history into the music. I guess I will continue to use this concept for following releases, due to the fact that it inspires me a lot to work this way. I already have a plan for how I shall take everything a step further, but I’m not revealing anything yet, as it’s not 100 percent clear. Wouldn’t want to give the fans hopes I can’t go through with, hehe.“

„Not very deep, hehe. I’m more into local events and small happenings than mythological legends from Norse times. Everyone knows and can read about every little detail concerning the Norse gods, so I’m fonder of studying things that are harder to find information about. Everyone wishes to learn more about something, and in my case it’s all about local history. Of course I also enjoy sagas from Iceland and Norway in Norse times, but I don’t think it’s as interesting as small stories filled with integrity from Ringerike.“

„Well, I attend school. I’m planning to be a sound technician some day, and even though it’s more tempting to just build your own studio and give a shit about studies, it’s better to actually get an education. Else than that, I don’t do very much. My life mainly revolves around music, studies and my “family life” together with my girlfriend. In other words: A very average life, hehe.“

What contains a really good Myrkgrav song in your personal opinion? 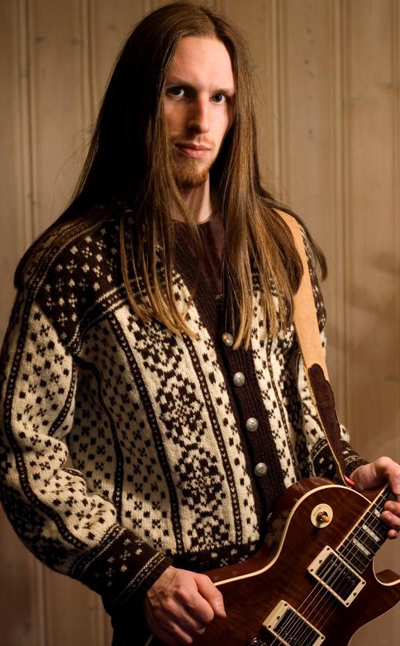 „That could be many different things, and it all depends on the particular atmosphere in a song. I guess what I’m trying to say here, is that I haven’t got a clear answer to your question. Either way, I always try to build a song around good melodies and riffs. I never just put a riff in a song just to fill it up with something; every little part has to be worth including.“

Do you like the other bands in that style? Please tell me your favourite bands!

„Many of my favourite bands are in the Folk- and Pagan genre. Some of them are Månegarm, Doomsword, Moonsorrow, Falkenbach and Thyrfing, just to mention a few. I also like more pure Folk music, like Fejd, Dvergmål, Tiriltunga, Bukkene Bruse and the likes.“

Got the chance to play live with Myrkgrav last year? Where?

„Myrkgrav hasn’t played live yet, and I doubt it will ever happen, due to the fact that it’s almost impossible to find dedicated and talented session musicians in my area. I guess I would have incorporated a few typical folk music elements in a live show, such as dancers and Hardanger fiddle players who could have held a show in-between the actual songs. But I imagine it would have been great to play at Ragnarök festival in Germany!”

„Now that’s a tough question. One of my dreams is making Myrkgrav more of a Folk Metal band than it is today, and to incorporate more folk instruments in the sound, such as the Hardanger fiddle and the “Langeleik”. I think it would have been quite unique. When it comes to temptations, I haven’t really come across any yet. I don’t fall that easy for temptations either, hehe.“

„Right now I have no plans, and I’m kind of stuck in-between choices. Either I’ll try to write some all new material for an album, or I’ll re-arrange some folk songs for an EP. Either way I guess it will be some time before anything new is unleashed under the name of Myrkgrav, since I appreciate taking my time getting everything just as I want it before it’s released.“