One of probably the most straightforward representative of the entire slow rhythmic Metal range present these five deadly serious looking Irish. With seemingly manic depressive Doom Death Metal have Mourning Beloveth, mercilessly uncompromising as ever, filled even their current third album „A Murdeous Circus“.

What the famous My Dying Bride once stylish and full-bodied began at the beginning of the 90s, which was then passed with flying colors by bands such as the recently resolved US philanderers Morgion, exactly through these lightless sound cosmos travels this proud quintet from the Emerald Isle again in all sorrowful grandeur. 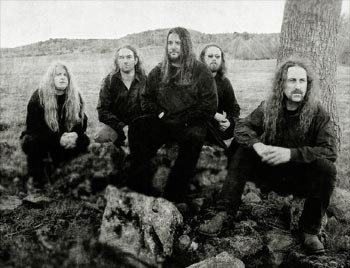 Brute singer Darren Moore deviates for me from his microphone.

How are you feeling these days and which expectations do you have for the new album „A Murdeous Circus“?

„We are all great. Just back from recording our third album „A Murderous Circus“ and we are really looking forward to its release. As for expectations, we never have any. We take everything as it comes and everything that happens to us is a bonus. We never thought when we began many years ago that we would release a third album. All we started out to do was play in a band but now we have the opportunity we will try to play as many gigs in as many different countries as possible so in supporting the album hopefully we will see the world.“

You are vocalist in an extreme Doom Metal band. What really means Doom Metal in your own opinion? What message delivers it for the true followers?

„Doom Metal is probably the only remaining sub genre of Metal that has not been touched by commercial aspects. It is music for people who are in to music because they like it, not for some trend. Doom Metal is thinking mans Metal, music with feeling and passion. I don't think there is any message in Doom Metal because as a rule for most doom bands it is a cathartic process in which they are releasing the negative feelings that build up inside and each person takes from that what they want or need to. Doom is so underground you gotta move the rocks to see and hear it but the past few years has seen major movements in the scene and there are always bands touring in April and October now, doom bands which was unheard of before. There are so many Doom festivals during the summer now like Doom Shall Rise, Belgian Doom Night, Dutch Doom Day, Ashes to Ashes so things seem to be moving in the right direction. It always amazes me that you listen to doom on CD and it is such a personal thing but when you see a band live it gives a completely different feeling to the music.“

Which are your other hobbies beside the music?

„Myself I am also a co-editor of a magazine here in Ireland called Metalworks. I also run a shop in Templebar in Dublin selling Metal CDs and vinyl so basically my life revolves around music 24 hours a day... haha“

Were there any problems in Mourning Beloveth since the days after the release of the last album?

„I don't think we came across any problems after the last album, we toured three times, twice in Europe and we also toured America for 1 month with our friends Prophecy and Orodruin so the last album really opened some doors for us as it is very rare for an Irish band, even an Irish Doom band to tour at all so it was great for us to go to countries like Portugal and Spain and see the passion in people there and realise how we are all so close in so many aspects. We met so many friends on the road people we still are in contact with today and today for example I am putting on a gig in Ireland for some friends of ours from Officium Triste form Holland and Thee Plague of Gentlemen from Belgium just to say thank you to them for the gigs they have arranged for us over the years.“ 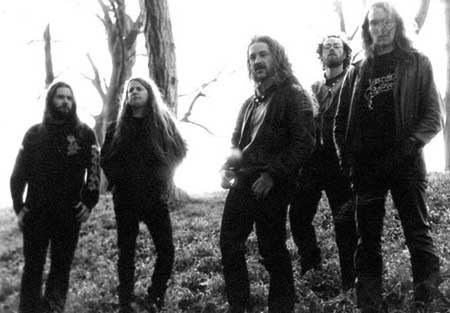 Are you fully satisfied with the songs of the new album „A Murdeous Circus“?

„As every press release would say this is probably our best yet haha. But yeah we are 100% satisfied. We went to a new studio for this album and a new producer so we were a little nervous but this being our third time in all it wasn't too bad. Also the songs this time round are a little different than before and we were also nervous about that. In fact after two weeks our drummer and one guitar player went home and so thay only heard the finished product about one week later so it was almost like two new people to judge the music and they were completely happy with it. For me it was probably the most relaxed we ahve ever been ina studio and the extra week did help as we were able to experiment with certain stuff which we never were before.“

Which are the most musical differences to the last album of Mourning Beloveth?

„Differences, probably this album is our most diverse to date, we have some more uptempo parts and different styles of riffing instead of being completely slow and downtrodden all of the time. We did it mainly for ourselves to keep ourselves interested in the music. Also this time round I have tried a few different vocal styles where as on the last album it was completely guttural growls all the time. Also the clean singin by Frank is less evident on this album. it is still a Mourning Beloveth album, slow, heavy and dark but with some added dimensions this time round.“

Which feelings were in your mind during the composition process for the new release of Mourning Beloveth?

„We knew when writing the album that there were certain parts that did not sound lie anything we have done before so we were slightly worried when recording as to how they would come out but when we recorded them all of those fears were laid to the side.”

Your influences, musical and lyrical?

„Influences range musically from AC/DC to Skepticism, we are not narrowminded doomfanatics and any band that has feeling and passion for what they do is what we are influenced by. Our sound is probably closest to the early years of My Dying Bride and Anathema and Paradise Lost as this is what most of our early reviews say but they also say we have a certain sound of our own, maybe being Irish people look at us in a different light. We play what we play and everything we listen to obviously has an influence. Lyrically, I read a lot of philosophy and poetry, Keats, Yeats, Kavanagh and I have just finished some books by Irvine Welsh („Trainspotting”) but generally we live in a world of shit that is corrupt and trying to grind us down and we try to blank this out through music.”

What is behind the title of the new output „A Murdeous Circus“?

„The title is almost contradictory, „A Murderous Circus” – everybody thinks of a circus as fun and colourful, supposedly just like life, what it is the life we lead drinking and having fun is also having the negative effect on us in that it is killing us, like Ozzy once said "killing yourself to live" so what we try to do to live is killing us.” 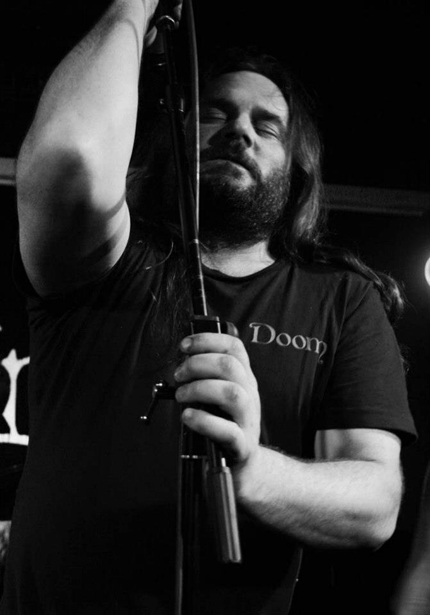 Which lyrical content contain the new tracks of Mourning Beloveth in general?

„Yeah I wrote all the lyrics and they deal with our struggle to wade through the filth of the earth just to seek out our own little world, a world where a need for excess sometimes brings balance...as Keats said " the road of excess leads to the palace of wisdom" it is almost like a debauched enlightenment but we are not looking for enlightenment, just an existence away from the filth and corruption.”

To my mind the lyrics of „A Murdeous Circus“ are very dark and sombre. Is singing a self-therapy for your own soul?

„Yeah the music and lyrics for us are pure cathartic and we write music about what is happening in our lives. Obviously we do not write about the last football game we went to as this is a source of enjoyment but we write about the negative things in our lives, be it a relationship or even questioning the reasons why we push ourselves to the limit all of the time.“

The conception deals surely with some topics of death. How do you want to die someday? And how do you wish to be buried someday?

„We deal with death but in the metaphorical way in it may be the death of something which was bad for you or that ominous feeling of dread you get when you think of death. I generally do not think about death but to die sleeping would be best and then to be cremated and the ashes spread across the sea would be perfect for me.“

Who did made the frontcover artwork for „A Murdeous Circus“?

„Lukasz, the Prophecy artist did the artwork and some people have mentioned it is similar to Travis Smith if not just for the colour scheme used.”

Are you fully satisfied with it?

„We are all very satisfied with it. Lukasz had bene showing us some pictures of broken down buildings and shit like that but none of them really stood out as a front cover. When he showed us the picture of the girl she is so beautiful and yet so dark and full of melancholy we just jumped at the chance to use it. The picture was taken by a friend of the artist and it just suits the album perfectly.“

Which bands do you prefer out of the Doom Metal area?

„Reviews of the last two albums say My Dying Bride, Anathema and Paradise Lost but they all say we have our own feeling and that is good. Hopefully for this album those names will not be mentioned again and we can stand on our own musical background. It is great to be compared to these bands but it is also nice for people to realise we are our own people.“

What is your personal view about the „modern-day” Metal scene?

„So many bands, so many shit bands… The bigger labels realising shit that we always delve into the underground to find bands with feeling and passion how only do it for the music and nothing else, not to try to fit into some scene. It is always a good feeling when you discover a new band, wait for their tape or CD in the post and when it comes it makes you proud that you have found this band.”

„We have three more albums with Grau Records so we plan on staying aorund for a while, this summer we are trying some festivals and we are playing Paris on April 14th and Dutch Doom Day on October 1st 2005... Hopefully some gigs in countries we have never played before.”