With their first albums the Swedes around leader Goth Gorgon were able to make a first-class name for themselves in the scene. Fame that lasts until today.

For many years there was silence in the camp of the qualitative elitists, now they are returning determinedly. And the Black Metal of Mörk Gryning, which is not only stirring with intensity, originality and melodic noblesse, has not lost any of its exorbitant significance, as the new album „Hinsides Vrede“ proves.

Goth, who is called Jonas Berndt in real life, sums up the break of 15 years as having felt much longer.

The first new album in whole 15 years of your own band - how does it feel for you? A 'rollercoaster' within?

„Yes, definitely. And it feels more than 15 years because ‚Mörk Gryning‘ was quite different. The line-up was different and we all helped put the songs together in the rehearsal room. This time it was more like going back to ‚Tusen År Har Gått‘, 25 years ago, with just me and Kimera putting it together.“ 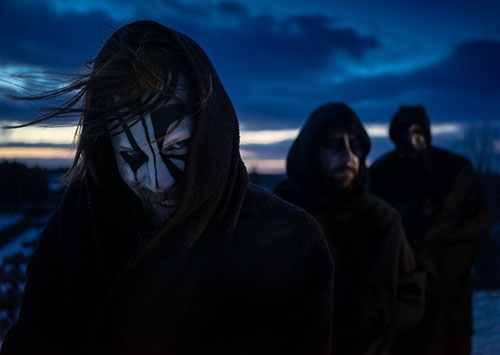 Which way and why did you decide to create a fully new album?

„I’ve had ideas spinning in my head all the time but never enough for a whole album. It was after the gig at Kraken (‚Live At Kraken‘ vinyl) when we decided it was time for a new album. It was cool that people still remembered us after all these years and it gave us the inspiration.“

What is your own assessment of the new manifesto?

„We’re super happy with it. We really put our souls into it and tried to connect the best parts of our past into something new, which still is very recognizable Mörk Gryning, and I think we succeeded. So it’s a varied, yet direct album that doesn’t take you 10 listenings to get into, but there are still a lot of layers to discover.“

And there's true quality luckily - „A Glimpse Of The Sky“ bears lots of ‚Classic Mörk Gryning‘ - who composed this song and did you guys were electrified as in the good old days while writing such great songs?

„Thank you. I had had some ideas for ‚Glimpse‘ for some time and I wanted this epic Bathory feel with the 6/8 beat. I’m really looking forward to playing it live, it’s a great song and the groove is good.“

Also „Sleeping In The Embers“ is great … who composed this song - and how did you manage to re-cultivate the old spirit of the band so well and authentically?

„It’s the only song that we composed completely together, probably that’s why it has ‚the old spirit‘ as you say. It’s also an epic piece but more in a ballad sort of way than ‚Glimpse‘. It’s simply a prophecy of doom: ‚Hear the choir, hear it sing, it’s the chorus of our requiem‘.“ 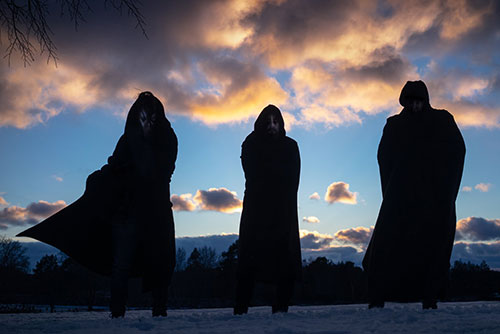 Were any ups and downs during the songwriting for „Hinsides Vrede“?

„Not really. The main part was written during November/December 2018 in a very compressed, intense process.“

Since you disbanded the band at the beginning of 2005 due to a ‚lack of interest in extreme Metal‘ - are you back on the right track for this style now?

„I’m definitely back on track playing it, I love it just as much now as ever. I don’t really listen to much new bands but I try to check out every once in a while what’s going on.“

„I think you change all the time. If you try to stay the same you’ll just stagnate. It feels like we’ve come to the top of the mountain somehow, I’m not saying that there’s no good art anymore, but it’s a long time since we had a band like Zeppelin or Slayer if you know what I mean.“

„Thanks a lot for the interview. I truly hope we can get our asses on the road in 2021 so looking forward to seeing you then.“