Half a pagan eternity seemed to have lasted until these five Finnish full-moon souls finally had their new song collection „Varjoina Kuljemme Kuolleiden Maassa“ in a heavy box.

Translated, this tongue-breaking album title is „As Shadows We Walk In The Land Of The Dead“. And that's exactly how the whole thing sounds. Spooky, deeply dark, cold and highly mystical. The Nordic Viking Metal quintet around vocalist and bass player Ville Sorvali remained faithful to the popular and proven style, but also created some epic songs with an overlength.

But for the Scandinavian tension specialists Moonsorrow, together with its well-known tendency to folklore, it is fortunate that there is no difficulty in designing a 30-minute composition, such as "„Hävitetty“ consistently attractive and interesting, despite its complexity. 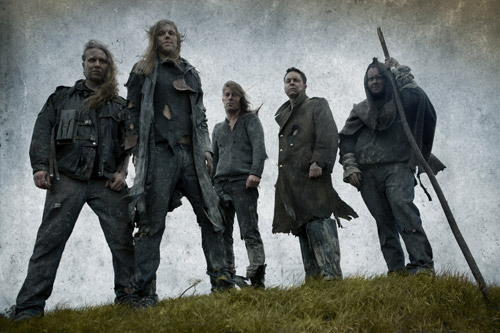 The current interview with guitarist Mitja Harvilahti is just as interesting.

Moonsorrow’s music is still unique and hypnotic. Which heads behind are necessary, to create such a majestic and longing sound?

„I hope we have a unique way of doing things. Much of the musical content and the kind of musical spirit we have comes from Henri´s mind and he surely is a great composer with a personal sound. After all these years of making epic music we have evolved very much as well. We could´t do stuff that´s on the last 2 albums 10 years ago. It´s been a progress to this direction.“

What are you doing in your free time besides the music? Guess, many fans of your epic art thinking about forest-lovers and nature-worshippers concerning the members of Moonsorrow.

„Well, I am quite a nature lover actually, but we all have a very urban lifestyle after all. Most of us have day jobs too. I work as a cameraman for the national broadcasting company, so I do everything from TV-drama to news, and i also work as a freelance photographer and video editor. I don´t find it a dream of mine to make my living off music. My dream and goal has always been in this band and to do things as well as I can with it. Touring and playing with these guys is what I like to do most, so if I had to be completely dependent on the music, it would also create lots of pressure. Henri works as a sound designer for computer and mobile games. Ville is a music promoter. Marko works at a big technology corporation, and our Conan The Barbarian Markus drives those big asphalt machines during the summer.“

Did you ever expected to become what you're now, such a deep thinking musician?

„Well yes and no. When you start playing and writing music, you really don´t know the realities of making music and music business. I always wanted to play guitar. Since I was 2 years old or something. I´ve been through a path where i started to take lessons at the age of 4, went to school and started bands, and later on met the Moonsorrow guys. If I had chosen a different school or friends, you never know if I would play in this band. I could be just as excited about playing in a crappy club in a town nearby for 15 people as I am now to play huge crowd in Mexico. The most important thing is to enjoy what you do. If you do it as well as you can, I´m sure someone else will like it too. And most important thing is to make the kind of music you want to make. And to find your own way to do it. Education is very important factor as well. Especially when you create the complex kind of music as we do. It´s good to know how you can make the things work, in theory as well.“ 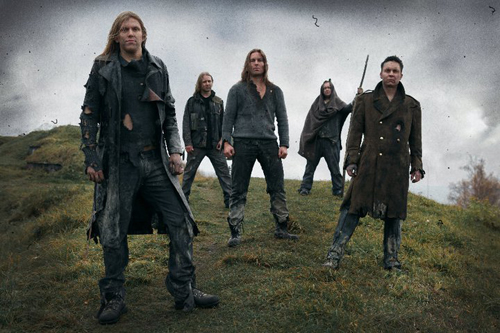 Some songs on the new Moonsorrow output do have massive lengths, while others are pretty short. And the new material sounds mainly pretty complex, pretty progressive - how did develop the whole thing until that result?

„I think we developed to this stage one step at a time. The development have been very logical too. We have found new ways to do things on every album, so we´ve taken it further every time. We don´t make music that´s purposedly complex or progressive. Sometimes the songs just grow into a more diverse and progressive shape.“

What are you still looking for in terms of development of Moonsorrow’s musical style?

„Well, we always want to renew our approach to our music. If there is nothing to give, then we won´t even start making the record. Stylewise I think there are still elements we haven´t incorporated in our music so let´s see what happens next!“

The new record „Varjoina Kuljemme Kuolleiden Maassa“ - what important details are there to mention or are there new, musical facets to be heard?

„It is a concept album once again, but this time we wanted to make shorter songs. We wanted to make a very cinematic album too. Everything about the album, and the cd cover too are part of the concept. There are tracks that consists of soundscapes rather than music/lyrics, so we included photographs to further explain what is happening in those songs. Nowadays when people download songs here and there, we wanted to give something special in form of the booklet to appreciate those who still like a physical product more than an mp3. Concept albums greatly suffer from breaking them apart by listening the songs as random mp3´s.“

What is behind the title of the album?

„It means: As shadows we roam the land of the dead.“ 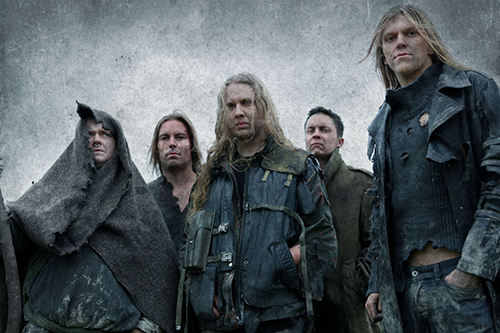 „It´s a very post apocalyptic album. It´s a story of the few people that have survived the "end of the world" and they walk through the destroyed world, trying to find a way to survive. They can´t see how we got so far that we destroyed the life on the planet. The people turn against each other and the last song is about the thoughts of the last man alive.“

Any hopes for the new Moonsorrow release?

„I have no hopes, really. I know we have done a great album that I´m proud of and I let it take me where it will. Perhaps nobody likes it but if all goes well it will become an important album to many people. But if I hope something, it would be that we can tour a lot with this release.“

What's your ideal song on the upcoming record and why?

„I like the first song most. It has the very dark empty mood through out the song. Something we have not had before.“

Be so kind and tell about your proudest own achievement on these new album!

„Hmmm… I must say that the fact that we put this album together very quickly and we did not rehearse the songs together even once, but still managed to make it better than I could dream of. That´s a great achievement to me! I´m very proud of the sound on this album too. I think we managed to create an organic but very violent sound and the production is better than before.“

16 years of existence lies behind Moonsorrow - when you are thinking about all these time, what's going through your head?

„"What??? Wow. That was fast!" Seriously, the last 10 years feels like an extremely short period of time. I joined the band in 2000 and the 11 years have been the best time of my life.“