Already with their debut album „Suden Uni” in the year 2000 they knew to celebrate their unique epic and majestic style highly, as well as with both album successors „Voimasta Ja Kunniasta” and „Kivenkantaja”.

Hey Ville, how are you all doing these days?

„Stressed and troubled, otherwise fine. Thanks for asking.” 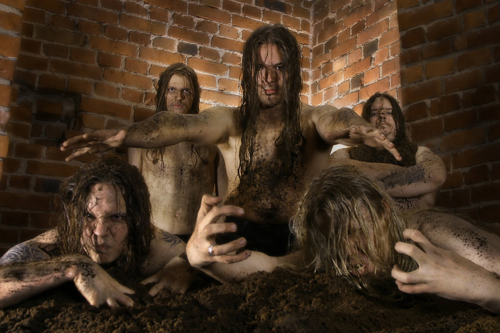 Which things are you guys doing in your rare free time these days? Hangover in woods? Haunting for Trolls?

„Hangover in the woods would be interesting to say the least. What comes to trolls, I don't believe in them. Nah, I just listen to music, drink beer and hang out with my friends and acquintances. Nothing special. I like to be boring.”

Where has been the new output produced?

„At Tico Tico Studio with the master Ahti Kortelainen.”

„The only uninterestingly relevant thing is that we made an album. We also threw javelin at the hotel hallway, ran around naked and thought we broke the TV so we couldn't watch any movies.”

I have heard some little changes in the style; even more silent and epic elements than ever before in Moonsorrow. Reason(s) for this?

„We just felt like doing something different after "Kivenkantaja", and didn't give it a thought for over a year to be honest. We started writing new material last summer, and it was clear that it was going to be different, even if we wouldn't have intended. It happened so smoothly, so naturally that it doesn't make justice to the process to try to explain it.”

How long did it take to do the complete song writing of „Versäkeet”?

„Huh, I think the whole process took two months of intensive composing and pre-producing. But that's how we do it. We totally concentrate on the songs when we write them, and only rehearse afterwards. Coming to the studio everything should be ready.” 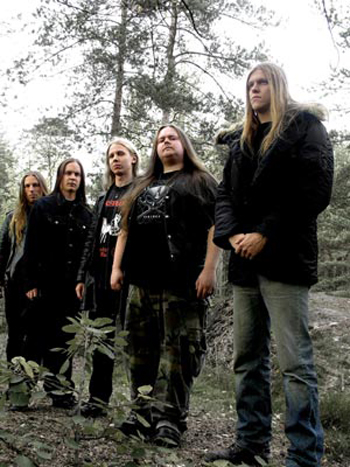 How would you describe your new music to uninitiated listeners?

„It's epic heathen Metal, as always, this time colder, harsher and rawer than on the previous albums. Back to the roots, kind of.

Your own opinion about „Versäkeet”?

„The best we have ever done. Never 10 points on my scale, but always closer.”

„The feedback has been surprising, because I would've expected more criticism and cautiousness about how the album sounds like. Of course we got some carefully low-scored (7/10) reviews, but generally, people really seem to like it. Of course the press doesn't interest me as much as the fan reactions, or actually, it doesn't interest me at all. Looking forward to the release date.”

Are there any bands as influences for your newest songs to mention?

„The immortal work of Bathory always inspires us, as also many of the early black metal bands, progressive rock, folk music... the list goes on. We are still just fans who listen to the music and happen to make something of our own on the side.”

Btw: which other Metal acts do you really like? Which are your favourites these days?

„There are few good bands, but still so many I wouldn't even try to list them. The last album that really struck me was Primordial's newest, total genius, absolutely.”

What has the new album title „Versäkeet” to mean?

„"Bloodverses", blood as an equal symbol for our roots and for death.”

Which ones out of the band composed the new heroic and overwhelming melodies?

„Our guitarist Henri Urponpoika Sorvali composes the most of the material and our drummer Marko Tarvonen participates at some songs. The others don't usually write anything, this time I happened to write one riff though. The whole band participates in the arranging process when the songs are written.”

Which were the main lyrical influences for „Versäkeet”?

„Just things that I thought when writing. I tried to make a more abstract concept this time without any clear storylines.”

Please tell me about the lyrics of the new songs itself! Which conception exists within? 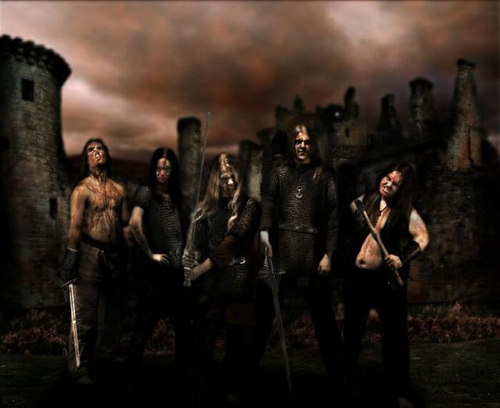 „All songs have something to do with blood in a way or another. The point is to remind people of who they are and where they come from, and also to describe the strength and power of nature.”

Who did the new front cover art?

„The whole booklet was designed by Tero Salonen.”

„I think it's very cool, and it totally fits the concept of the album. Cold and dark, as the music and the lyrics. And with lots of blood.”

In which position between other Scandinavian Metal acts like Finntroll and Ensiferum for example do you see Moonsorrow now?

„Moonsorrow is in a totally different place.”

How looks an upcoming live show of you guys?

Do you have any expectations in mind, regarding the new release?

„I don't have any expectations if you mean what I expect from the sales. Success is irrelevant to me. I just hope people could find the album and give it a little time.”

„A few gigs and loads of beer. Bratwurst!”