Endless bestial, but in the same time immense symphonic and bombastic, their music can be best described as the perfect soundtrack for the once coming apocalypse of this sick world.

The melodies, which Misteltein use, sounding really marvellous. With such bewitched and scary tunes they can be sure, to have forever a place deep within many devoted blackhearts.

Misteltein was started in dark autumn 1996 by Seron, Nagrinn, Karagat and former drummer Alex. The goal was already at this point clear, to create the best music possible within the extreme Metal genre without tying oneself to a specific area.

After some unserious record-deal offers the band finally signed with No Fashion Records in May 1999 and shortly after entered studio Underground in Sweden to hell-raise their debut album, the furious „Rape In Rapture”.

After some problems with the choice of studio Misteltein decided to record their long awaited second album. And the result is without any single doubt astonishing. 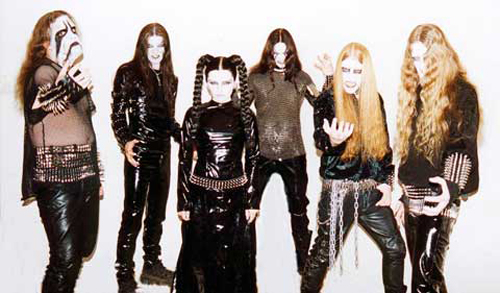 „Divine.Desecrate.Complete” shows one of the best bands of the whole genre.

Guitarist Nagrinn is the possessed string-torturer inside this hellish horde.

At first the talented axeman reports about the current situation in the bandcamp of Misteltein.

„After the recording of `Rape In Rapture` guitarist Baalzephon left the band. He was replaced by Mishrack. The growl-vox has been taken over by Karagat. But in the whole we´ve had this line-up since almost the start except for the latest change. Our line-up is now: Seron - vox, Nagrinn - guitars, Mishrack - guitars, Karagat - bass/growl, Hel - keyboards and Nirag - drums.”

As one can easily imagine, Nagrinn is curiously about the upcoming months, which will follow the release of „Divine.Desecrate.Complete”.

„Yes , I am pretty curious about the responses of `Divine.Desecrate.Complete` since `Rape In Rapture` was either hated or loved. `Rape In Rapture` was often compared with bands such as Dimmu and Cradle. I didn´t think there was that much similarity since we hadn´t used them as an inspiration-source at all. Anyway, the new album is a great step above the old and also from the bands I mentioned. The fans who liked `Rape In Rapture` will not be disappointed. It has only become better.”

The band´s name has a very interesting meaning, argues Nagrinn.

„Our name is taken from the Northern mythology. Misteltein is the name of the misteltoe-arrow that killed Balder, the god of light. I think the symbolic suites our band fine. It kind of speaks for itself…”

Before the release of their debut album Misteltein brought a meanwhile pretty rare demo.

„As you know, `Divine.Desecrate.Complete` is our second album. The only recording that was made before `Rape In Rapture` was a demo called `Spawn Of The Phantom Moon`. The demo had three tracks and two of them were re-recorded to be on the `Rape In Rapture` album. The tracks were `Nevercoming` and `Autumns Misty Might`. The demo is very rare these days, I don´t even own one myself. But there has been some discuss of print them again as many people has asked for the demo.”

Nagrinn explains the meaning of the title of the new release:

„`Divine.Desecrate.Complete` was an suitable title since the concept of the album is a musical and artistic rape upon the holy and pure and life itself. It´s simply a hate-package adressed to this world.”

After the finishing of the songwriting the guys went to Malmö and had a great time there.

„The album was recorded in Berno Studio in Malmö, Sweden which is a really great studio with competent people. The album took about three weeks to record and personally I am very satisfied with the result The sound is a step above `Rape In Rapture` and it´s more Misteltein. More the sound we didn´t got on the last album.” 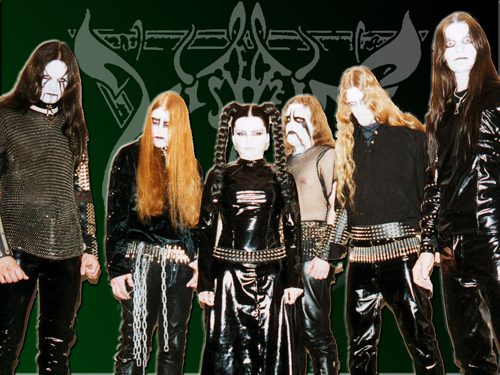 Nagrinn can´t give an exact time, how long they had worked on the writing process for the new songs.

„Hard to tell since we perhaps wrote three songs in a month and then no one in the next. But I think we started a couple of months after the recording of `Rape In Rapture`. But we had some songs that we decided not to put on `Divine.Desecrate.Complete`. Right now we are just rehearsing for the tour and we´ll probably start to write as soon as we get home. There are a lot of new material already to work on.”

„The `main-composer` will probably be Nirag since he had written something in almost every song. Then there is me and Mishrack also writing. The guitars is often developed by me and Mishrack. It often starts with someone having an idea or half a song ready then we all develop it.”

The same goes for the lyrics of Misteltein.

„Karagat has written most of the lyrics and then there is me also writing. I, myself usually writes listening to classical music or just in silence inspired by my own thoughts, dreams and nightmares. I am obviously not in a positive mood while writing.”

What is Nagrinn´s category for the Black Metal style of Misteltein?

„Other people has called it Symphonic Black- or Melodic Black Metal etc. But I see no point in these statements. We simply play aggressive and Satanic Metal. We play Black Metal.”

Nagrinn owns the matching attitude to his music - mainly he thinks `Satanic`:

„Yes I am very interested in such matters. I believe Satanism is the very essence of Black Metal. Though I think the word Satanism has become used in wrong purposes sometimes. There are too many incompetent people and I am tired discussing this. I am interested in my own matters though instead of waste my time on those apes. I can´t consider myself having a positive view of this world though there are many dark, morbid and depraved ingredients that I am fascinated by and that I live for. I believe Christianity has through history laid one of the biggest obstacle for the way of life I prefer. Although I find it amusing to see them feeling mocked.” 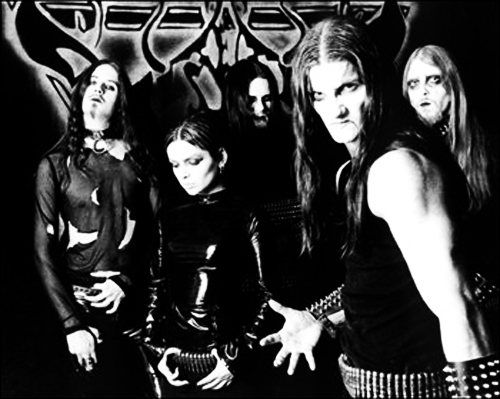 Furthermore Nagrinn is so kind and comments all the songs on „Divine.Desecrate.Complete” with his own words!

The guitar-wizard believes absolutely in what he does.

„I don´t think Metal has lost ground and I don´t care either cause there are always people interested in Black Metal. Perhaps it was bigger at some occasions but such things come in periods like in all Metal genres. Black Metal has always been underground for me and where is the ground to lose then? I still believe that Emperor is the greatest Black Metal band this far. Then there are many other great bands such as Dark Funeral, Marduk, Funeral Mist and many more.”

Regarding live-gigs - when folks will see Misteltein on German grounds raging?

„We will go on our tour Oct - Nov 2001. The dates for Germany: 22.10. Essen, Zeche Carl; 23.10. Tuttlingen / Alte Feuerwehr; 24.10. Hamburg / Marx; 25.10. Berlin / Knaack; 27.10. Engelsdorf / Hellraiser; 28.10. Offenbach / Hafenbahn. Right now the tour is ahead and after that we´ll eventually get new stuff together. Perhaps more gigs, time will tell. Besides Misteltein I will finish my studies and work with my other band, Defiler. I am pretty much busy all the time now. It´s a lot stuff going in the nearest future. We have to take things as they come.”

The hopes of the guitarist in „Divine.Desecrate.Complete” are high.

„I am really satisfied with the album and I am sure our fans and probably more people will be also. It´s a good development and all the depraved ones out there will not be disappointed. I hope this album will be better promoted and spread out the world then our last album though.”