These Danish guys are currently at the start with their second studio album „Fresh Kill Daily”, five years after the release of their debut album „Hands Down“.

Mevãdio plays a very aggressive sort of Groove Thrash Metal, which reminds one at groups as Hatesphere, newer In Flames and Soilwork for example.

The five-piece from Aarhus around vocalist Kruger definitely delivers Danish dynamite – 10 crushing songs with immense power and a broad range of creative variety. I am speaking with guitarist Ivan. 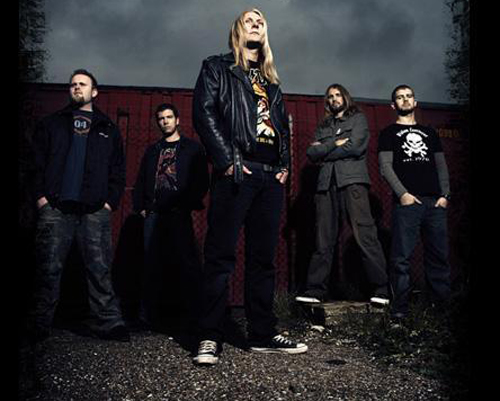 Hey Ivan, why should listeners buy your new album CD?

„Well, „Fresh Kill Daily“ has been in the making for quite a while, which has resulted in a consistent, diverse but at the same time coherent album, which is more focused and concentrated than our previous material. Compared to our debut album „Fresh Kill Daily“ is more Metal, the heavy stuff is heavier and the fast songs are faster. So, everything just seems to have been intensified during the long writing process. Still on our new album there are no trends, no bandwagon – it´s just Metal... Pure Mevãdio-Metal! And then the short version: It should be bought because it fucking rocks... go listen for yourself!”

„I don´t really spend too much time and energy comparing on that matter. We´re all really dedicated to our band and the music we create, and we love to share it with the fans either being on a record or playing live. But at the end of the day, you´re never better than your last record or last show, and the fans determains how far you´ll be able to push things. I guess you´ll just have to do your best to get notisted among other candidates, and we try to do our best in our own way...”

Tell about a time where you had to deal with conflicts in the music genre!

„Well, as mentioned before we´ve always been doing our own thing in Mevãdio. But as trends rise and fall – also within the Metal genre – it happens that really shitty band-wagon-bands are picked up by record labels for the reason of fast dollars. I agree everyone deserves a chance, but I think it’s a shame if the scene gets dominated by a lot of really similar sounding bands, that get all the media-attention from a lot of far more decent, interesting and long lasting Metal bands - but I guess that´s just how business works. So, doing your own thing in opposition to following trends is obviously not the easiest way to the top, and at weak times it can make bands choose a direction that is not heartfelt. We chose to hang in there, working hard for our own thing, which I think can be heard quite clearly on the album.”

What are your strengths as musicians?

„Some of the strength in Mevãdio is, that we write music as we please, not trying to fit within a certain genre. We´ve always strived for a sound that we first and foremost like ourselves combining solid Metal/Rock riffing with intense energy and melody. Hopefully we'll be able to surprise some people and offer an alternative here.”

Please give examples of ideas you've had or implemented for the music of Mevãdio!

„Well, we all bring something into our music from our lives outside Mevãdio and the music-industry. For an example our front man’s (Kruger) lyrics this time evolves around sacrifices, expressed in a wide range of forms: From the small compromises nessesary to make your everyday life with all it´s routines possible, to the slaying of your loved ones done just to achieve that moment of piece, we all need now and then. Implementing things like that in music I think offers you different perspectives on how life is...” 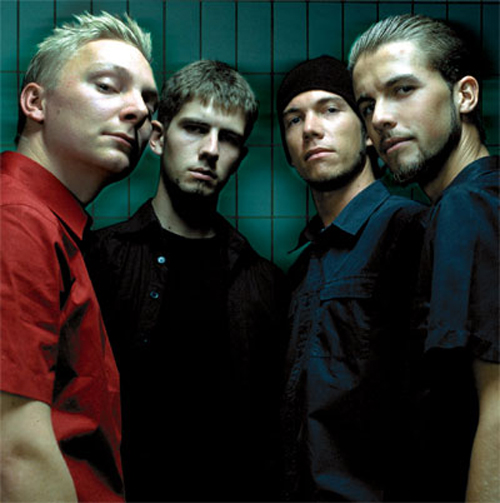 Report about your proudest achievements in your new music!

„Concerning our new album it has become extremely well achieved by the press but more important is the fact that our fans dig it! Hopefully the European and US release in may 2008 will be an eye-opener for even more Metal-fans out there.”

„I really don´t have a recipe for that... Sometimes wish I had, but then again – music comes in so many shapes and will hopefully continue to surprise you over and over again.... But ideal Mevãdio songs? Well, from our new album I still think „Abusers Manual” and „Ultimate Human Virtues” balance energy and melody in a really cool way...”

Who are your favourite bands and why? And who are your real heroes among them?

„We´ve all listened to Metal for a couple of decades now, so it´s hard to pin out one band from another.... But to mention a handful, old bands like Black Sabbath, AC/DC, 80s Thrash Metal like Metallica, Testament, Sepultura and later the likes of Pantera, Machine Head etc. has always been among our favourites.”

Btw: what are the qualities of a good band in your opinion?

„I just think it's important that everyone does their own thing. It keeps the scene diverse, alive and kicking.”

Why do you play especially this kind of music?

„Well, I think it´s been a natural development influenced by the fact, that we´ve be listening to and playing Metal for a couple of decades now... We try to do our own thing, even though you probably never can deny your influences.”

„Hopefully we´ll have a new album or two out by then. We have yet to play our first gig outside Denmark, which will happen this summer/autumn though. Hopefully within five years from now we´ll be touring a lot more. I really dig the combination of travelling while doing what you like the most... Playing Metal!”

What attracted you to your current record-label?

„Actually our debut album was released on Mighty Music / Drug(s) as well in 2003, but somewhat three years ago we parted ways, as they chose to lower their label-activity for a while. Then last year, Drug(s) returned and offered to release our new album, which we accepted, as it´s a totally different label these days. The people at Mighty Music / Drug(s) and our promotion company Target Distribution for that matter are a bunch of Metalheads. They seem to be driven by part business part love for the music. Especially Target is a valuable player in Danish music which we already benefit from.”

„I guess when you start a band, you never know where things are gonna end. Hopefully the writing process for the next album wont be as long as the previous, which was three freakin´ years due to other important things in life as work, studies, wifes, kids, etc. – and then of cause plain laziness. We´ll start writing new material this summer, but right now it´s too early to say anything about a certain direction.... It´ll be Metal though...”

When were you most satisfied in your band?

„There are certain moments that stand out during the years.... Playing Roskilde Festival in front of thousands of raised fists was pretty cool. So were support slots for the likes of Sepultura, Testament, Entombed, etc. At the end of the day I think the overall satisfaction is just to be around the guys in the band, playing the music that we like and having the opportunity to share it with others – especially live, where you get to kick some ass and say hello and cheers to the audience while sharing a Gammeldansk (Danish bitter).”

What kind of spiritual ways in life are you seeking?

„Not any really.... But I guess we all have our own life philosophies in some way or another... Listening to Slayer will always get you far!”