The edge of a new millennium brought the second full-length „Havets Vargar”, which marked at the same point the beginning of a long year co-operation with well known Belgian cover-artist Kris Verwimp. His talented hands were responsible also for the follow-up in 2003, entitled „Dödsfärd” and the one year later done re-release of „Vargaresa”.

Now the Swedes unchaining their latest effort, the new release „Vredens Tid”. A entertaining dialogue with guitarist Markus Andé brought me some information about the skilful Scandinavian four-piece. 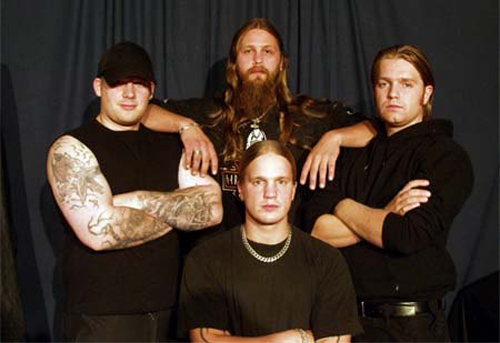 Hey Markus, how are do you doing at the moment?

„Hi! Well I´m fine. Just got back from Belgium. Were we headlined the “Clash Of The Titans” festival. So I´m pretty tired, but I will survive.“

Where exactly are you guys located? Please describe your hometown and area!

„We all live in Norrtälje, Sweden. Norrtälje is a rather small town on Swedish east coast, just six to seven miles north of Stockholm, the capital town of Sweden.“

Which was your first own bought album with Rock/Metal?

„I think it was “Too Fast For Love” LP with Mötley Crüe. I bought it from one of my neighbours who were like eight years older than me…“

„No fate, only the power of will! Believe in yourself! And Metal to the bone! He he…“

„I´m working as an electrician. Watching a good movie with my friends. Drinking beer.“ 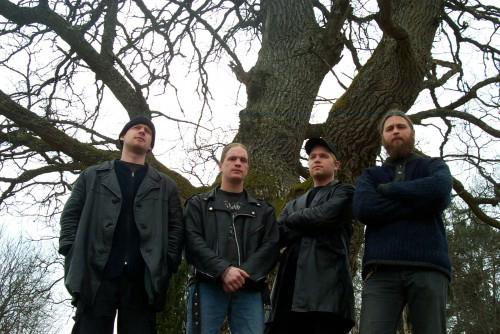 Are you satisfied so far with the work of Displeased Records for Månegarm?

„We have been working with Displeased Records for many years now. In some ways there’s hard to have a record label so far away, you always have to communicate via e-mail, but besides from that the cooperation has been ok.”

Please describe your development as musician – do you already begun to play guitar as a child?

„I think I started playing when I was twelve years. Since that time I have develop all the time and still is… No one expect Yngwie is complete as a guitarist.“

From where do Månegarm take the melodies and composing ideas?

„It’s Jonas and Erik that write songs for Månegarm. They are sometimes writing songs together and sometimes Jonas comes up with a guitar riff and than Erik writes the melodies for guitar or violin.“

In which mood do you feel the best creativeness? 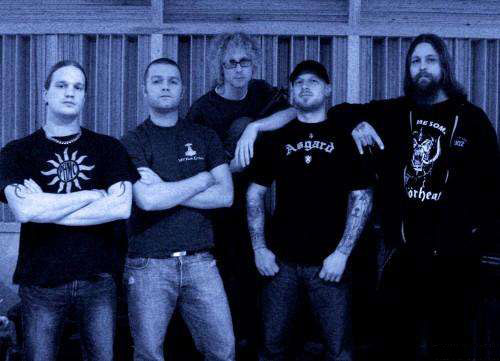 „We try to come up with songs that have got “it”. The songs shall contain a little bit of everything, so to speak. We try to put in some violins, some smashing guitar riff that sticks in your head, varied vocals (both male and female) and we try to write both hard parts and more harmonic ones just to get a good mix.”

The new album was produced by Pelle Säther at Studio Underground. By which means reached Pelle and Månegarm this overwhelming sound-result?

„Both Pelle and we had some ideas for what kind of sound we wanted. We worked a lot on finding the right guitar sound as the guitars are very characteristic for Månegarm. We also worked a lot on the drums to get the massive sound that we wanted. We recorded and mixed the album in only two weeks, which of course is way too short, so we had to work day and night to make it in time. We’re very satisfied with the result.“

„They are no guest musicians really. Janne Liljeqvist has played the violin with us since 1997 so we count him as a member of the band. Umer has been singing on every album except for the ”Dödsfärd” album.“

Please tell some influences – musical and lyrical – for the compositions of „Vredens Tid”!

„Musical influences are many... I personally can get influenced by all sorts of music, but “Metal” of all sorts is of course a big source to inspiration.” 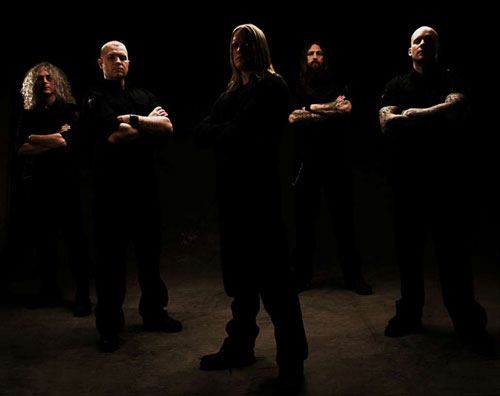 Please describe the readers the lyrical conception of the album!

„The lyrics capture stories from our heathen heritage. Some are based on true stories and some are more fiction so to speak... It would really take a while to explain the lyrical content of each song and it would probably also take away some of the excitement. I recommend everybody to read the lyrics just to find out for themselves. It’s in the eye of the beholder...“

Kris Verwimp told me about a giant troll, which sleeps in the forest all day. As the damned Christians begun to build a church, the ringing of the bell did awake the troll and his anger about these noise-pollution was big…

„Yes, that’s right and the result of their enyoing bells are shown on the artwork. The whole story is told in the song “Kolöga Trolltand”/”Charcoal-Eye Trolltooth”.“

The frontcover-art by Kris Verwimp - did you guys told him how to paint it? Or has he done the picture out of his own mind?

„It was Jonas and Pierre that first came up with the idea for the painting. We told Kris our ideas and he really liked them and started painting. He sometimes sent us some drawings and we gave him our opinions. The result is what you see, great!!! And if you read the lyrics of “Kolöga Trolltand”/”Charcoal-Eye Trolltooth” you will understand the background of the painting.“

How much a week do you guys rehearse? 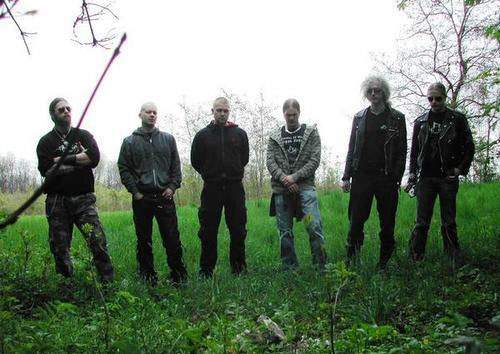 „I think I like all beers!! But one of my favourites must be Duvel since we drank a lot of it in Belgium recently!“

Please tell us your favourite bands, to which you listen to!

„I mostly listen to old school heavy metal like Mötley Crüe, Iron Maiden, Judas Priest. But also newer bands like Therion, Satyricon and Behemoth. But my favourite must be Eddie Meduza, a Swedish artist.”

When we will get the next album of Månegarm? And in which direction your music will go?

„We are writing some new songs for our next album and if everything goes as planned we will record it in the summer/autumn of 2006. Maybe it will be out in early 2007? The new songs will be great I think. Some are more fast and “thrashy”, like on “Havets Vargar”, and some are more like “Dödsfärd”/”Vredens Tid”.“

„We have played in Scotland, Germany, Austria and in Belgium on different “Metal-fests” and festivals. It has been really funny and the gigs have been really good I think. And of course many gigs in Sweden!“

„We have of course a goal/dream of doing this fulltime, but it’s a long way there. It would be really great to have music as our daily work!”