To celebrate this most welcome Italian exceptional talent as a revelation in terms of Melodic Pagan Folk Black Metal, is certainly not an understatement.

For if ever a formation of this genre guild could reach the ice-cold water to the forever commanding reverence bandname Windir - albeit only partially, anyway -, then it is undoubtedly Malnàtt.

Apart from these fact that they are working with an accordion, too. The septet, foregoing with downright overwhelming epic atmospheres, came together in 1999 and shows on his fascinating debut album „Carmina Pagana“ a high musical maturity.

Lyrically and conceptually the seven-member Horde pays tribute to the delicious pork specialties of their picturesque home, where fat bristle critters are fried since 2000 years. 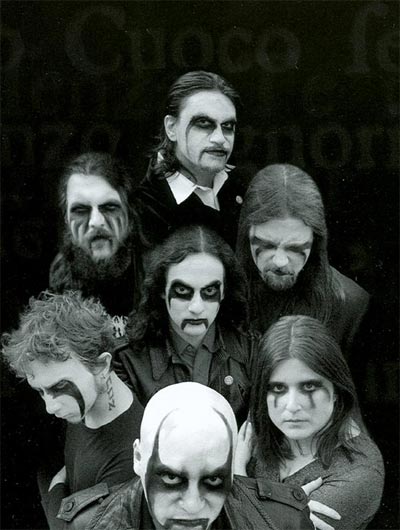 Chief lyricist Porz, a smokey bandit with very weird humor, is also responsible for arch-grim vocalizations and percussion within these exceptionally talented bunch.

Hey Porz, how are you doing?

„Hi, in these days we are just working on new songs for the next CD: we’ll try to make a concept-album, with musical and lyrical leit-motivs based upon the recalling of the ancient past times and to make a laughing-stock on it! On the end of summer we’ll start the live-promotion of „Carmina Pagana”, but is more difficult to organize live-shows without the help of a booking agency...”

„We like to name our music “Necro Swine Black Metal”: extreme music, black metal image, and lyrics based upon anti-politic, goliardic and depressive themes... It is possible to call our band “Pagan black metal” but you must intend the word “Pagan” with his original meaning of epicurean and earthly philosophy.”

Are there any bands or classical composers as influences for the new songs of Malnàtt to mention?

„Is more difficult to influence our sound, because every Malnátt’s member like kind of music and bands completely different to other Malnátt’s members... I don’t understand how we can compose the songs... Malnàtt is a very kitsch meltin’ pot.”

„We make a bow of reverence to Satyricon, Ulver, Darkthrone, Taake, Finntroll, Opeth and Turbonegro. (I’m the president of the Turbojugend-Bologna).”

For my taste is your new album an outstanding piece of Melodic Folk Black Metal out of Italy. Sometimes it is nearly comparable to the Norwegian elite band Windir. How far you agree ?

„Thank you very much. Windir was a great band, and it modern incarnation, named Vreid, is a good heir. Is an honour for us to be compared to Windir, but that band has never inspired Malnàtt in music-composition.”

In what qualitative position between nowadays Melodic Black Metal acts do you see Malnátt?

„I see Malnàtt as an island.”

Where was the new release „Carmina Pagana“ produced?

„It was recorded and engineered in Fear Studio, one of the most famous studios in Italy: Inside Fear studio – there is a team of nice and competent guys! Other great Italian bands, which did record their works in Fear Studio, are: Ephel Duath, Handful Of Hate and Dark Lunacy.”

„It was a very nice experience: coldness, dampness, enraged girlfriends, and above all the Piadina Romagnola with sausage, mayonnaise and onions.” 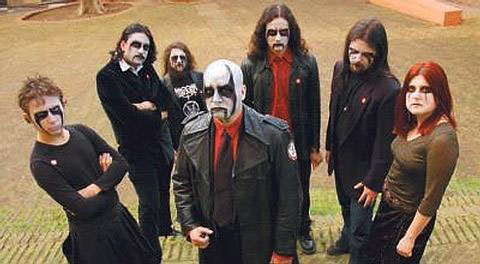 How long took the time for the complete songwriting of the new album?

„3 years. Yes, 3 years because we have changed many line-up components and because some songs are older than the songs on „Necro Swine Black Metal” split album. „Carmina Pagana” is a patchwork. Next albums will be less heterogeneous than „Carmina Pagana”!”

Who out of the band did compose all these touching melodies?

„Lerz (guitar) and Giaz (keyboard) are two great composers. Lerz is devoted to Norwegian black metal and (but) he got a very good musical-taste. Giaz is devoted to progressive and epic metal and got an absolute-ear for melodies.”

„Ah ah, is an italian play-on-words! We want to combine two influences: the holy/secular transgression of the „Carmina Burana” with the original means of Pagan (explained on a previous question).”

Please bring the lyrics of the new songs a bit closer!

01. „La guêra di inbezéll” (the nitwits war) - The song start epic, become depressive, than finish cynic. A song against war, see on fourth person (We)
02. „Al Barabén” (the Barabén) - A traditional lyrics of our land. A metaphor of Carnival: the death and the rebirth of a symbolic man.
03. „Lorda nera” (filthy black) - All commonplaces of black metal standard songs becomes a joke in our hands!
04. „Misantronoia” (misanthropicboredom) - An old song with a standard black metal themes, free-evil but poetic!
05. „Santo Masochismo” (holy masochism) - A song against drugs and religions. (Are two different things?)
06. „Nòt trancuélla” (quiet night) - A “Saturday night sabbath” in honour of Pan
07. „Bulåggna” (Bulåggna) - A song dedicated to our city (Bologna) see through metaphoric and poetic visions.
08. „Siamo Galli” (we are celts) - A song about ancient history of Bologna and its foundation.
09. „La guêra d'inción” (nobody’s war) - Another song against war, see on first person (I) 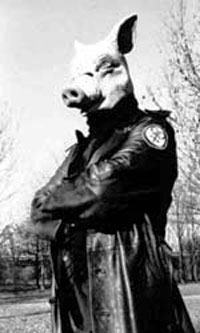 The pork conception is simply a kind of territorial-marketing techniques to promote and support the economy of our land, based by two thousand years on the breeding of pigs. We see the world through the eyes of the Pork because it’s an alternative point of view, better than the Goat-eye... the pig got an orgasm of 30 minutes!”

Your own expectations for the new album?

„No expectations, we are depressed, and we want to kill-ourselves. The new album is a palliative.”

Where do you see Malnátt in 10 years?

„Dead. Dead and buried. It is impossible for me think 10 years, I’ve a life-expectation of 8 minutes!”

In which country do you have your most dedicated fans?

„Obviously in Italy. We have made a very very good live show in Prague on 2002: great participation! Oh our first German fan... You are welcome!”

In which specific direction the music of Malnátt will go?

„The next album probably will be similar to „Carmina Pagana” but the songs will be more homogeneous and a bit more “black”: we like folk-melodies but we also like the cold sounds of the northern BM tradition! In a far-away future I see more instrumental songs, minimal and rough sounds, more experimentations, schizophrenic solos, and a pinch of electronic and noise...”

Please inform us about upcoming concerts!

„No live-shows scheduled. Few places. Lot of bands. Lot of false booking agencies. Our live-shows are more better than our albums! You think „Carmina Pagana” is a good CD? Yes is true, but after a Malnàtt’s concert your life will never be the same... We are truly crazy on stage, and I do an hard cabaret-entertainment, but only in Italian tongue for the present.”

Some specific plans for the future?

„We want to be rich and famous. You think we must robber banks and burn churches? Mmm... I can assassinate a gay in a pub... The path of Black Metal is an impervious path. Like a grey Bilskirnir full of iron-thorns and soaps. Thank you very much for the interview.”