The latter plays the quintet with a penchant for gloomy sounding tragedy on its current, self-titled debut album also fully out. The French Malmonde formed their band in 1999, first in the trio formation.

I put myself into the mind of bass player Michael Coracin and guitarist, singer and electronics manager Ludovic Giroud. 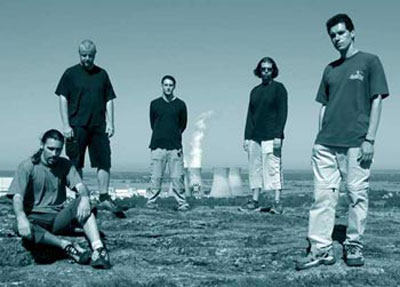 When was the band formed and how the whole thing has developed in recent years?

Ludovic: „Malmonde was founded in 1999 through Hervé (guitar) and me, Ludovic, (vocal/guitar/programming), and we started to play kind of a Gothic Metal. Michael (bass) joined us a few months later. Malmonde quickly moved to a more aggressive style, between Thrash and Death mixing electro sequences. After having developed our sound with a hammering drum box during the first 3 years, we decided to integrate a drummer keeping in mind how it has to sound. Christophe, coming from the band Fairlight, is the good one!”

What does your bandname mean?

Ludovic: „It’s rather difficult to give a right translation in English because the word "Malmonde" doesn’t exist. It is a combination of 2 words : MAL (Evil) and MONDE (World)”

How is the feeling within the band in these days?

Ludovic: „We feel good! How to feel otherwise while we’ve just signed a deal with a famous French label! We are very motivated and we are already working on the next album. And we really enjoy playing the new songs! Apart from that, we are impatient to see how our first album will be welcomed!”

Please describe yourself with a few words as persons!

Ludovic: „Well... difficult to describe our personality. But generally, we like to make party and laugh. You know, life is too cross to spend it to lament! There is a great feeling within the band because we are above all friends before Malmonde!”

What is the definite goal with your music?

Michael: „We hope to propose something mixing several styles of music (Metal, Electro, Industrial) in a different way that what has already be done. Our music foundation is definitely aggressive Metal and we would like to open listener's mind (if necessary of course) to something that's not "pure true metal"! And even in the "Metal family", there are a lot of separate groups (Nu Metal, Black Metal, etc ...) that we would like to see together during our gigs!”

Which visions should see the listeners while listen to your music?

Michael: „We are more directed to the future than to the past, so if the listener has to have imaginative visions while listening to our music, it should me more about how he sees the future, the relation between human and machines for example. It's definitely not how things happened but more how they will happen.” 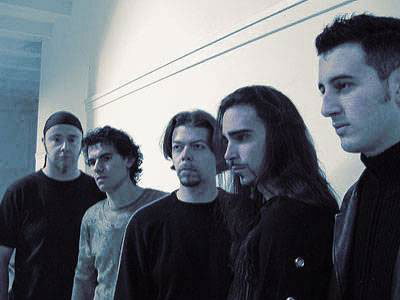 Exists a concept behind the new album?

Ludovic: „No, behind this first album there is no concept... On the other hand for the 2nd album (2004) we are working our lyrics as a concept but for the moment we shall not speak about it more.”

Which were and still are the inspirations for the music of Malmonde?

Michael: „Difficult to say, never thought about it. Probably everything we hear could be a source of inspiration, but nothing in particular. We generally start to work on the music and depending how it sounds, its gives some idea on the lyrics and then we work on it. Generally, lyrics come from internal feelings, a lot of metaphors are used. We don't speak about what is going on in the world or a least not directly.”

Which were your early idols out of the music scene?

Ludovic: „In fact as we have such influences it is difficult to speak about idols. We like Rammstein, Dimmu Borgir, Samael, Fear Factory, Pain, Hypocrisy, Pantera, Dark Tranquillity, Soilwork, Slipknot, Korn, Paradise Lost and more!”

Which ones have influenced your playing more or lesser?

Ludovic: „Perhaps Rammstein or Fear Factory are more influent than Korn, but it's difficult to say because we "draw" our music through different way, not necessarily Metal because we like also Rock, Electro, Poprock or Triphop.”

You are the first band on Osmose Productions, which delivers such an avantgardistic Metal style. What do you think about it?

Ludovic: „First of all, we were so surprised because we were persuaded that Osmose would never be interested in Malmonde! Now we are really enjoyed of it because it's a famous label and this is a major step for us. We are very confident in their work for us.”

Michael: „As I already told, our music foundation is aggressive/extreme Metal, vocals are mostly guttural, our style is oftenly described as Electro Death, and I think that what Osmose likes is how we managed to include something new in this kind of music... maybe they also want to have more diversity in their catalogue.”

Main plans for the nearer future?

Ludovic: „We're preparing a second album (concept) and hope we'll soon have more and more gigs. This is important to really see how people react on the music and it's also a major way of promoting it!”