Madrigal was founded in 1998 in Gothenburg, Sweden. They were teenagers back in those days and played in different local bands.

They started rehearsing and a year later they won a new bands competition. The first prize was to enter a studio and record a demo. The demo was sent out to mp3.com and it was very successful. Madrigal were number 3 in the Gothic chart ahead of bands like Lacuna Coil and Moonspell.

The band is: Martin Karlsson (voc./guit.), Kristoffer Sundberg (guit.), Lida Emanuelsson (keys) and Marcus Bergman (dr.). In early 2000 Madrigal had the chance to open up a show for In Flames in Gothenburg. They received a great response and In Flames singer Anders Fridén was very impressed with the band.

Fridén invited them to the Studio Fredman (which he owns) to record their debut album „I Die, You Soar“. Anders played the demos to the A&R men from the In Flames record company. Nuclear Blast were impressed as well by the old fashioned, but great and very refreshing Gothic Metal of the band. The deal was completed. 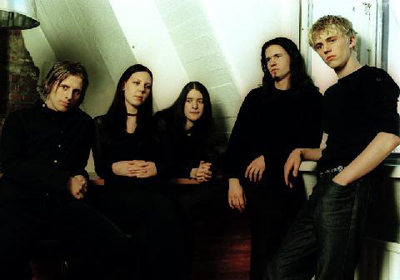 The questions are answered by the whole group in collaboration.

„Recently we got a new bass player and this is the first change to our line-up since we started playing together. We now feel that the line-up is constant and we’re delighted with the current band situation.”

They are very curiously about the results from fans and press after the release of the album.

„Of course we are! But we feel that this is a great record and that is the most important thing to us. Still, we really hope that many different people will appreciate the album. To us it means a lot if people with various musical backgrounds can appreciate the album. It’s never fun to get a bad review if you have worked hard for something, but it won’t change the way we feel for the record. On the other hand a good review is something you really should treasure.”

What is the meaning of the band‘s name Madrigal?

„The name is a musical term from the middle ages, a Madrigal involves a lot of harmonies. We felt that that name could be applied to our music.”

About the history of the band, „I Die, You Soar” is the debut album.

„Yes, `I Die, You Soar` is our debut album. Before that, we recorded a couple of demos, amongst them one with Andy La Roque in Los Angered Recordings. We feel that for each demo we have improved our songwriting and musical abilities. They were all valuable lessons when it came to record the debut album.”

What is the main concept or theme within Madrigal – and what meaning does have the album title „I Die, You Soar“?

„The title basically means I die and you just fly away, hovering above, unhurt. And in our concept this take place in a relationship or more correctly in a dying one. But we don’t really have a lyrical theme throughout the record, even though all of the lyrics come from the same kind of feelings and moods.”

With Anders Fridén the band had a great time together in the Fredman Studios.

„We recorded it there with Anders. He had time over in the studio and although we didn’t have a record deal at the time, he offered to record our album with him. This resulted in 11 days of hard but pleasant work. After this we mixed it at the same studio with Fredrik Nordström for 4 days. Both Anders and Fredrik added their musical senses to the production. We are very happy with the result and they both did a great job.”

How long did it take to compose all the songs on „I Die, You Soar”?

„For about two years. During that time they have developed to their current form. When we found out that we should record the album we had about one month to complete it. That meant doing tw o new songs in one month, but as it turned out these are two of the better songs.”

Who composed most of the tracks for the new release?

„On this album the main composers for the music are, Kristoffer, Linda and Marcus. For the most times that process starts with anyone of us having a few riffs and/or ideas. And maybe somebody else got something that fits into that vision. Then we all arrange it in our rehearsal room. We’ve been really slow at writing songs this far, but now we got a lot of new ideas. And things that inspires us can be a lot of different things. Good music, of course and things that challenges your mind, for example a really great book. We know it’s a cliché, but we think all of us write more music and lyrics when we’re down and depressed. Writing music and being creative is a good way for all people to help you curb any depressions in your life.”

Who wrote all the lyrics?

„Martin writes the main part of the lyrics. The lyrics often refer to human relations in different shapes and forms. That is a subject that is constant and gives a lot of inspiration both to lyrics and music. Lets just say that it’s hard to write good lyrics in a happy mood.”

What is the band‘s own description for the music style of Madrigal?

„That’s a really hard question, but we would describe us as a Metal band with influences from gothic, symphonic and progressive music. We all listen to a lot of bands outside the Metal scene and we feel that this is a good way to develop our music. If you only listen to the music that you play, it will be difficult to develop your songwriting in new and interesting ways.”

These Swedes are not interested in Satanism and Occultism at all.

„This has nothing to do with Madrigal. We don’t write dismal melodies and lyrics just for the sake of it. And just because you play this kind of music you don’t always have to walk around in a bad and depressive mood. At times there can be a kind of comfort in just letting everything fall down on you and nourish (accept) your darker sides. And you learn a lot about yourself doing so. But "worshipping" the dark seems a little bit absurd actually. However, as long as people do something they want and really believe in it, that’s fine. Just don’t force you’re ideas onto other people. Everybody should make up they’re own minds about what will work for them and make them stronger.”

The band is so kind and explain the background of the new songs.

„`Same Face` is the most recent song on the album. This song has a little bit of everything and it represents the style of Madrigal pretty well. It has a catchy chorus, a more thoughtful vers and a symphonic intro; `Languish` is a more innovative song. We like to explore odd harmonies without losing the appeal of good melodies. It also features a soft piano peace backed up by heavy guitars which is quite quintessential for the Madrigal sound. We’re really into dynamics in music; `Taint Of Shame` is the most up tempo song on the record. It’s also the most straight ahead song. This is the only song that features Martin’s Death Metal vox, something that we might explore further on our next album; `Mind In Disguise` is a more calm and beautiful song; `In Debris` is typical in that way that it features both heavy and soft parts. It also has a slight ‘70s feel, complete with Hammond organ; `Ashen Eyes` is also one of the newer songs on the album. It features some strange beats, try to headbang to this!; `Enticed`. The oldest (and the longest) song on the album. Here Lucas gets room for his bass playing abilities. It’s also the only song to feature acoustic guitar; `Moulded Pain`. This song features guest vocals by Tobias Martinsson from The Provenance. It’s also one of the darkest songs on the album.”

Some words from Madrigal, concerning the nowadays Metal scene:

„Who will say that Metal music was losing ground? The scene is bigger than ever and it’s growing still. If you’re thinking about Metal bands adding new styles to their music we think that it is a good way to bring the Metal music to new levels. The worst thing that could happen is that the scene would stagnate. Although, it’s sad to see all the bands that develop only for mass consumption and for the only sake of money! (read: all the shitty so called Metal-bands being hyped on MTV. But in the end … everyone should do what they want and don’t give a fuck about everyone else opinion. The band Opeth is one of the best and most interesting bands around. Soilwork is another great band. There is also a new band from Gothenburg called The Provenance (where you can hear more of Tobias Martinsson, the guest vocalist from Moulded Pain), who will release their debut album soon.”

Live concerts - when we will see Madrigal on German ground playing?

„As soon as possible! We’re really looking forward to touring. On stage the music will be in focus. No certain stage clothes or things like that will be used. Our stage act is still quite unexplored.”

„We will continue writing songs and develop as musicians. Also we’re looking forward to playing live. Hopefully the album will get a warm reception and we’ll be able to continue doing what we like best, playing music.”

Primary hopes for the new album?

„We hope people can sense some of the feelings that we had when we wrote and recorded the songs.”