The world changes permanently. Also the likewise manic querulous-minded as well as highly sarcastic Frenchmen Adrastis is issued in this point differently – what one listens clearly very especially this time the new studio album of his Black Metal band Love Lies Bleeding.

For this fifth long player by the name of „Clinamen“ reveals more creative avantgarde, as it was at the good known self-willed love blood drinkers and confessing stages opponents ever before the artistic case. Noticeably sounding modern influences found likewise entrance into the new grim- and anger-songs as various electronic sounds stood as inspiring godfathers.

Of its former so lovely dark romantic and endlessly longing theatralic creations Love Lies Bleeding have far removed itself therefore meanwhile. Industrially sounding icy coldness and superficial introverted death-wished dominate the manic schizophrenic appearing sound events on „Clinamen“ – at the same time musically and emotional naturally nevertheless highly intensively as well as before and ever. 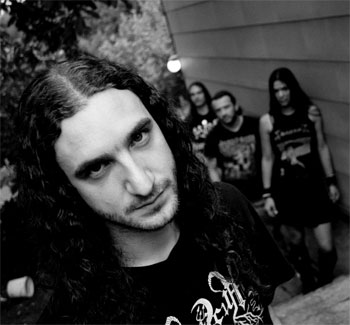 Hey Adrastis, what is to tell over the band-chemistry of the involved ones ?

„In fact, there is no real chemistry in the band. We are all close friends but their individualities doesn't have a link with what Love Lies Bleeding is, was and will be. Love Lies Bleeding is the reflexion of what lays inside me. That's why everything is about my ego. But not directly as an human being, but after the "prisma" effect of art. So, yes the others are silhouette, 'cause regarding to Love Lies Bleeding, they are not into process of creation, except Em-x who writes lyrics. Others play in various bands, well known in the Black Metal scene. They are here as session musicians and friends. It's not a secret, but I don't know if they want that to be known.“

Which are the main differences on the new one to the previous album?

„`Ellipse` was a transition I guess. First 3 albums were really into symphonic Black Metal. The previous album was a link between my past work and what I do, now. So, the album is deeper, with industrial, eletronic influences, but with a real metal sound. Almost old schoool for the guitars and drum sound. I achieve something, I know it, I feel. I don't know if Love Lies Bleeding will go one after this. For the first time, I know that I'm on the right path.“

Have you been very busy lately with the work on the new album?

„I compose this album in 2 years. So yes, it took times ! Thinking about it everyday until recording, in June. Now it's behind me and I'm very proud of it.“

At the time, which topics inspired and/or motivated you for the new album?

„`Clinamen` is an epicurian concept that I particulary like. It says that the main dynamic in universe is an oblic movement that create possibility of congregation of atoms. Without this movement, nothing could exist. Just falling atoms in an infinite void. So basically, life is just this hazardous meeting between things that congregate or not. It can be people, melodies... But nothing has a transcendental sense. Just pieces of matter that works togather or not. This black hole, in the center of the artwork could be taken as the aera where nothing works. A total black hole where creation didn´t work. All parts that surround this hole are this life, this creation that have been made possible.”

What to you is most inspiring in nature?

„Forest? Birds? Not at all. Don't care about nature. If I was interested in nature, I would never have composed one single note... We create because we feel that something is missing. So nature is not enough for me. I'm more interested in human nature.“

„My way of composing is a true mystery, even for me. Things comes up from my innerself and fall into reality as music. I'm just the place of this "magic" congregation. And I keep what I feel. What speaks to me. Sometimes it's a riff, sometimes it's just a sound, or a rythm. I need to be "agree" with things that go through me. If I agree, I keep.“ 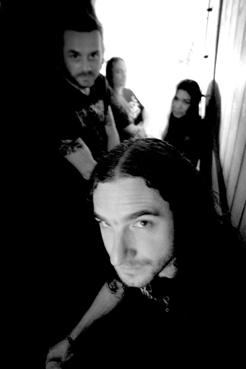 Please tell about the lyrical content of the new album!

„It's my more philosophical album, I think. I wrote things about Kairos, for exemple: Kairos is also a concept from ancient greek. It comes from Hypocratic medecin. It's the good moment to give the cure. Before it's too early, and after it's too late. I really like these scientific concepts you can apply to your own existence. Feu Follet is the name of a book by Drieu Larochelle about suicide. It's a story of an ex dandy, ex alcoholic who tries to find a reason to go on with life. So he visites all his old friends to see what is life for them. For some it's family, for others, it's art, drugs... At the end, he really doesn't find something that speak to himself. So he kills himself, saying "I die by my own hands because all things are unreachable. I cannot touch. When I touch things, I feel nothing". There is this feeling on this song, very pessimistic. What happens when you really find no reason to stay? Everyone has sometimes this feeling of decadence... Nothing has sense etc. When I was 17, it was just unacceptable. Now, I find it very interesting. As there is nothing, everything has to be created. Sense itself has to be created. And that's why Life worth it. Because it's a complete void we have to fill.“

How do you feel about Christianity? Many in Black Metal write anti-Christian music but never take it past that. Do you still live and breathe Black Metal?

„The topic is not interesting. I live my life by my own. Don't care about religions. Some need them, others not. It's not my priority to fight this kind of thing.”

„Maybe a sect. And I will be the gourou. Rael rules!“

„Absolutely not. There is no sense at all here. Just a chaos of life, formed by the clinamen. Starting of religions is to belief in a transcendantal meaning in the universe. But that is just a thought that make you live your life without questions... Accepting chaos and lack of sense is to accept the fear, the absolut fear of being nothing. After this moment of pure fear, things become clear, and you reverse emptiness that your are. If I'm nothing, I can be anything. And this anguish becomes a strength.“

Black Metal is much different than it was in 1993. When do you think the changes occurred, what were they, and why did they?

„I'd say around 1995-1996 with the first super-productions in Black Metal, like Cradle Of Filth´s `Dusk And Her Embrace`. Money started to be in the aera. It began to be possible to live with Black Metal. I'm not against changes in the "scene". We have just to deal with it.“

Where do you see Black Metal in 5 years? 10 years? What part do you see yourself playing?

„What Black Metal will be? Really don't know. Hard question. But as all musics, there will be some fast and low periods. I believe it can really begins to be a real genre, and not just teenagers who to pissed of their parents... I think I'll still be in the aera.“

Do you have any spiritual beliefs, or strong ideological ideals?

„Just believe in myself and the close friends that feel the same way. I'm not here to change the world, but to deal with it. It is what it is. What can I do with that? What can we do? Create our links, our connections. To stay strong, together. And we don't need so many people. Just read Hakim Bay, Cioran or Nietzsche.”

Have you played any concerts meanwhile?