French Black Metal poets Love Lies Bleeding releasing their sensational third album, entitled „Ex Nihilo”. It contains again monumental and orchestral Black Metal, which creates an overwhelming and timeless aura of pure evilness. Simply a must for all true and devoted fans of symphonic and artful made Black Metal.

Love Lies Bleeding main composer Adrastis presents itself again in a very strong form. And since the very successful second album „S.I.N.” the dark philosopher was lyrically not even uninspired. Love Lies Bleeding gave birth to an new intense level of extreme dark and nihilistic music. 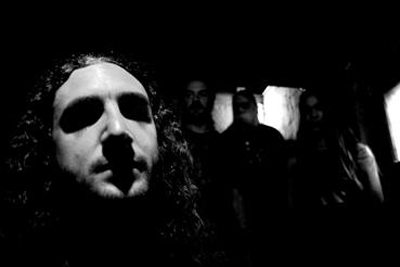 Which are in your opinion the biggest musical differences between the new album „Ex Nihilo” and the last superior album „S.I.N.”?

„It's interesting because you're the first guy to tell me that the previous opus is superior. Musically, `Ex Nihilo` is in the same movement that S.I.N. But songs are much more violent and orchestral. I worked a lot on the structure with this one. There are a lot of changes: tempos, atmospheres, sometimes I use old school Black Metal riffs (like Darkthrone and Satyricon...), sometimes I am inspired by Brahms or Grieg... But everything work together. The structure is very important for me: it's not just a congregation of different ideas. Every parts has to be in its ideal place. To be even more deep in what I wanted to express, I asked a male opera singer to join us. On the album, I worked with this mixture: Black Metal vocals, female vocals and male vocals. I used all possible combinations. Sometimes, there is 6 different vocals parts at the same time. It was very important to me to work this orchestral and symphonic aspect: all the arrangement are composed like a real symphony.”

Are there lyrical differences to „S.I.N.”?

„Lyrically, `S.I.N.` and `Ex Nihilo` are linked. `Behold My Vain Sacrifice` is something else that I don't want to create anymore. You can see similarities between my two last albums: I try to express positive nihilism. You have to destroy everything before create your own being. `S.I.N.` was the age of destruction, there is nothing but myself. God is dead, reality no long exists, truth is total lie. `Ex Nihilo` is the age of reconstruction. It's an anthem to art, this power given to men to overcome themselves, to become gods instead of the emptiness of `God` (in a religious way). We are able to give birth to infinite creature, beyond ourselves. The song `Ex` is about this: we have to be outside of our simple condition of man. We have to become creators to create ourselves after all.”

What happened in the bandcamp in the past year?

„Nothing special. I just composed `Ex Nihilo` and created a `gathering` with other individualities to record it.”

„No gig. Maybe one day, but I would like to do something special... I don't want to do a regular gig.”

Which were the main influences for the songwriting of „Ex Nihilo”?

„I would say nothing, but it wouldn't be true. I can't tell you what precisely but I truly believe that I am not really the composer of this opus. I am just a slave of my muse. Every creator feels the same. The creative strength doesn't belong to you. If the power doesn't come to your consciousness, it's simply impossible to create something. So my muse is life. Not the pathetic nowadays life, but the almighty energy of all things. Life has to be the supreme valour, as Nietzsche said. This is my main influence. It's not a religious belief or something, it's not even metaphysical. I don't speak about a god. Life is just the key of all mysteries and we have to seek it. This pure force is everywhere and this is in music and in pain that we can feel it in the easiest way. The great Friedrich said: `There is no difference between tears and music.` I can feel this truth every time a melody comes to my mind.”

Which influences have touched your mind during the songwriting process for „Ex Nihilo”?

„A thing is sure: if I was influenced by my musical environment, I would compose just pure Black Metal, without keyboards. Here, in France, if you want to be a `true evil one of Satan in the darkness of hell` you have to piss on all keyboards stuff and worship nothing since 1991...”

Please tell about the current line-up! Changes to mention?

„Ereshkigal wasn't able to work with us this year because of lack of time, so I recorded Bass parts myself. Nikki joined Love Lies Bleeding as opera male singer. Here is the actual line-up: me, Adrastis: Guitars, keyboards and bass, Emrys: Black Metal-vocals, Hydraoth: drums, Jeanne: female vocals and Nikki: male vocals. Olivier, the singer of the French band Eros Necropsique came on one track, `Acedia`, as a guest star. He is a very good friend of mine and we know each other since several years. When I composed the part in `Acedia`, I already knew that I wanted that he speeks on it. The recording was very weird because Olivier didn't do what he planed. He almost became mad, more hysterical than ever, and scream something very special. So, it's not just an Eros Necropsique part mixed with Love Lies Bleedings style. It's a real osmosis between us.” 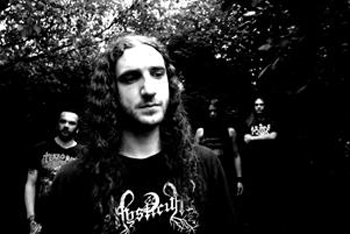 Have you as a band for the new album worked well together in the recordings?

„The only time that we are together is in the studio. So it has to work well. There is no time to fight each other so everyone forget who he is to focus on what he has to do. But there is no rehearsal, so we never play as the same time. The only gathering is in the record.”

Was the new album recorded again in Linz?

„As usual, we recorded in CCP studio, in Linz. It's one of the best studios in Austria. It's a great thing to have the opportunity to record without delay. Claus, CCP´s producer, is also the sound engineer and he knows perfectly his job. We all know what we want and we have all time needed to do it. It's not like working with a stranger who doesn't care about what your band has to sound. Claus knows Love Lies Bleeding for years, so there is no problem with him.”

What is to see on the frontcover on the new album?

What is the meaning of the picture?

„There is no dogmatic senses on my covers. This is the same for this one. First of all, I want to express feelings before meanings. With the cover of `Ex Nihilo`, I wanted to give an impression of organised chaos cause that's what creation is. Something is coming. This is the birth of something that we don't know anything about. It's a kind of `ante persistance`, that I talk about in `S.I.N.` Something is near, but its sense has not been revealed. So this is just pure essence of creation.”

Does the picture stand in relation to one of the new songs?

„The song `Ex` is directly related to the front cover. It's a 15 minutes song with an oppressive melody that comes back several times in different ways during all songs. At the beginning, it's not so clear. We don't know where we are falling or rising. Afterward we start to understand: there are several paths. As much as we want: the melody is played with many instruments, sometimes softly, sometimes hardly. It's impossible to identify which way is the best because, as musical strength, it's in perpetual motion. So `Ex` is an Ode to creation and to music in particular. Just as the cover.”

What does the title „Ex Nihilo” mean?

„First of all, it's the definition of Art: out of nowhere. Every artist reproduces the first act of God: creation. But to create, you have to destroy. You have to deny everything to build your own art, your own vision, your own language. It's not just an artistic view, it's also a morale subject. You have to reject all to know what you are. It's a positive nihilism. Destroy everything to begin a new age. The age of the `I`. If I don't consider myself as God, I can't know exactly what I am, what `I` is. So, all individualities has to be create `Ex Nihilo`. There is no father, there is no past, no future, just a pure present. Just like music: every instants of a song are pure instants of present. But not a motionless time: an endless movement. `Ex Nihilo` is for me this magical moment: When there is just a present, a birth of present. There is no more fear, no more pain. Everything is totally new. Music is voice of life, cause life never dies, never drown. We have to understand it and lead our own existence in that way. Create ourselves every second, create our owns ways. This is the reason why I reject all transcendental position. There is no God. There is just me. There is just `I`.”

How runs it with the success so far for Love Lies Bleeding?

„I really don't care. I just know that I have more support in eastern Europe than in France. In my country, except Dimmu Borgir or Cradle Of Filth, Black Metal bands with keyboards are not followed... To be `true`, you have to listen to extreme stuff, with no compromise, with no feelings. There are some true supporters of Love Lies Bleeding, but they are not so many cause I don't create music that fit with the nowadays fashion. But honestly, I don't create my music in order to give it to the world. It's first of all for myself. For me, a record deal is not a way to become famous or something like that, but an opportunity to record what you feel with good conditions. Like everyone, I need this little moment of eternity. A record is made for this. I live beyond my existence cause my voice will never die. I know it's an illusion. Death is certain and even if someone still listen to my stuff after my end, I won't rise from my ashes.”

Which bands out of the genre Symphonic Black Metal do you prefer to listen in your free time?

„These days, I listen to some French bands like Arkhon Infaustus or Olc Sinnsir. I started to listen to tekkno hard core stuff. Sometimes it's much more dark or violent than a lot of Black Metal bands.”

Which bands would you mention for a more or lesser comparison for the unique sound of Love Lies Bleeding?

„I don't know. Some people talk about Emperors `Nightside Eclipse` period but with a different sound. But I would say, like all bands in the world: I have my own style, blah blah blah...”

Creative plans for the future?

„I already started to compose new songs. It's very early to know, but I will maybe explore new musical areas. Maybe with computers... Something like a post-Love Lies Bleeding...”