Demonic-slippery, the Finns around chief monster and scary preacher Mr. Lordi show themselves on their new album „Sexorcism“.

The wordplay in the title, which is typical of the formation, covers the content across its entire width. Once again, the former winners of the 2006 Eurovision Song Contest know how to ensure an eventful listening experience with their catchy-swinging mixture of Hard Rock and Melodic Heavy Metal.

Visionary, imaginative and original as ever, the still fantastically costumed horror quintet leads the fans directly into a unique fantasy world. As bassist Mr. Ox, who has been involved with the spiky-armed bunch since 2005, reports with rough sounding words, „Sexorcism“ became exactly what he had in mind.

What can you report mainly about the global feedback for the previous, for Lord a bit unusual album „Monstereophonic (Theaterror vs. Demonarchy)“? 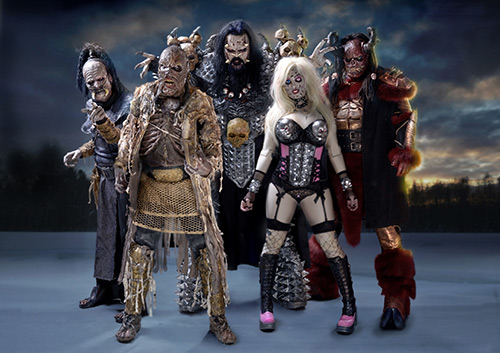 „I felt that we got a lot of very good reviews and that the fans liked that album a lot. Especially the ‚Demonarchy‘-side which was a bit experimental for us. That feels really good.“

„Sexorcism“ - how do you feel now, after having finished these new, typically Lordi, controversial thrilling collection of songs finally?

„Feels really good. In my opinion the album turned out just like it should. It sounds really good and the songs kick ass too. Also like the theme of the album a lot. My favourite Lordi album so far!“

If you want, please be so kind and describe your development since your start in the band as a personality, character and musician in Lordi!

„If I think back to when I started in 2005, I remember going on stage in this big costume for the first time. Feeling really clumsy in these big boots thinking if I step on the chord I'll fall and break my leg. Also thinking WTF, you're supposed to play in this thing, I can't even see anything! And that was true because I wear contact lenses because my sight is pretty bad. And at that time I was wearing these OX effect lenses live, and they were not strong enough, so I didn't see much. My setlist had be to double size so I could see the next song. Now I only wear those in the pictures and videos, and live I use my own contacts. So there's been a big development in that sense at least, cause now I feel normal in this costume on stage. It feels like me, like I've always been like that. And of course playing hundreds of live shows with the band and making many studio albums, one would hope that you've learned something on the way.“

What is the most important for you on the new release of your Finnish monster-bunch?

Which noteworthy (small) differences to the previous album(s) are waiting now for the curious listeners on „Sexorcism“?

„In my opinion it's a nice mix of old Lordi and modern Lordi. Of course with a different theme also.“ 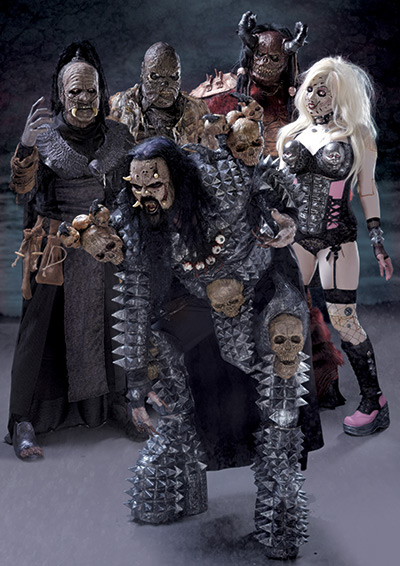 What’s your very own personal view about the partial humorous twinkling ‚spirit' of these new release?

„Love it! I love the lyrics! When those two sick heads, Mr. Lordi and Tracy Lipp, put their dirty minds together, this is what you get. I absolutely love it.“

The new music is very cool rocking, but sacral-atmospheric and welcome emotional, appears fully genuine … what kind of emotions dominate these songs?

Be so kind and bring the main lyrical content of the new tracks a bit closer! Guess, songs as „The Beast …“ talking a clear language …

„Well, I guess the beast hasn't come yet! Haha!“

The songwriting process itself, what is to tell about in general - any changes to the past?

„At least for me, again it happened really fast. For some reason with this band we never have enough time, so it was like 1 or 2 rehearsals and then it's off to the studio for me and Mana. At that point you kinda know the songs and you just guess the rest! This is how it always goes for me and Mana, and then the rest of the guys come in with all the time in the world! But I'm really happy with the result.“

Who wrote the lion’s share of the new songs?

„Difficult to remember. Starting from the demos, maybe few months. And when it's ready, you wait 6 months for it to come out.“ What have been the hardest / most difficult passages of the done songwriting-process? „Waiting for the album to come out!“ Please tell a bit about the line-up situation and the chemistry in the band! „I think the line-up is absolutely perfect now. For example I have to give extra credit for Hella, who has been on tour with us for two months while she's pregnant, twice, and I don't remember her complaining once. A good line-up must be one of the hardest things to achieve in a touring band. It only takes one bad apple and then everybody suffers. Of course there has been few bumps on the long road but they have been pretty much solved. We're lucky in that sense.“ The costumes still rule … is it still the same designer? „Thanks! And yes, it's Mr. Lordi who designs and makes the costumes. Couple last times he has had priceless help from our props lady, Jessica Love.“ What still drives you mainly to do what you do? „I know it's a cliche, but love for the music and love for the bass. And Lordi is just my kind of music. That's it.“