Regarding to the trio, a particular need of these „characters” consists on recording their very own music in scary places like cemeteries, catacombs, crypts or deconsecrated churches, where they can easily connect with the death.

Lamentu was formed by LiotruM, at the beginning of 1997 together with Ummira and Jafà. Their unconventional sound might be best described as cruel Black Death Thrash Metal with very interesting afro- and tribal influences, as the new album release „Liack“ shows.

With their bizarre music they want to honour the Liack-Aru demon, sovereign of the black continent. My questions were answered by LiotruM, vocalist, guitarist and synth player. 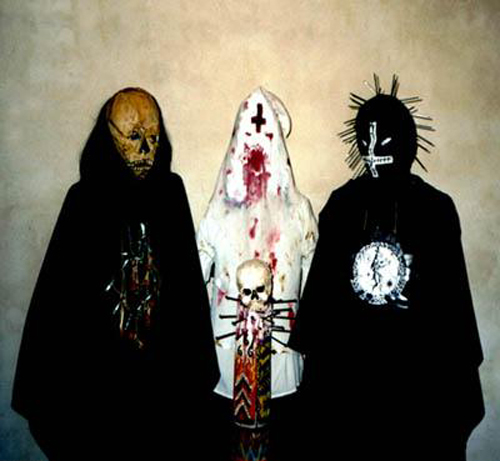 „Lamentu was formed from me at the beginning of the 1997 with bass player Ummira and Jafà on drums and percussion. The first act our story was released with this formation. In a next future Lord Timpesta (Inquietu) near our sound, will enter in Lamentu band... The important common point of the Lamentu's members is the evil attitude, and respect for our Lord Liack-Aru demon, sovereign of the black continent...”

The trio infernale is proud as hell about their new album:

„We are very proud for the 'Liack's realization. Our fans are very satisfied; this album has some new music components. There are Black- and Death Metal parts but extreme atmospheres afro/tribal also, it might be a new interesting extreme sound for the metal music.”

Lamentu are a strong minded troup, so they give a shit about critics.

„We compose only for us. I'm happy when the fans and journalists understand our music. For the moment we have received good reviews...”

What does the bands name mean?

„'Lamentu' is a Sicilian word for 'Lament'. This name is our state of mind and I think of much guys also.”

„'Liack' is the kingdom where Christians were tortured with voodoo rituals. I think that one of the curses of the whole humanity are the religions, Christian in this particular case. 'Liack' is a journey through the ancient land of the 'black' Africa, where Liack-Aru anti-Christian demon lives.” 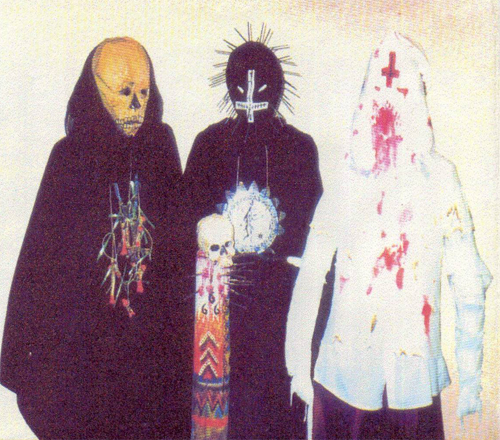 What is the main-concept or theme behind the new album?

„We tell the ancient and mysterious order of the Liack kingdom. Its demoniac hierarchy, the magic rituals, the cruel torture ways. Through this fantastic journey we want to open the eyes of the guys on the real themes as Aids and all Christians suppression.”

LiotruM, please tell us about the mentioned ancient Sicilian cults, which found in the lyrics of Lamentu their place.

„All the bands of Mediterranean Scene sing with ancient Sicilian dialect and English telling arcane legends our area. We use our language because better for our themes and legends, it's much musical.”

During the studio recordings these summoners had a great time.

„'Liack' was recorded, mixed and mastered at Castiu Studios of Agghiastru. We 've got played for two months in August/ September 2001 it was very cool and the finally work for us is fucking great.”

The ideas are often flowing like a stream in their brains.

„We play night and day – because we believe in the force of music, so our compositions come us very fast. I and Jafà are the main composers, but all together also. When I take my guitar for a new compositions, I have in my mind the main themes and the atmospheres for the music. Africa is a great and mysterious land for our inspiration all together feel the great attraction for it ... there is a sick air while we compose...” 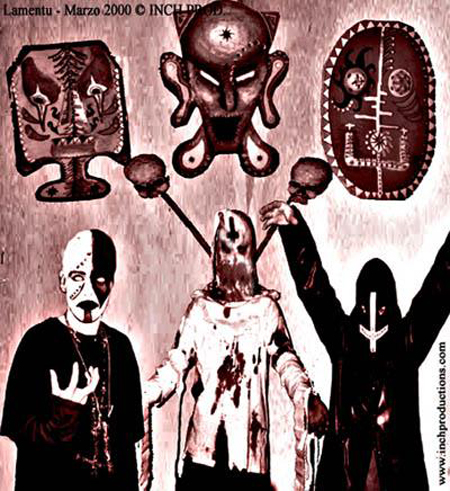 And the same intention is ruling while they write all their lyrics.

What is your very own categorization for the music of Lamentu?

LiotruM explains the songs of „Liack” with his very own words.

„Well, 'Trasuta' is a atmospheric intro for the black concept... 'Liack' the title track, is a killer song very complete for all our influences. It tell of the Liack-Aru's kingdom... 'Animalura' tell of a ancient and curse ritual, 'Aggrissu' is a battle between the Sun and the Moon, as a mysterious eclipse. 'Tribal Dance' you can know from the title... 'Pilunia' is a particular jinx for the Christian germ. 'Sceusa' is another song of macabre rituals. And 'VuV' tell of the Liack-Aru's followers very dreadful evil dwarfs... 'Erva Tinta' is a Sicilian word for weed tell of the life in this world of shit... The last song is a atmospheric sound of Liack-Aru slumber and his nightmares.”

In the future Lamentu gonna play live, but only in their home country.

„Live activity of my band for now will be destined in Italy only ... when all fans will know our music we can come to Germany also.”

Plans for the future are in first line, to create a follow up to the new debut album.

„We want compose new material for the sequel of 'Liack' – but now is the moment of our great debut CD!”