When the news of the reunion transpired, the hearts of countless Thrash Metal disciples beat faster, because these Californians count with their early works to the old masters of the genre itself.

Everything else recorded as being frumpy and also produced, these silver plate shows many youngster formations in most impressively manner, where the Thrash hammer hangs.

And „Left For Dead“, this gorgeous boisterous thunder plate, presents a resolute group of returnees, who are ready for anything. Lääz Rockit reveal itself as a bunch that is firmly determined to turn the wheel of musical fate again vigorously. 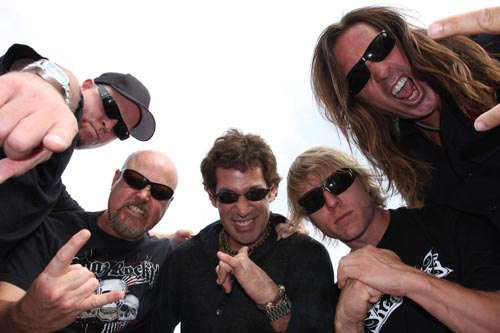 Which are your main current responsibilities in the band?

„I am the primary song writer in the band and I was the founder of this band in 1982. It is my responsibility to keep an over all vision of the direction of our sound and feel.”

Why should buy listeners the new CD of Lääz Rockit?

„I think the new CD has a great sound and flow to it that everyone will really like and it will also give the listeners a chance to hear what we’re all about now. If you like great guitar work and big drum and bass sound then you will really dig the record.”

What can you do for the fans with your new songs that other candidates can't?

„Well I think everything has been done to a certain degree but we have a sound on this record that is truly unique. It's really a hard hitting in your face production that grabs you from the beginning to end.”

Why are Coons’ vocals most of the time similar on the new record? I miss variation!

„Hmm. Well he is who he is vocally and I think on ‚Ghost In The Mirror‘ and ‚Desolate Oases‘ he shows he can bring a variation and range that is truly original and classic Michael Coons.”

What are your lifelong dreams with Lääz Rockit? 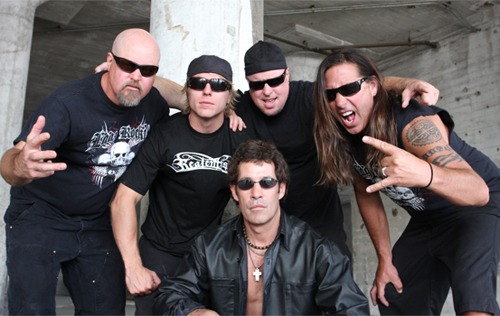 „Well in the beginning it was making records and touring till we were able to make a living at it. But after 10 years of blood, sweat and tears (literally) it was not a winning proposition. We went through a lot of tough time together and our lifelong dreams were pretty much tanked when it was over. Now we are just glad to have the opportunity to be able to do this record on our own and call all the shots on our own and I think that was our ultimate goal.”

Tell about a time where you had to deal with conflicts in the music genre!

„It was after our first record ‚City's Gonna Burn‘ when we were diving into our second record there was so much influence from MTV and all the L.A. Rock screen that we were persuaded by the record company at the time to sound or look like a certain way and it was really tough because half the band was like o.k. and the other half was like whatever. So what we came up with was a very mixed sounding record which was our second album and it showed musically and visually.”

„My strengths are my mind body and spirit. I have a great musical upbringing and training and I have a good ear for music. I love all kinds of music so I believe that having an opened mind musically can be to an advantage.”

Please provide examples of ideas that you have had for the new music of Lääz Rockit!

„The whole ‚Left For Dead‘ record is a great example. I have been working quietly on this project for a long time.” 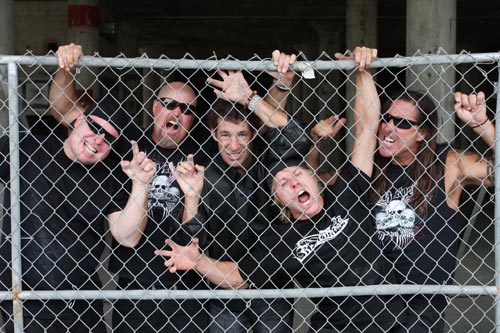 Tell something about your proudest achievement!

„I would have to say that my proudest achievement would be this new record. This is the record I've always wanted to make. I was able to see the whole project through from beginning to end and make all the important decisions all the way through. I'm really grateful that Massacre Records gave us the opportunity to put it out in Europe and I'm just really happy with the overall album as a whole.”

„Some of my older favourites were UFO. Mahogany Rush, Tygers Of Pan Tang. Black Sabbath, Ulrich Roth because of the guitar work. Some of the newer generation Metal would definitely be my boy's in Exodus, Black Label Society, Pantera; I think Dimebag was one of the greatest personality’s and guitar players in Metal Music. He had great vision and great attitude. R.I.P. Dime! Shadows Fall, Testament, Slipknot, Killswitch Engage are some of the newer Metal bands I dig.”

Why do you make still this kind of hard music?

„Because it's in my blood and I still have a lot of pent up aggression inside of me that come out in the music. So instead of getting all beered up and kicking someone's ass I go into my studio and beat up on my guitar.” 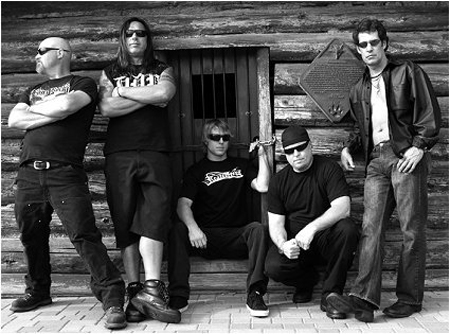 „Well probably right where I am now – in control of the overall flow of the band. The band will be 30 years old in five years so it's hard to say.”

Who brought Lääz Rockit to the current record label?

„We were directed to Massacre Records by friends at Nuclear Blast. Were really looking forward to working with our new label.”

When were you most satisfied in Lääz Rockit?

„When we were done mixing this record. I truly amazed at how it turned out and I'm really looking forward to see what kind of response it get around the world. I would also like to say thanks to all of our supporters over the years and we look forward to coming to Germany soon. Cheers and stay heavy!”