„We love that what we do as Krisiun, over all“, announces guitar-martial-virtuoso Moyses Kolesne in all nonchalance – and on that no one doubts meanwhile.

For he, its perverse complexly drumming brother Max as well as roar-giant and depth toner Alex Camargo setting for many years energetic brutal under proof, album for album, that they belong to the very best and also most uncompromising carnage-specialists of its specialty. Even absolute intricate seeming velocity changes in lightning speed are obviously more easily for them as going the way from the pub-table to pissing.

The monstrous Death Metal of this Brazilian hyperblast export hit causes entire landslides at corresponding volume out of. And since the new studio album „Assassination“ makes no exception.

Hey Moyses, how are you guys doing at the moment? 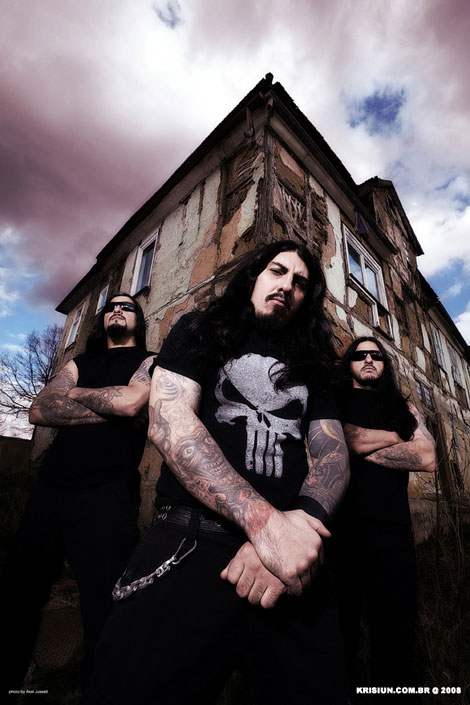 „We are expecting to go for the next tours and getting ready for that. Also looking forward to see our new album out.”

„Very good. We share a lot of things about music.“

What is to tell in general about the new CD „Assassination”? Please describe your new creations a bit!

„Its a step further from all we have done before. We reached a higher level in our music and production. This is the album all Krisiun fans want to listen to.“

About the development of your new songs?

„We just start jamming and it all came out, there´s a lot of brutal, fast and groove stuff within a crystal heavy brutal and clear production.”

Which inspirations led to the new monster creations mainly?

„Our own path inspired us the most. All the people who are against us here they will prove our venom of vindication.“

Which one of the new creations is your favourite song?

„We like all the songs on the same level.”

How did the recordings and production for „Assassination”?

„Very smooth, Andy Classen is an amazing producer. He makes us feel very confident and he reached our best performace.“

The infernal machine-gun drumming of fur-beater Max on „Assassination“ is more inhuman than ever. Hyper-fast, hyper-precise, hyper-dynamic and mega-brutal. How many hours a day is he doing practice?

„He practice a lot but he loves what he does so it became part of his life an immense driven desire which lead him to the utter most of this concerning matter.”

Also the guitar work on „Assassination” is sheer unbelievable … it must be surely immense difficult and hard to reach such a high degree in perfection. Did Krisiun make a pact with the (Brazil) devil in the end? Or do you guys rehearse like hell each day? 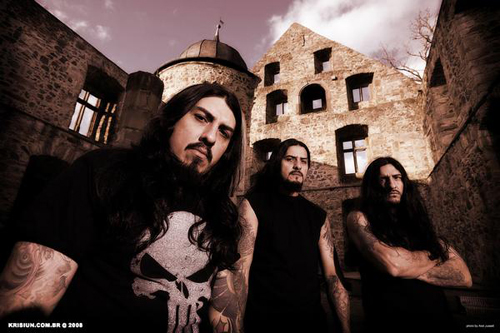 „We sold our souls to Death Metal! No, I guess we are normal musicians not better than the others its not competition but inspiration and driven desire.”

Why did you cover Motörhead´s „Sweet Revenge”?

„We are huge Motörhead fans, so it was the right time to pay a tribute for the Metal godz.”

What does mean the title of the new album - nowadays world situation?

„Yes it deals a lot with the reality we live today. A nation which can´t stop the killing. Guided by greedy politicians.“

Please tell a bit about the lyrical contents of the new release!

„Its hard for me as Alex is the main guy concerning for lyrical stuff, he still dealing with the obscure side of life but all based on the reality we live. Not much stuff from the past or fantasy, he is very grounded on the present real world.“

The new frontcover art – who did it and what is the meaning behind?

„Its the symbol of death running free; Jacek Wisniewski from Poland did it, he is an amazing artist and he captured the real meaning of this album with that cover.”

Your personal opinion about the ,new‘ global situation of our planet with all horrible terrorism and bloody news day by day?

„The world history is full of lies which are beyond our normal civilian understanding. The national leaders commands the earth future with religion and politics for their might greed. So the truth is underneath reality. The ones who defy the system died, the world is full of shit and life is short. There´s no time to even think what is real or fake, we normal civilians are like puppets from politicians. So that´s why we sing the chants of death against the religion and politician system, we won´t bow before...” 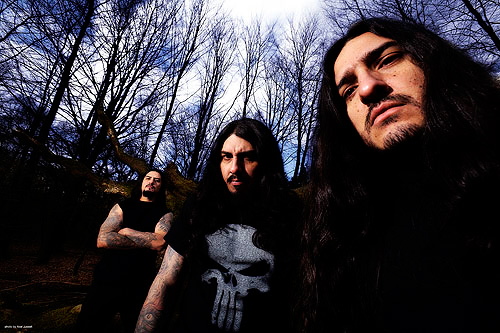 Which bands are your favourites?

„I guess the one at the Party San fest in Germany was one of the best.”

Which thing do you hate mostly in this world?

Your wishes for the future?

Your (tour) plans for the future?

„We will tour in Europe with Severe Torture and Hate, USA with Morbid Angel, Behemoth and Despised Icon. That´s what I know so far. Thank you very much for the interview, Markus – all the best!”