Whether the playful woodsmen around singer Jonne Järvelä brewed themselves a magic potion that gives them increased powers cannot be announced with certainty.

But the surprisingly powerful and almost boundlessly lively songs of the new, snappy album „Jylhä“ at least suggest that. Sami Perttula, accordionist in the thirsty horde since 2013, reports on the new, dynamically and impetuous outbursts.

What a powerful return - I love it! How does it feel for you?

„Every time when we have finished recording it feels like now we have done the best Korpiklaani album ever. ‚Jylhä‘ feels like the most completed album we have done and I can honestly stand behind my words what came to this. The songs are clear and catchy and arrangements are well done. It’s an album with high quality. That’s the result from that we used a lot of time with demos and arrangements.“ 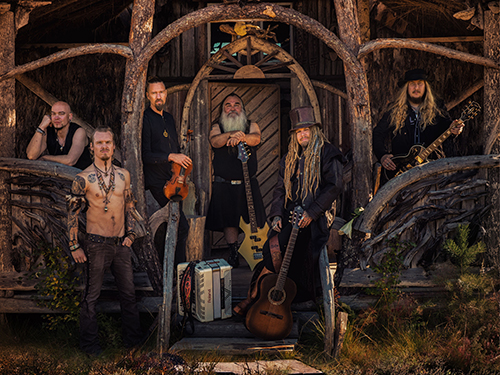 The sound is pretty fat and beefy - who produced it?

„Janne Saksa. He is also known as a producer for Turisas, Stam1na and Mokoma among many others. He is easy to work with and all our recording sessions with him have been really smooth.“

For what kind of musical ideals stands „Jylhä"?

„We wanted to do an energetic and fast album after ‚Kulkija‘ - and again make a better album than ever. We also have new highly skilled new drummer who doesn’t seem to have any limitations about what kind of songs we can write to this band so that kind of set up gives more freedom to musical ideas.“

What is the most important fact for you on this new album?

„Maybe that age is really just a number. Even though this band can be described as a veteran band it's nice to hear and see that everyone still has a lust to develop music and go forward as musicians.“

It feels partly truly touching for me to listen to highly lively songs beside the slower parts - what kind of emotions dominate the new material?

„This is the way Jonne writes and how the music comes into him. At first the original idea was to make a ‚Painkiller‘ fast and heavier album because of the new influence of our drummer Samuli, however the flow of the songs ended with this kind of emotion. It was also clear at the time, the subject of the lyrics were going to be darker. We write how we feel at the time and let the music talk and not compose how we think it should be. First song written for the album was ‚Niemi‘, which is fast and heavy.“

What topics do your new song texts deal with?

„Again Tuomas Keskimäki wrote lyrics to us and those are more heavy than in ‚Kulkija‘. Still the music is uplifting and powerful even though many themes are about murders and depression based on Finnish folklore and stories. I personally like there are stories behind text and it can give completely new meaning for the song when you know context.“ 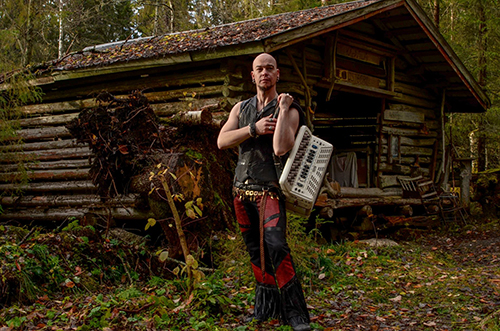 „Like before: our ‚primus motor‘ Jonne wrote most of the songs, Samuli and Jonne wrote one together, Juho (our ex-accordionist) wrote two as well as I did. I think Jonne sent us first demos approximately a year before we entered the studio. Last half year before recording sessions was quite intensive.“

„I think it's the same kind of thing when you try to move a heavy object from place to another one: after you make it moving it’s not so hard anymore to push it. With that I mean that it’s important to get inside the song first. I see songs as human beings who have different kinds of personalities and needs so to understand the character behind the song is the most difficult thing for me.“

Is it allowed to ask you about any special musical influences which may lead to the new material?

„For me I try to catch the same feeling when you first hear interesting music and fall into love with what you hear. It raises up adrenaline, makes the heart beat faster and causes different kinds of emotions that feel bigger than reality.“

How much are you still interested in the current music world, the Rock and Metal music scene?

„I try to listen to new music every time when somebody releases something new and to stay aware about what’s happening. I want to encourage all bands to be brave and do their own kind of music open minded. Originality is interesting! It seems like all those bands that have grown big have found their own voice and style to do things that make them feel honest, individual and original.“

„Stay safe and see you on tour after we get rid of this pandemic!“