Not many bands did succeed over so many years in being artistically so open and yet loyal to their own art. However, for Korpiklaani, founded in 2003, it represents something completely natural and self-evident, as also the most up-to-date recordings reveal again with ease.

So the new album „Kulkija“ shows the lively art of the Finnish Folk Metal wood-souls from various, partly unexpected refreshing sides. With „Kulkija“, they can not only keep their pioneering role with dignity, but the durable bunch can also expand and consolidate it.

As guitarist Kalle ,Cane‘ Savijärvi is happy to chat, Korpiklaani are enjoying continuing popularity in the area of the genre. 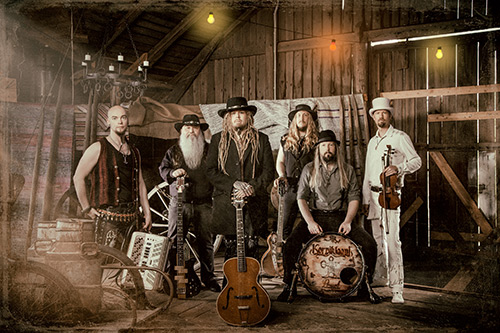 What can you report mainly about the global feedback for the previous album „Noita“ out of 2015?

„Feedback has been very good. There were praising reviews and also the high streaming numbers tells the same thing. People seem to like the way we are going with the band.“

How do you feel now, after having finished these new, this time a bit outstanding collection of songs on „Kulkija“ finally?

„We finished the album for some months ago and I can say we are very proud of it. Six weeks still and it will be released finally. There are two singles out from the album already and the comments are very positive. We are so anxious to read all the reviews and hear the opinions about the whole album.

„It’s Folk and Metal mixed in the way only Korpiklaani can do.“

What is the most important for you on the new album release?

„When we have enough songs ready, it is important for us to get them released. Empty the table and continue writing.“

„This time we were concentrating to the overall sound of the album more. Trying to get it more natural and also give more space for all instruments. Sami did a great job with folk arrangements and now you can clearly hear them.“ 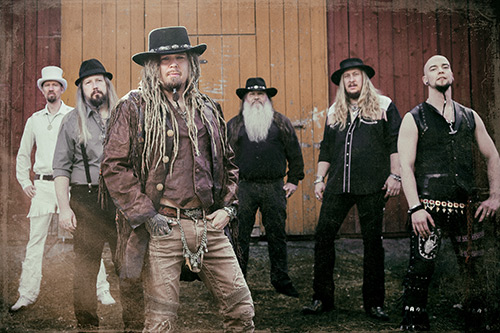 What’s your very own personal view about the traditional themed ‚spirit' of the new album?

„Accordion and fiddle keeps up the traditional spirit on this album same way as on the previous albums. It’s all about those folky melody lines.“

The new music of Korpiklaani is often times dreamy, longing, relaxing - but atmospheric and welcome emotional. The whole appears fully genuine … what kind of emotions dominate these songs?

„There is no one dominating emotion, but the album goes through many different ones. It is a little journey with happiness, joy, longing and sorrow.“

Which special visions are raising in your mind while playing these new material?

„Well, if I start to see special visions while playing, I know the mushrooms are working.“

„One good source of inspiration was and has always been a new guitar. This time for example a new nylon string acoustic guitar gave Jonne a few songs.“

„Kulkija“ - what is behind these title?

„Title translates to a wanderer or a wayfarer. Lyrics are much about experiencing the world with one’s eyes. In good and in bad. I think it also relates to the band’s touring life.“

„I think the opening track “Neito” (Maiden) is a good example of the albums lyrics. The road is a wanderer’s bride, a maiden who he misses and who he travels with. However, the real maiden is waiting for his return home. After a journey you may bury your carriage, but the wistful traveler’s songs and music will be carried where it lies. A traveler was born to wander.“ 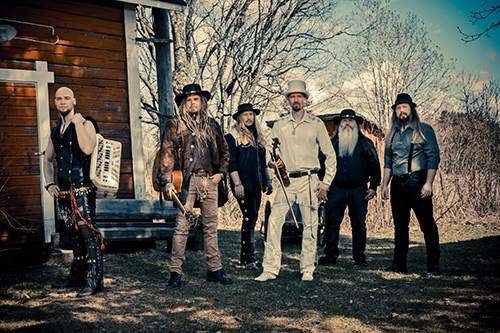 The songwriting process for „Kulkija“ itself, what is to tell about in general? Any changes to the past?

„Not really, but this time Sami wrote two songs and Tuomas did one also.“

Who wrote the lion’s share of the new Korpiklaani songs?

„Jonne wrote the most of the material again.“

„As I said before, we are writing all the time so the first songs were written right after “Noita” recordings. In total maybe it took about two years for all the material.“

What have been the hardest / most difficult passages of the done songwriting-process for „Kulkija“?

„Pre-production and the arrangements took a lot of work.“

Please tell also a bit about the line-up situation and the chemistry in Korpiklaani!

„Line-up has been stable now for few years. We enjoy each others company and the chemistry is very good in the band.“

What still drives you mainly as an artists to do what you do?

„I think it’s the love for the music in general. We like to play and write music. What would be better than work with something important for you?“