Somehow it seems indeed real impossible, and yet manage it singer and guitarist Jonne Järvelä and his faithful Finnish Folk Metal team, in terms of musical transformed vitality again and again to put one thick shovel more.

Same also on the newest album „Ukon Wacka“, on which the just really extremely playful bunch of men celebrates its snazzy drink- and celebration songs. And this they do with almost gigantic enthusiasm. This way the six self-confident Finnish hillbilly bring all senses ease into shape.

The ever-thirsty Scandinavian forest- and meadow guys thus establishing itself once again as stylistically faithful rout with its own musical fragrance brand. That latter also exudes massive nuances of hard liquor, the fans already know.

Such tangy and dewy these kinds of contagious frenetic songs probably anyway can be done only, if one like Korpiklaani stands ideally fully behind the lyrical content of its own music. Jonne is happy again for an informative dialogue. 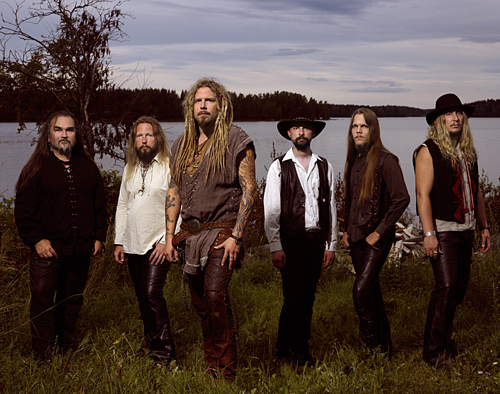 What is mainly to tell about your music on the new Korpiklaani record „Ukon Wacka“?

„Ukko is old and most important Finnish pagan god of weather, harvest and thunder. Ukon wacka is kind of a ritual party for Ukko to guaranteed the good harvest. People was drinking a lot and sacrificing good food and other things to Ukko. Main reason in Ukon wacka feast was ask enough rain to make possible agriculture. Ukko was also a god of hunters and according to some myth Ukko helped to find the catch in the forest. Nowadays we still have this same feast but now its name is "Juhannus". Midsummer party. The new album is not a theme album but Ukko is kind of red line, which connect the album loosely. This is more folky than the last album. Reason for that is, we hired Tero Hyväluoma to arrange my melodies for the folk instruments. Fiddle, accordion and flutes. Before we didn't arranged the instruments and harmonies before the album recordings. Now everything was ready when we went to the studio and it saved the time and made the recording more easy and relaxed. There is also a guest singer on the one song. Tuomari Nurmio, which is very famous artist in Finland sung the song "Ukon Wacka" which is quite heavy and slow tempo song. This was the first time he sung Metal music. His visitation on the album is a great honour for us. He has more than 30 years knowledge about singing and being on the music skies. I'm very happy about the album and its songs. I couldn't leave anything out of it. It is just like it should be. At least I have now that kind of a feeling ...“

„Our sound is quite happy, which is not so common in metal scene or even in folk metal scene. Even, that we are mostly using minor scales and chords. Also our instrumentation is synthesizer free. All of the instruments are real, which is again, not so common in Folk Metal scene. Normally the bands, which are using real folk instruments are using background tapes a lot but I think it limits live playing very much because if you are using background tapes, you must play the songs always same way and same tempo. I think, that would be very boring.“

„It is "Tequila". It is not so "Korpiklaanish" song but it is very fun. I wrote it just after the South-American tour and the song is about our South-American tour. Lot of tequila, caipirinha and great atmosphere! We managed to catch this feeling also for this song very well.“ 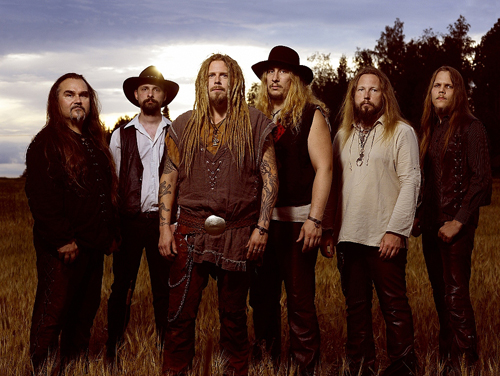 In what studio the album got its excellent sound?

„Petrax studio locates in countryside, pretty near where I live. It is perfect place to record Korpiklaani music. There is easy to get right kind of mood and some how the place is very relaxed. You can watch from one window through wide fields or other window to the forest and play the same time. Years ago we recorded our albums in dark cellar basement without any windows and it makes me crazy to be the place like that days and nights. In Petrax is a feeling of freedom and you can just do what you do better. Aksu Hanttu was a producer like on the last album and as I said before Tero Hyväluoma was producing the folk part of us. I'm very happy for the result, so we are going to keep this style also on the next album.“

The new material sounds surprisingly partly pretty energetic and in a way ,sharp‘. How has developed the whole thing until that fine result?

„This time we rehearsed before the studio time. [laughs] We are not done this enough many times before the recordings and it sounds now in a way "sharp" of playing.“

Are you guys fully satisfied with the production?

„At the first time, we all are 100 % satisfied. Right now I have a bad feeling, how to hell we can do the things better on the next time ...“

What meaning lies behind the title?

„The album is pretty "summerish" so the title is incisive. There is no any big meaning but some kind of seek of good mood and happiness of playing I want that radiates out of it. Playing this kind of music is the best meaning for us and people, who are listening it can find their own meanings out of it.“

Please bring the lyrics of the tracks a bit closer! Special lyrical topics worth to mention? 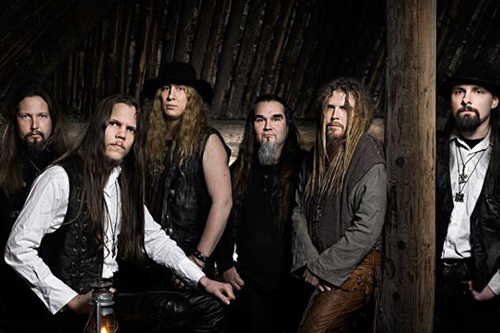 „We got again some help for the lyrics from Juha Jyrkäs. He wrote lyrics for five songs on the album. I wrote the rest. Juha's text is more like ancient Finnish or Scandinavian myths and my text is more humoristic or typical party kind of lines like Päät pois tai hirteen, where is the unlucky farmer. Everything fucked up there in his farm. You know, "The bull won't get "it" up. The cows refuse to "do" it. The rooster won't wake before noon". Then again Tuoppi oltta, which means Pint Of Beer is Juha's lyric and it is about manly needs, which are of course cold beer and hot women. There also is inspiration for the lyrics from the movies, myths and old fairy tails like Koivu ja tähti; "The Birch And The Star" is based on the same-titled fairy tale, written by a famous Finnish fairy tale author Sakari Topelius (1818-1898). The narrative deals with ware faring Finland, in which a captured boy and girl are on their way back home during the Russian occupation of Greater Wrath in Great Northern War (1700-1721). The only note that makes them recall their home is a birch, on branches of which they recall birds had sung every morning, among the star twinkling through the branches. Regardless of the horrified ones, the children set forth and eventually after one year of walking they find their home, guided by two little birds. Their parents rejoice greatly when instead of two dead children they receive alive ones. The children comprehend the spirits in the form of bird were their dead siblings.“

Please tell about your proudest own achievement on these album.

What are you looking for in terms of development of Korpiklaani's musical style?

„We have already our own sound and style, so I just want to develop as songwriter. Always to write better songs is what I'm looking for.“

„To get a gold record from Germany to my mom's living-room wall!“ [laughs]