The six-pack from Finland around guitarist and singer Jonne is finally back.

With their new studio album „Tales Along This Road“ these well known Folk Metal woodmen crossing their own unique artistic paths once more.

And, as the title itself already announces, Korpiklaani tell the listeners not less as out of their own lives. I am talking with bass player Jarkko about the new release.

How are you doing, dude?

„I'm doing fine, thanks. Anxiously waiting for the spring but the winter doesn't seem to want to let go.“ 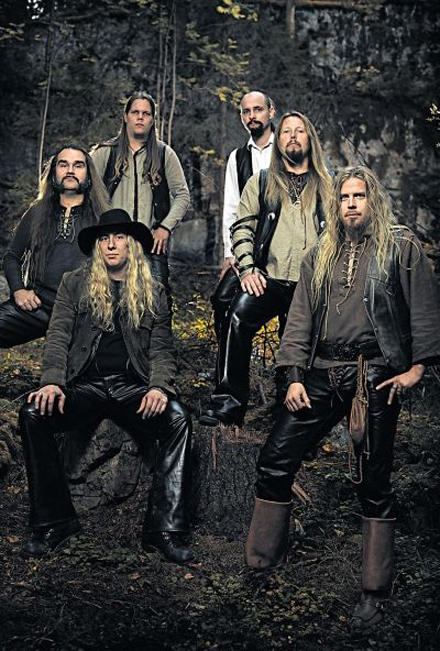 „I think it's great. I am the latest addition to the lineup, so I can't really say anything about the chemistry with the previous lineups, but this one feels really good. We have six members, eight if you count the crew. Everybody is a different kind of person and enjoy different things in their personal lives, but within the band everybody is working well together for the common goal. Ofcourse there are some personality clashes every now and then, especially on tours, when you spend 24 hours a day with the same people, but we get past them because there is always that mutual respect between us.“

„Definitely playing live. There's nothing better than that. Touring itself is not that much fun. Just driving around the Europe and not really seeing anything. Sometimes you get to read about musicians telling how they've been to Paris, Rome, London, Tokyo or whatever, but the truth is that being in Paris doesn't mean you've actually seen it. But the hour and a half we are on stage makes it all worth it. It feels so good to see all those people dancing and having fun with you and your music. Another great thing about the band is that on tours we get to meet a lot of great people. After the tour everything gets a bit blurry and you can't usually remember the exact dates or places, but you will always remember the good people. Last December we had a day off after a concert in Maribor, Slovenia and the concert organizer spent the day with us, showed us around, took us to the mountains and so on. He didn't have to do that, but he did. That is something I will always remember.“

The new bandfotos are great! Who made them?

„They were taken by Toni Härkönen, www.fotonokka.fi. As far as I know he has worked with many other artists as well, for example Nightwish and Children Of Bodom.”

How would you describe the new creations on „Tales Along This Road“ to starters? To my mind the new album, which differs a bit to the previous, is not the very best work to date. I miss real quality and fine hymnic melodies. But the rhythm section is awesome! What´s your opinion about it?

„First of all, I am sorry to hear that you didn´t like the new album that much. In my opinion it is a lot stronger album than the two previous ones. The material is more coherent this time and there are no filler tracks as there was on the previous ones. Of course I am slightly wrong person to judge these since this is the first album I am on and my relation to these songs is therefore a bit different. I agree about the rhythm section. I'm not saying that it's now better than before, but some of the songs rely very heavily on a steady rhythm and staccato-like guitar riffing, like "Väkirauta" or "Kirki". However, I don't really agree about the missing melodies. The stuff is still very melodic but the heavy guitar riffing is much more dominant on this album and the flute and violin melodies are not necessarily the focal point as they pretty much were on the previous albums.“ 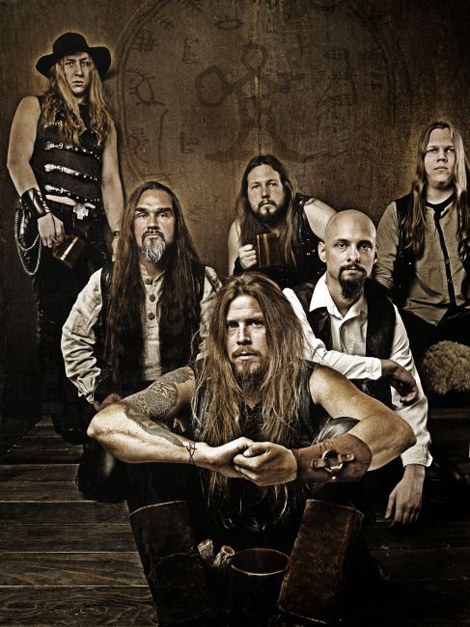 Do you have a favourite track on the new album?

„There's quite many of them actually and my opinion even keeps changing so it's quite hard to point out just one song. When we were recording the album I was really looking forward to hearing "Kirki" finished, because at that point I thought it was the best song on the album. "Kirki" did turn out really well, but some other songs turned out even better than that. For example Juho's song "Midsummer Night" is a great song with great melody lines. "Tuli Kokko" is another favourite of mine. Really a quite simple song but a great riff and a bagpipe on top of everything. "Spring Dance" is also quite nice one. For some reason that song makes me want to do something. Doesn't matter what, it just makes me feel like I'm in a hurry to do something!“

Who wrote the new tracks of „Tales Along This Road“ mainly?

„Jonne wrote most of the music. Juho wrote one song, Midsummer Night. However, Hittavainen has a big part in the music as well, since his melodies with violin, flutes and everything else make a big difference in how the song finally sounds like.“

I don´t like the new album frontcover at all! Who had the idea for it and which conception is behind?

„The title was Jonne's old idea based on the fact that the songs indeed are stories from along the roads of our lives. The title was combined to another old idea of our old shaman logo getting some flesh around it's bare bones. And there he is now, standing on his own road with his bag made of birch bark full of untold stories.“

Please tell some musical influences for the new compositions of Korpiklaani!

„As far as I know, at the time Jonne was writing the songs he was listening quite a lot of old school Thrash and Speed Metal, like Kreator etc. When you combine that with the traditional approach he's always had the result is the new album. More hard guitar riffing than before but still the same traditional melody lines and of course the same old humppa time.“

„That depends a lot of the mood I am. Nowadays I mostly listen to old Progressive Rock, like Jethro Tull, Rush or old Genesis. However, I was a teenager in the 80's and I still enjoy bands like W.A.S.P, Iron Maiden, Saxon and Motörhead. Lots of different stuff really. And let's not forget my all-time favourite: Black Sabbath.“

Please describe the lyrics of „Tales Along This Road“ a bit! 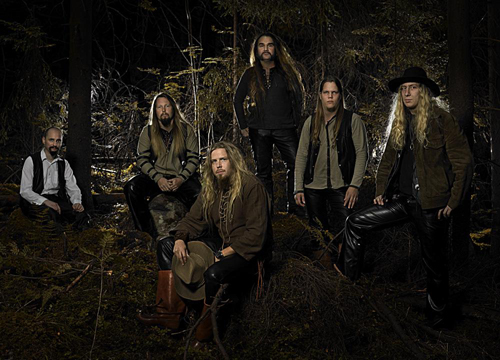 „Korpiklaani does not really have any message in our lyrics. Or if there is a message it most certainly is something like "have a beer and dance". According to Jonne he usually writes the music before the lyrics and then tries to hear what that music has to say. However, this time Jonne asked for a few Finnish texts from our friend Virva Holtiton who is truly an expert in fenno-ugric languages and traditional texts and wrote the music for the finished texts. For some songs Jonne provided Virva a rough idea for a story and for example for the song "Kirki" (Lust) Jonne asked for a naughty or dirty text because the music sounded like that and Virva wrote a perfect text for a song he had never heard. I wrote lyrics to one and a half songs. Juho had a text for his song but it wasn't really working so I ended up writing a new text for the song ("Midsummer Night") only a night before Jonne was supposed to sing it in the studio. I think I used the first line from Juho's original text and just went on from there to a totally different direction. The first half of "Rise" is also my text. That part was originally written by Mr. Holtiton, but it was a bit out of context with the chorus and the rest of the lyrics by Jonne, so I ended up rewriting that as well. So there is actually three different lyricist for this album and all have different approaches to writing. I for example can't really write texts in Finnish because I get too critical towards my own texts and I believe it's quite the same with Jonne. It's so much easier to write good sounding texts in English. Then again Mr. Holtiton is sort of a professional in old Finnish done with the epic Kalevala style and his Finnish texts fit perfectly in these songs.“

How much per week are you rehearsing with the rest of the bunch?

„Personally I play a few hours weekly. There may be weeks that I only play in the band rehearsals, but then there may be weeks that I play everyday a couple of hours. It depends on a lot of things. As a band we don't rehearse that much unless there's concerts coming up in which case we spend a few days rehearsing the set. When I did my first concerts with the band I had only learned the songs that we had in the set then and we couldn't really change the set list much. Since then we've dropped only two songs from the set and added six and we may even bring back one that we've dropped.“ 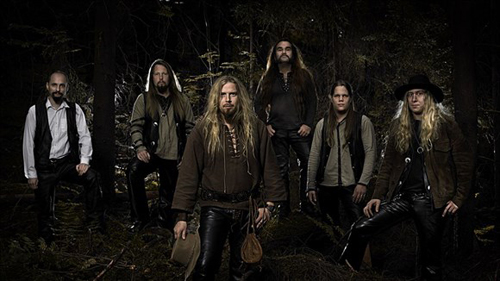 „Free. Just kidding. If I am only going to drink a pint or two I usually order a stout or something like that, but you get so full after a couple of those that if I am going drink the whole evening I will probably go with lager, like Finnish Karhu.“

Main live plans for this year?

„Well, the three-week tour to promote the forthcoming album will start from Hamburg in three weeks on March 29. We are really looking forward to it since we really enjoyed the last tour and this time we are getting better promotion as well so we expect to get good audiences and really try to give their our best. In may we will play a few concerts in Russia like we did in September last year, but this time in bigger venues and during the summer we will be playing at the several festivals around the central Europe including Wacken in August.“

„I am living it right now. I am in band that I enjoy being in, and that band is getting bigger and bigger, slowly but steadily. I guess every band wants to be the biggest band in the world, but usually the journey is much more than just getting there!“