With their second album „Voice Of Wilderness” this Finnish outdoorsman after the successful debut „Spirit Of The Forest“ ram another Folk Metal milestone in the soil of their homeland.

Play-culturally Korpiklaani seem to have even further increased a bit, as their current lively compositions reveal within seconds to inclined listeners. Thus one more dialogue with shaman-bard and guitarist Jonne Järvelä is scheduled. 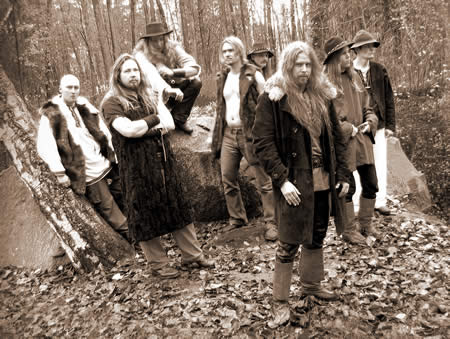 Jonne, how are you doing these days?

„Just fine, thank you. Great feeling, the new album is out and our feelings are exciting but good.”

In which position between acts as Finntroll, Moonsorrow and Ensiferum you see Korpiklaani meanwhile?

„Yes, we have a good and strong Folk Metal scene here in Finland and it is nice to be part of it. You forgot Turisas by the way. It is the good thing that every band that you mentioned is own way to do the music. None of isn`t copy of each other. Finntroll and Moonsorrow uses lot`s of synths and Ensiferum trust their strong guitar lines. Our way is to use only real, original acoustic folk instruments on our album. We might be closest of the these bands with Finntroll because I was on their „Jaktens Tid” album and toured with them after that and I would say that without that two years with Finntroll my music would be totally different because the music is from my life that I live. Everything affect to it. Time with Finntroll was so comprehensive in every way and we were in touch with Somnium (rest in peace) all the time and almost every day so the affect was huge. On the latest Shaman album "Shamániac" was playing two members of Finntroll so it started sound a bit similar some way already then. B.Dominator of Finntroll played also drums at the first Korpiklaani album "Spirit Of The Forest" but if you listen Korpiklaani more you can see that it is not so similar with Finntroll after all. We just have some of same roots to do it. Almost every other Folk Metal bands use keyboards and synths with those folk melodies. We use only real instruments, not synths at all so Korpiklaani is more like pure and authentic and maybe more folk than the most of the others Folk Metal bands. Our roots are deeper on the Finnish ground.

Is there something relevant to tell out of the time in the studio?

„We started the studio work in August. We had little bit more a month to make a record and I can say the tempo was quite nice. No hurry and we got enough time. After all we noticed all the recommendations of the Fantom were right and recording the album was quite easy and fun but went quite fast. Matson spanked and recorded couple of songs right after the drum soundcheck. He didn't need any demo recordings, just "close your eyes and get the right feeling". Rest of the songs were recorded as a band, traditional way. Hittavainen made some violin tracks at home and sent them to studio.”

I have heard some little changes in the new style - even more aggressive and more epic than ever before in Korpiklaani. Possible reasons for this?

„I could say we are heavier than ever. Fast songs are faster, hard songs are harder and even folk parts are more folk. Maybe main reason to changes is that we had a lot of gigs after the "Spirit Of The Forest " album and we saw what was the best Korpiklaani song to our audience. I`m sure that it affected what kind of songs I started to even work any longer when I composed.” 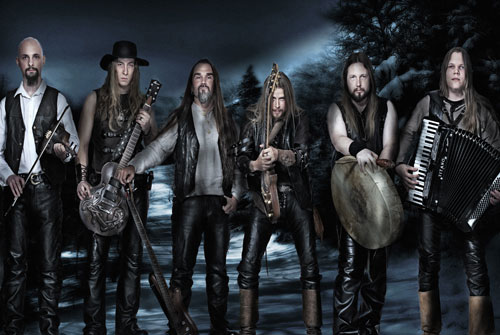 How long took the complete songwriting for the new album?

„Almost all the songs are made after "Spirit Of The Forest". Excluding "Beer, Beer", that is a song from the Shaman age. It is released earlier as "Vuola Lavlla" on "Shamániac" album. I wanted to make it again now with Hittavainen and all his "devices" like Estonian Bagpipe, mouth harp and violins. Also "Spirit Of The Forest", as you might think of, is older material. Earlier I wasn't happy with the arrangements, but I kept processing the song and after all we got a good arrangement and put it on "Voice Of Wilderness". Even if it would have been better on the "Spirit Of The Forest " album. On the other hand it is nice change and traditional Korpiklaani feeling on "Voice Of The Wilderness" CD as well. Rest of the songs we made during six month after release of "Spirit Of The Forest" album which came out November of the year 2003. My way of making new songs is quite simple. I'm just fooling around at home, jamming some riffs and melodies and when I got a good one I record it for further development. We had all the songs together in last spring. I always make the music first and then after that the lyrics what is more difficult to me. It`s always accident which kind of songs it comes. I can`t really make by making those. The songs just come to me from somewhere when I play the guitar. Of course it would affect that I like to play those fast and funny songs on the gigs more that slow ones. We can get the better feeling with the fast songs. I make music in different moods and it sounds on the albums. I don`t want to make only one kind of songs thinking this is our line. Of course I keep in my mind what Korpiklaani is in it`s deepest truth. I want to keep it like we play folk songs but in hard way.”

„Our music is as folk as Metal can be. I never think about musical directions during song writing. I let the songs just come as they come. I try to avoid excessive grinding the song so I want to keep it as natural as possible. But the direction seems to be always deep inside the Finnish forest because I am what I am. Countryboy from my head to the toes.”

What is your own opinion about the new album?

„We are very satisfied of the album. It was great to make it and everything went so smoothly and fine at the studio so we can`t feel nothing but the good.”

How are the reactions and the feedback of the press about your new album to date?

„Feedback is been very positive. I tried to finds some critic and bad reviews just few days ago from the internet but I didn`t found any. All of the reviews are so positive that it`s hard to believe. But I don`t mind it.” 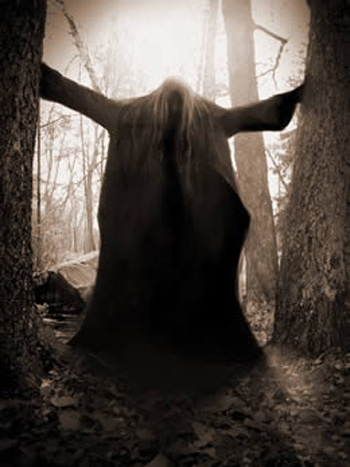 Are any bands as influences for your songs to mention?

„We try to keep our music as original as possible so we going to avoid all too clear influences of other bands. So I can`t mention any.”

Which other Metal acts do you like? Which are your favourites these days?

„I like almost all of these Folk Metal oriented bands like Týr, Finntroll, Moonsorrow, Turisas, Ensiferum etc. etc. but I still like my old favourites from the childhood like Motörhead, Metallica, Iron Maiden, Black Sabbath. It is so many that hard to say it all.”

„It is like the deepest truth of the band. We are the voice of wilderness.”

Which ones have composed the new heroic and overwhelming melodies?

„On the new album Hittavainen made one song "Kädet Siipina". It is my lyrics in the song. Also Honka made most of the backgrounds of the song "Pine Woods". I made most of the melody line in that song. Rest of the songs are made by me. Now when we are created our third album it will be at least few songs of our new accordion player Juho Kusti. He has made a good work. Hittavainen has few songs on the next album as well so I don`t have to do so much to it at the next time.”

„Nature, Finnish forest life and all around it is our biggest influence. We are all growed at the countryside of Finland and near forests so inspiration to the lyrics is from the woods. Making the lyrics is actually quite hard to me. It`s not that easy to me like making the songs and compose. It is nice now ´cause I get some help to it to our next album from other guys of the band. Juho Kusti wants to make the lyrics to his own songs himself so it helps me a lot at the future. Also beer drinking is one of our biggest influences when speaking lyrics and just my own life is big influence.”

„We will keep mostly the same line at the future as before but it might come some of changes because there will come texts others as well.”

Who has done the new frontcover art?

Your personal opinion about it?

„I like it a lot and it fits to our line perfectly. Also photographer Monica Nordling made good work.”

What happens at a forthcoming live show of Korpiklaani? 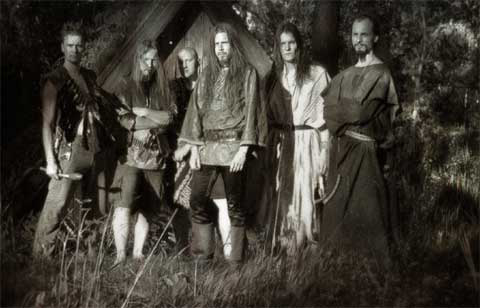 „We have fun on the stage all the time and we have very energetic out put there. Also our music is pretty happy sounding so it comes naturally from the music. Our show depends much of the audience. If we got power and good feeling from the audience it is so easy to rocks the head off.”

„We can only wish the things to happen. I wish that Korpiklaani albums will sell that much that we have a possibility to make albums as much we want. Also I could wish that we all would make this freely. I mean, that we would have enough time concentrates on just this, whereby we don't would be economically dependent from other works.”

Which things are you doing in your free time - hangover in woods?

„Yeah, making interviews when hangover in woods, ha ha! We have no free time. Because we have families except JuhoKusti, Arto and Hittavainen. They spend their free time trying to survive with all of their girl friends beside the band, beer drinking and hangovers.”

„We just got the booking office so we have better chance to get the tours and everything so let`s see. We have booked now one festival gig to Germany, Summer-Breeze 2005 and one gig to Tokio, Japan. Our Japanese record company sold out whole of their stock during first three days of our new "Voice Of Wilderness" album so it is nice to go and see what kind of reactions we get there. Also our video from the new album "Hunting Song" has got some airplay outside of Finland also so it might help our tour plans in abroad as well.”