A perfectly together sworn Black Metal quartet which seems to emerge directly out of stinking shallows of smoky hell's throats, represent these four Norwegian.

And although the bitter fourpiece is going on his new album „Nekrotisk Inkvisition“ really uncompromising, they are not strangers to seductive melodies.

Yes, through and through igniting, murderous material, that counts to the very best and most honest, what this hot fought-for music market has spit out for some time. Therefore they are to be classified smoothly as a pitch black raw diamond of the genre.

Only a few groups out of this profession understand the cruel craft therefore to such an extent quality as these four bite-joyful devil servants. And that's absolutely no wonder, one like to mean, once Mannevond, who represents the bestial heretic throat of the infernal horde, named its personal preferences. 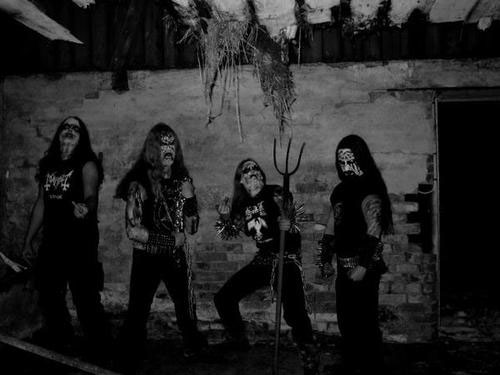 Which bands do you listen?

„Well, I could probably go on for hours here, but I’ll try to keep it short. Generally I listen to a lot of different styles, everything from hardcore to elektronica to whatever, though I must say I prefer the more dark, aggressive and obscure stuff. Metal, and particularly Black/Death/Thrash, is and has always been the main thing for me, no doubt about that, but people have got to see that there is a lot more excellent musick out there, why limit yourself in only one genre? Anyway, bands I really appreciate nowadays are for instance Grand Belial’s Key, Destruction, Arghoslent, Mysticum, Autopsy, Kaospilot, Dødheimsgard, Exitium, Thorns, Totalt Jævla Mörker, Craft, Furze, Ved Buens Ende, Xploding Plastix, Tangorodrim, Terrorizer, Voivod etc. etc.”

Please give a bit of a band history!

„Koldbrann was founded by me in early 2001, with the intentions of making a cold and ugly Black Metal assault, in the old school vein! Guitarist Kvass and drummer Fordervelse joined in about a year later and this has been the core of the band since, though we have had quite a lot of other members joining and leaving. Anyway, we recorded our first demo in the midst of 2002, and this led to deals with the underground labels Desolate Landscapes Records from Scotland and Apocalyptic Empire Records from Norway. Meanwhile we started doing some gigs here in Norway, and a rehearsal tape was also unleashed towards the end of the year. In early 2003 we recorded and released our debut album „Nekrotisk Inkvisition” (just re-issued by Twilight Vertrieb distribution, out on the 28th of November 2004!). Since that we have been doing quite a lot of live inkvisitions, most notably a mini-tour in Balkan / Eastern-Europe, and I could also mention the release of the split 7” with Ljå from Norway. Currently we have been working on new material and preparing ourselves for carpet bombing Germany and The Netherlands this December 2004 (!), along with Endstille from Germany.” 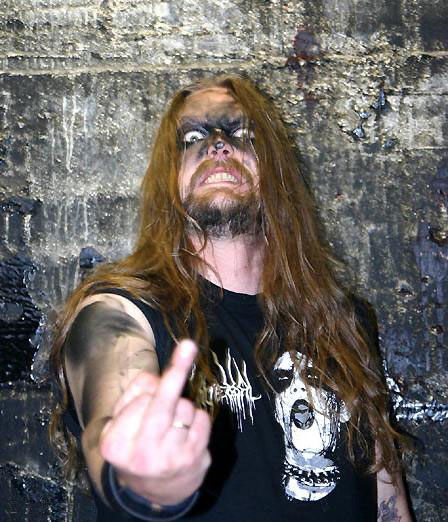 Please describe yourself with a few words as individual persons and characters, what especially the Black/Death Metal scene has made out of you during the years!

„I don’t like getting to personal in interviews, but let’s just say our artist-names / alias are very fitting to our personalities.”

Which things do you really hate on this social rotten earth?

„In short terms just about everything that walks on two legs, and all the stupidity that comes along with it.”

In which way did you got the record deal in Germany and was it hard to get a deal?

„I won’t get into any details, but I think Twilight Vertrieb distribution had been interested for quite a while, if I remember correctly they already got in touch just after the release of our debut album. So when they reported their interest this autumn things worked out pretty well, and we got our ways, so we’re very satisfied this far. Actually we received quite a lot of proposals, surprisingly many I would say, so finding an interested label wasn’t exactly the hardest bit.”

What specific mental states had led to the decision to play such extreme cold and raw Black Metal for the album?

„Black Metal has been an important part of me for many years now, so this came very naturally, and as long as the right feeling and dedication is there we will for sure continue in that vein. Unholy Black Metal!”

In which Black Metal tradition do you see your band - old school? 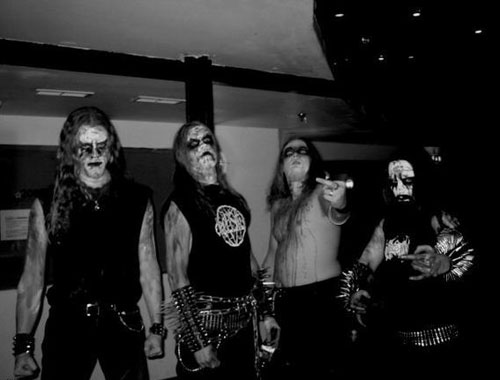 Please describe the lyrical conception of the new album!

„We do not like to talk that much about the lyrics in the first place, it has to be up to each person to interpret them as they want, but generally they deal with topics such as hate, apocalyptic visions, blasphemy, disgust, misanthropy, sickness etc. As they are all written by our guitarist I will leave it up to him in explaining them deeper, if he wishes, to. So far all lyrics have been written in our mother tongue, Norwegian, but I can mention that we most likely will have a few English lyrics on our upcoming releases from now on as well.”

Which emotions do you want to express with your songs?

„Hate, coldness, misanthropy. Sickening and obscure feelings. The same feelings and emotions as we put into this musick.”

How bizarre looks a live show of Koldbrann?

„I wouldn’t say it looks bizarre, but we use corpse-paint, torches, chains etc. to help set the right mood and the atmosphere! Atmosphere and feeling is a very important part when performing Black Metal live.”

Plans for the next months?

„Next week we’re leaving for the tour in Germany, as mentioned. So see you maniac there! Await the Nekrotik Inkvisition!”