With an invigorating freshness, these Finnish enthusiasts went through the composition process for their new album „Betrayal, Justice, Revenge“.

If one listens to the Scandinavian spectacle at a correspondingly high volume, the mixture of martial-savage triumphal certainty and bewitching aesthetic grace unfolds most efficiently. For the pleasantly powerful singer Leeni-Maria knows to stamp on the song attacks of Kivimetsän Druidi with her voluminously varied organ again all sorts of sonic pleasures.

Therefore the band, also currently immensely idealistic on the iron ball, can not only hurl a worthy successor to the 2008 album predecessor „Shadowheart“, but also put a lot of new surprising accents.

In the midst of a sweeping medieval character, the regularly opulently orchestrated fighter compositions on „Betrayal, Justice, Revenge“ quickly put one in a completely removal-mood from the modern world. I talk again to singer Leeni-Maria. 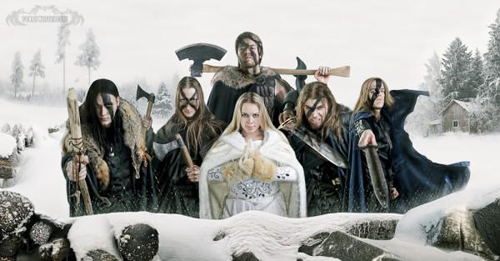 How are you doing currently?

„Quite well, thank you!“

How is to imagine an perfect day for you?

Please tell about the songwriting process for the new album output of Kivimetsän Druidi!

„Influences do not differ from what they were before, but our music has been steadily going into more aggressive and rough direction and that is what has been happening here. Our debut album has songs over many years, some of them from the very beginning of the band, very melodic, fantasy-like stuff. Melodic fantasy is still there but not as dominant as before, since the aggressive elements have risen much higher and the contrasts in our music are growing wider. Most of the song material still came from Koskinen Bros., but there are also couple of songs originated from other members- Atte and Rinksa- and that is kinda new.“

Any changes in the new material, which will surprise the listeners? I've heard even some new Thrash-influences...

„There's really not going to be that unexpected "changes", since we have had those kind of elements before in songs like "Blacksmith", "Korpin Laulu" and "Halls Of Shadowheart". We are just going to lean slightly more into that direction, perhaps especially with Thrash elements, not that much black-metallish. Except for one song. Which is quite black. I suppose.“ 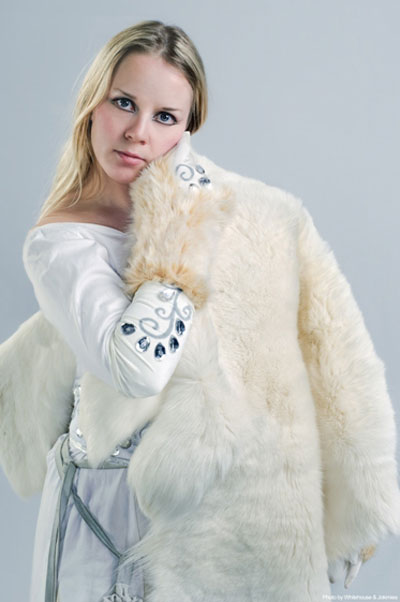 Where Kivimetsän Druidi got all the creative ideas for these new songs and when do they usually come out best?

„We have way too wild imaginations. Don't know about Joni, but personally, mostly my own ideas come when I'm feeling anxiety or even depressed to the limits about something. Mostly, everything cause I'm a little funny that way. And there has to be peace! A chance to slow down and think, I mean. Which is not that common these days. I think we all could create much better if there wasn't the two thousand other things we have to do. Like work, for an example.“

Please bring the meaning of the new frontcover artwork by Jan Yrlund a bit closer!

„Meaning is "Aesis Lilim", the first track of the new album. She is Aesis of the Lilim, or Aesis Lilim for short, and the castle behind her is where her kind, the Lilim, live. They are a people of female warriors, mercenaries, impartial, independent. They live as a community and travel as individuals following their own conscience.“

„"Betrayal, Justice, Revenge" was originally, in part, thought as the name of the one track now called simply "Of Betrayal". We didn't want to make a title song out of it so we decided to shorten it down, and then again to take some other elements into the album title which all occur on the album. "Seawitch And The Sorcerer", for an example, tells - among other things - of people's sense of justice, which may sometimes be falsely based and supported by self-centered, over-idealistic ideas. "Desolation: White Wolf", and "Of Betrayal", have a strong element of vengeance in them - there you have it. Which takes us to the next question.“

More to report about the main lyrical content of the new album?

„As I referred above, on this album there are actually several little stories happening, seemingly separated from one another. They all still happen in the same world we have described in songs before.“

Why you still do this music at all and which is nowadays the most inner driving force within your creative heart to do such music and vocals?

„Again, too wild an imagination. Sometimes so much so that it actually is difficult to concentrate on things happening on this side of the existence.“

How ran the studio recordings for the new album of Kivimetsän Druidi?

„It was quite nice and comfortable. The studio was in Kouvola, only about one hundred meters from Antti's (keyboards) place. Everybody could get there whenever they wanted, there was drinking, randomly sleeping over on the couches, people coming and going and making suggestions and saying there opinions. Jani and Aki, the studio masters, were very much involved with the making, wholeheartedly. Aki is actually on co-producer status, he can be blamed for much that's happening with the female vocals.“ 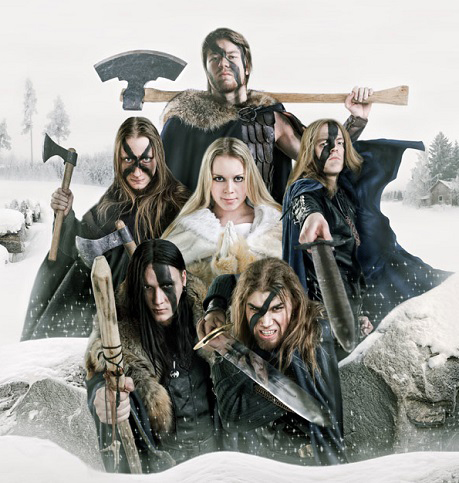 Do you still like it to perform on stages?

„Yeah! Why not? (at least when everything goes more or less smoothly..) Live playing is really cool, and it is going to be center of the "business" in the future, I think, now that record industry has changed into more virtual form. It is the hands-on- part of this work.“

What is your preferred typical Finnish traditional meal and distillery?

„Salmon. Especially in the raw, salted form. Works also without the salt, same way as in some sushi bits. And - gasp!- home made beer! My mom makes lovely beer. "Vaarinkalja". "Grandpa's Beer", that is.“

When you`re looking back in the beginnings of Kivimetsän Druidi - have your musical ‚dreams‘ mostly fulfilled to date?

With which expectation(s) do you looking forward to the upcoming way of the band in 2010?

„The year looks like it might become pretty normal one in the book of this band. Release an album, go play live, go make a tour (hopefully).“

We are really looking forward to see how it is received…“

What's your personal current opinion about the Metal scene in your country Finland?

„I am not really up to date since I don't get to consume music at all - I'm too busy! But mostly I think the Metal scene is big and doing extremely well for such a small country, which is how it has been for quite a while.“