By means of breathtaking fast rhythmic outbreaks, heavy assaults rattle here only so much. The charming, feminine soprano of the blond fairy singer Leeni-Maria Hovila has a pleasantly balancing effect. The raw heathen Metal force of Thyrfing, the monumental bombast of Turisas, crossed with Battlelore in an untamed rage of speed: it could be best explained to the genre-fans what is driven here.

Anyway, these fit Finns, along with all their varied and humorous Fantasy Folk Metal creations, are already highly theatrical, making the listening of their aesthetic mystic songs a highly dramatic experience. 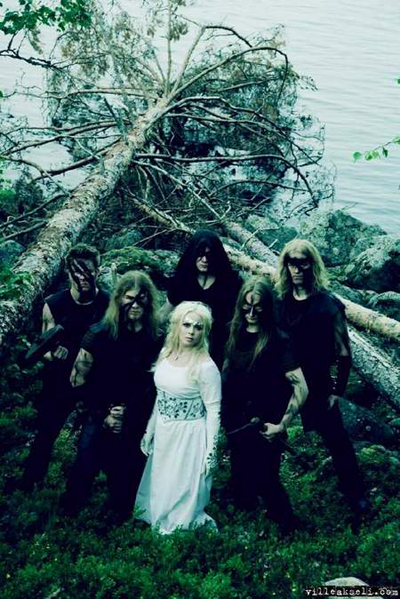 Raised by the two brothers Koskinen in the year 2002, the six-piece squad plays already in the first league, as far as the playfulness of their highly epic performances is concerned.

And after the first three demo efforts „Taival“, „Mustan Valtikan Aika“ and „The New Chapter“, besides a myriad of enthusiastic listeners' reactions, a great media success was achieved, an established major label was found recently for a music-compatible collaboration.

The signs could not stand better at the moment therefore for the destiny of Kivimetsän Druidi.

Please report a ´bit about yourself and your current situation in life!

„I'm a crossover-soprano trying to stay active in both Metal- and classic music. I live in Helsinki with my guitarist-bass player- guy O-P (bands Dauntless & Koruton). I do mixed jobs to pay the rent while singing. Sometimes I go see my brother downtown, or my friends further away from Helsinki. Right now I'm waiting for my folks to visit.”

What do you think of your previous life?

„Much of my previous life I spent looking for myself from different places until I realized I should look within. I spent many years in different jobs and stuff, until I accepted that whatever the result, music must come first though it has its risks. I was taught to study and hold down a "decent" job, but this almost led to self suffocation because I wouldn't allow myself to do what I really wanted to.”

„Referring to the above, finding and becoming what it is I want to be- allowing myself to be what I actually already am. Hoping to tell others to do the same. And maybe making the world a better place in the process.” 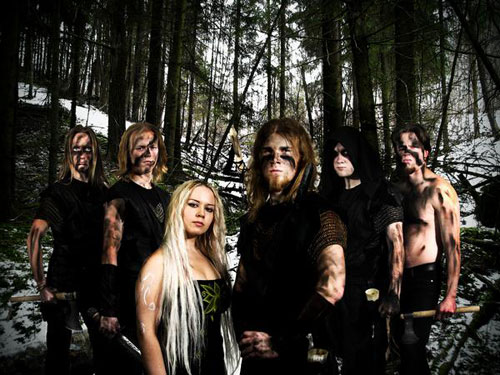 „I can see and hear reasons why one would think so, definitely. But I also see many differences. We are influenced by many different kinds of sources, Finntroll-ish style being only one of them. And after all them, the result is still quite genuinely us.”

„Versatility, I should hope. And certain professionalism, at least striving so: I do not wish to be distracted by the side affects of partying, sponsors, interviews and stuff: I wish to stay concentrated to my actual duty at hand.”

Please give examples of ideas you've had or implemented for the new music of Kivimetsän Druidi!

„My vocal area and differences in this considering Annika and Jenni – our previous singer – is going to take toll on the new songs- I am a way higher and slightly more "classic" voice. This is going to be heard when I get to make vocals for the new material. It has also led to some pretty serious troubles with older, low-register songs like Kristallivuoren Maa and Pohjoinen Mahti. I've had great difficulties singing them live, 'cause I just don't want to change the vocals made by Annika and Jenni – it would have changed the spirit of the songs and I didn't want that. I also have some strong ideas considering outer appearance, I hope to have some effect on stuff like clothing and stage props and stuff, and I hope my history of music theatre schooling may come handy as well.”

What are you most proud of at all? 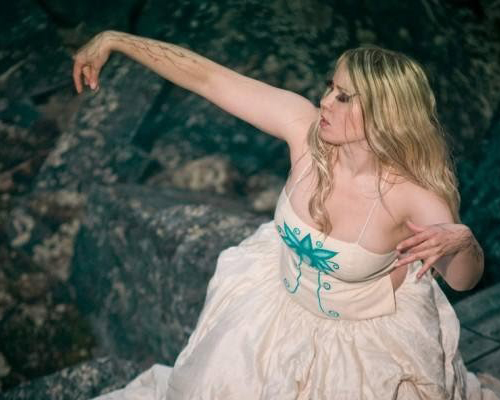 „At the moment, actually, my proudest moment is not about me or the band at all: right now I am proud of my father, a 65-year-old retired organ player. He just went into the first audition of his life today and is now a candidate for a Christian musical role of Judas.” (…)

Who are your favourite bands and why? And who are your heroes among them?

„Swallow The Sun, because it has great hypnotic power: I value their music higher than Type O or Opeth. All the guys are great but Juha Raivio, who mostly composes the songs, would be my hero: he is a wonderful song maker and wonderful and modest person- and doesn't drink at all, which is pretty rare in the business. Also, though this is very new- I just saw him the other day in St Petersburg- Roman Rain was there at the same festival with my former band Exsecratus, and he was amazing. He was actually even stronger live than recorded. His show had not one single weak moment. Afterwards he came to the audience, wrote autographs and posed for pictures with fans and seemed in any way a great yet modest person, which I value very high. You just see too many assholes in the business, sadly, people who live off malicious delight and boost their own poor self confidence by bad-mouthing others. I like to think that personalities like that won't ultimately get very far: it's only so far you get with bad attitude 'cause ultimately other people won't want to work with you.”

Why do you make this kind of pagan Metal music?

„It is proud – in the good way, I hope, 'cause we still want to keep healthy humbleness to the art and colleagues as well- and strong style of music, both cheery to the point of silliness and sometimes quite sad, and still humorous. This sub-genre divides opinions very strongly, the music must be unconditional in a way, properly pushed to the limits of being irritating, if you know what I mean? Humor is very important to keep along, to be ready to push to the limits of ridiculousness and almost beyond and to the top of it do this with healthy pride.”

What do you think about shabby music-industry itself? 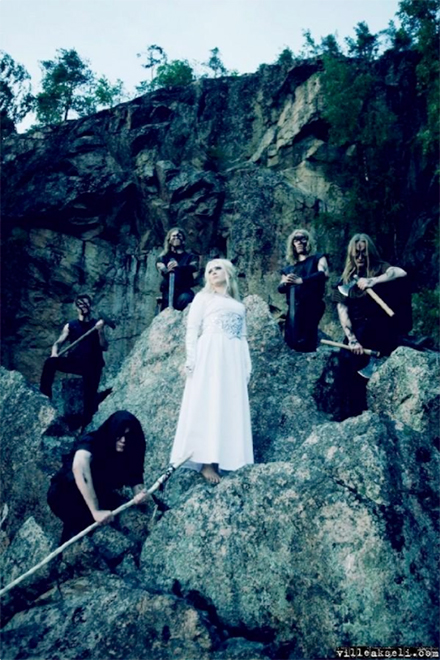 „I really don't know enough of the business in general to answer that. It doesn't seem "shabby", rather pretty strict and rigid, following it's own rules. It saddens be sometimes that there doesn't seem to be this unity among music-makers that might make things easier: we've talked at home for an example about the fact that no one pays new bands for performing, which I think is in part because the young bands do not demand to be paid in unison. If one group says that no, we won't perform for free, we want a modest compensation, the host can always find someone else who will. If everyone decided together that our work is not for free, I think the situation for all musicians would improve greatly. But then there are ideas like "we don't want to put price on our music, we rather play for free" which is noble in it's way and sounds so, but wouldn't you even want to put price on your time spent for the show, your car and gasoline to get to the spot, your gear, instruments, stuff that we all know costs us regardless to the "spirit of the art"! I think young bands should be more demanding, more aware of their rights, which is another flaw: there actually are, at least in Finland, many different kinds of support systems where you can turn to but no one knows about them.”

What are you looking for in terms of development of your musical style?

Why should listeners buy the new album CD of Kivimetsän Druidi?

„Hmm, because it is our first, and we're going to make more, and this one is probably going to come in pretty small selling quantities, and then one day when we are really big and you want to have all our records you won't find an original "Shadowheart" anymore and you'll be really sorry. [giggles] No, really. It is a pretty good album, actually. First of ours that combines old "classics" with some really new material.” What can you do for the fans with your music that other candidates can't?

„Hmm, my English wants to fail me… I am regrettably easy to upset, it is way too easy to make me doubt myself, and I go into this.. state where I way too easily forget what is actually important and get swallowed into this unhealthy self consciousness where my ego overcomes my soul, if you know what I mean: trivial and superficial things upset me and I fall into self loathing and -pity. And loose sight of the path I want to follow. I wish I could become more secure of myself and the important things of my life, or at least more aware of my so-called "demons" so I'd recognize better these moods when they come. This has actually improved already, I am far more secure now than I was some years ago. This probably also relates to your questions of life above, as well as to the fact that I am some years older than the other guys of Kivimetsän Druidi though we are now, so to say, in the same boat: there's now way in nine hells that I would have been ready to do something like this some years back, when I was the same age they are now.”