An exceptionally weightful and damn coarse impacting chunk has become their debut album „Memoirs Of A Murderer“.

Typical raw and brutal for King 810 from Flint, Michigan, which turn out of their time as one of the most genuinely and ruthless Metalcore newcomers. In contrast to many completely imaginary contents of similar combos King 810‘s high-intensity work can disturb as a direct flashback of real life.

Poetic vocalist David Gunn and his acherontic guys preach a 100 % realistic brute gospel of rebellion. That one as a Metal formation comes out of the most dangerous and most desperate cities of the entire globe, conditions as appropriate. Singer and chief David Gunn has the word. 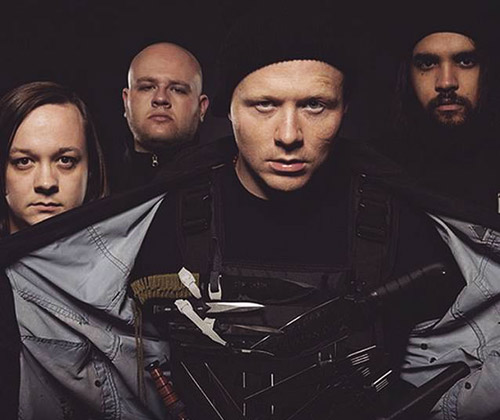 „King means between Queen and Prince we are in very good company. 810 is our area code for the home team who we‘re gunnin' for.“

Flint got the bad name „Murder City … how do you guys feel with the daily horror of violence and other extreme dangers there?

„You feel differently day to day about the horror of violence and other extreme dangers. Sometimes those things are completely absent sometimes they're so heavy you can’t even walk around with them. But everytime you deal with something like that it becomes easier for the next time. So rather than a tough guy depiction its more a de-sensitization case and it’s something that’s hard to understand if you aren’t a part of it. A gun doesn’t make my heart race; a gunshot doesn’t make me jump; a dead body doesnt ruin my day; a dangerous situation doesn’t make me sweat so it’s a subjective angle that might not be understood but it’s a very real perspective you can’t get in a lot of places and that’s why it feels the way it does. And what better capacity to convey this story than heavy music. But at the end of the day I feel like it’s an age old sociological discussion. One in which those doing the discussing usually have never been here, won’t ever come here and won’t ever know what it’s like to come out of here and that’s why they can’t deliver what we’re delivering. And on top of not being able to deliver it they have also made it obvious they can’t comprehend it either.“

Which way did the industry ruin these city mainly? And why did General Motors left Flint?

„There are several reasons why General Motors left Flint. The point is that pulling 80,000 jobs from a city with only 150,000 people at that time is devastating. Thats the time frame we grew up in. No matter what happens to Flint if it does a complete 180 or it continues to fall apart eventually turning into a ghost town we still came up in the midst of a struggle the city was having as a city and the struggle the people were going through to get by. That will never change, that’s our story.“ 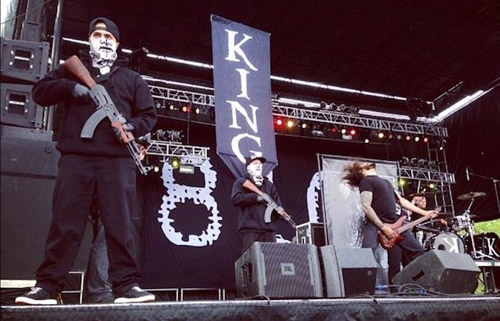 Did you or other guys of King 810 ever got in extreme dangerous situations personally through criminal(s)? If yes, what happened and how did it end?

„Of course. I’m not going to describe anything in detail other than via our songs. But we’ve been in countless situations that could’ve resulted in death or spending the rest of our lives in a cage. Some of those stories are on the record and they are all non-fiction. There is no sensationalizing or glamorizing or fictional add ons it’s all real people places. It’s a memoir just as the title says and it’s unreal stories from a very unreal place. This is art we’re creating but in the sense that we’ve found the ability to convey all these happenings in musical form not in the sense that its metaphorical, vague poetically recited fiction stories for interpretation. So if you want to hear the tales buy the record.“

Own made extreme music is a very good way to deal with such sad circumstances, isn't?

„That’s the age old adage that music is an outlet but that isn’t the case for me personally. I don’t do well with vices. I’ve never done a drug nor took a drink of alcohol and music is not some alternative to that high. I’ve said before and believe that anyone who creates art as a form of therapy is lost and doing the art world an injustice. Anyone who creates art as therapy and sells it is selfish. All of this undermines the true artist.“ 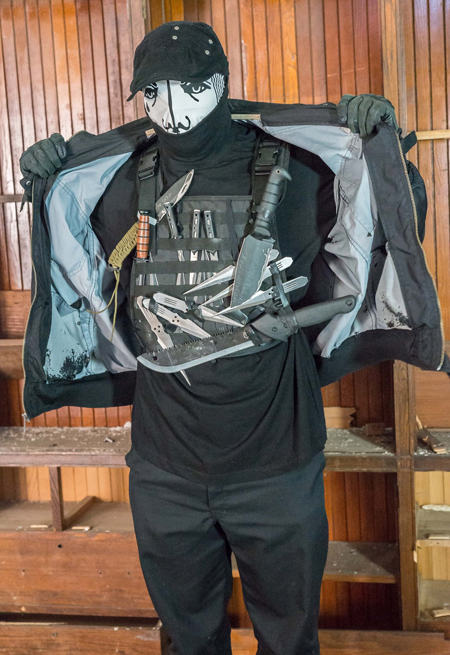 What counts most for you in making music with King 810? Working down your aggressions?

„I’m a writer and a story teller first and foremost and that’s my concern. I want to tell stories the best I can to the people that want to hear them.“

Please describe the main musical character of the upcoming album release! What main content could be named the 'soul' of the album?

„The soul of this record is etheric and dynamic. The main content of the disc isn’t only the hard hitting, aggressive material everyone believes it to be. Of course the aggressive stuff is present and it’s a big variable in our equation and it will always be a part of who I am. However, there is more to this project than that. The underlying theme to this record is "love" whether that’s conveyed through the first lines of the record in a track called "Killem All” ("put your back against the wall ready your weapons/tonight they try to kill us all but we won’t let them") in the form of a comradely brotherhood love. Or in a more typical male/female capacity in a track called “Boogeymen”(“I thought i smelled your scent today/ and it took me on a ride i can’t readily explain/I couldn’t find a word to say/I just froze there in place and my body shot a million ways"). Or a more humanitarian love that concludes the record with “State Of Nature” ("all I smell is smoke when I step outside and the mountains keep crying cuz we’re burning alive/and the people fight the people like they forgot we were equal.")“

Please tell about the main content - in general – regarding the lyrics! Bad daily life issues out of your region, such as murder, criminals etc.? Survival of the fittest?

„As I said before this is my own memoir. Human beings are one of the most complex machines on earth. This memoir is an attempt at putting my own human experience into words. This being said there are themes of crime, violence, murder etc. and things I've dealt with first hand, and themes of love, conflicts with oneself (i.e., religious or moral). I tried to convey all things felt in this piece and make it a full account. Some might say it leans heavy on the violent side but this story is from a very violent place so it’s appropriate that those things will be present but that’s one side of the die. A lot of "bands" come off as pennies or having two sides to them. Especially heavy groups that have ten or so bland heavy songs on a record and one or two anomaly acoustic tracks. This record is more like a six sided die. The heavy cuts are an equal part of the disc not its primary content.“ 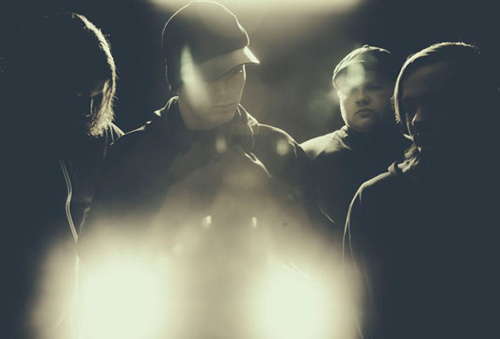 „I think all lyrics are built equal and I don’t enjoy any more than another but some of the most personal or spiritual experiences on the record are the two spoken word pieces. I sit in the booth and let the tape roll with nothing written or thought of and start with a sentence and words just kind of just stream through me for minutes on end until they suddenly stop coming and I understand the piece is done. This is almost a trance induced exercise that I can’t explain in much detail.“

Which (intensive) feelings mainly have dominated your minds during the songwriting?

„I cant even answer that.“

Do you have a personal favorite unto the new songs which you want to bring a bit closer?

„When I’m at home the song I listen to most is called “Devil Don’t Cry". It’s a sad song but it is sonically pleasing.“

„This record essentially took our whole lives right? But the specific timeframe would’ve been from 2009 until now - so a solid five years of writing to complete this bunch of songs. We compose the material. I start by writing the words from front to back and structuring and arranging the song as a song. Then we work from there.“ 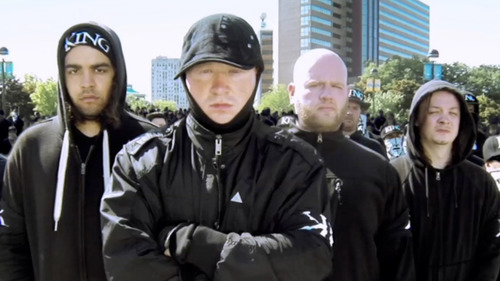 „I’m inspired by everything that happens to or around me. In life. Contemporary music is probably the toughest place to find influence. It’s saturated and diluted with useless, underwhelming works. I’m not a music fanatic who searches for the next thing to get into. I don’t wanna pollute my brain with things people do as a hobby. I’m uninterested in the novelty ipod shuffle generation and music to drive in your car to or music to listen to at the gym, music to party to etc etc. I’m only interested in finding and knowing true artists. The problem with that is most by this time are classic and/or dead whether its in music, book, film or life. The work of true artists share a common thread no matter its appearance visually, its sound sonically or the capacity in which it exists. No matter what particular thing it is that one excels at all true artists share the same journey and they wear it like an invisible suit and it is recognized and understood by other true artists on a non physical plane and you know it when you see them and when you hear their words it’s almost like an understood language amongst us that doesnt translate to the rest of the world.“

To which music do you listen to at home mostly these days?

„In my 4 disc CD player (not an iPod or iTunes) I have the following CDs: India Arie, FKA Twig, Erykah Badu and Meshell Ndegeocello …if that makes sense.“