And for a long time you will not have to recommend Kells' high-intensity music as an insider tip, as the brandnew album „Anachromie“ impressively illustrates.

Already in 2001 the band was lifted into hard life by the still in the same line-up rocking initiators. Now, the changeable quartet has produced songs of extraordinary compositional relevance for its individual melodic crash-discus. The various emotional extremes are reflected by the four as in a kaleidoscope.

One would almost like to imagine the authors with their captivating actions for feeling-chameleons. The sound of the extremely versatile chapel is dominated by the vigorous riffing of string torturer Patrick Garcia and the sweat-driven vocal performance of vocalist Virginie Goncalves: in Kells simply called ‚Virg’, the front woman in the songs of the band caused a lot of sensation.

It is true that this attractive, full-bodied fury almost cries out of her body, but also gently touching articulations of enchanting nature spring from her diverse organ very sovereignly. 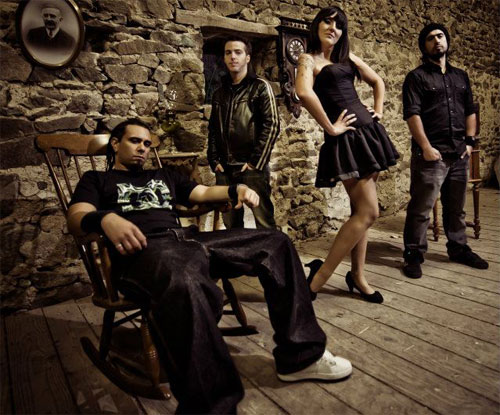 Hey Virg, what is behind the band name Kells?

„When I began composing with Fabrice (ex-keyboarder and co-founder of the band), we did not know that Kells would become a band. At that time, we were only two, and had no specific idea of what would become of the project, we mostly composed as a hobby. When I started looking for a stage name, I wanted a name that could suit both a person and a group of persons, so the idea was to find a name rare enough in France to do so. I searched into a Name dictionary and found out Kells. Beautiful name I had never heard of, and of Irish origins. When I was a teenager, my favorite singer ever was Dolores O’Riordan, so maybe it influenced the choice. Moreover, this name has a History. Kells is an Irish city where a most beautiful early medieval illuminated manuscript containing the gospels was found. Actually, people tend to think we’re a Christian Rock band because of that, but we’re not. We chose this name just because it sounded good!“

From where you`ve got the most productive ideas for Kells’ newest specific modern Metal art?

„We almost all listen to the same kind of music... I like Rock music, Djent Metal, Metalcore, Nu Metal, Pop... Pat is really open-minded, he listens to a wide range of music from Metal, Rock (At The Drive-In, Phoenix…) to Funk music with a brass ensemble! Lo is fond of Metal, Dubstep and Electro, and Ju listens to many different things as well, he likes Rock, Funk, Reggae, African music, Jazz… Our influences for Kells come from various musical horizons, that’s what we like in music, as far as you stay coherent in the creation process, it works! For this album, we had a lot of inspiration and everything came very naturally. We did not limit ourselves in the writing process, and this allowed us to explore various tones. In the previous albums, we kind of restrained ourselves when we composed because in Kells, we have always mixed the ideas of each members and we were not all in the same musical direction before Julien joined. That’s why ‚Anachromie‘ is stronger, because we’re all tending to the same direction, and creating a kind of unity. But that’s just the beginning, because the more we work together, the more we create a style that is just us.“ 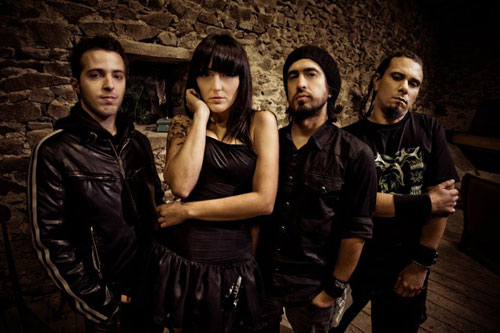 At which moments do you get the very best ideas?

„Kells is a full part of our lives and it never leaves us, so the music contains all our feelings and emotions… Compositions come to Patrick and I, everywhere, anytime… While sleeping, driving, working… Sometimes, Patrick has to fight against his own memory not to forget his ideas until he comes back home, and record them on the computer, while I just have to take a pen and paper!“

What do you think about todays genre-bands which do mostly anything - even change the style of music - just to get popular?

„The music industry is so hard those days, it is so difficult to earn a living on music, that I might understand why some bands choose to abandon what they really like to be able to eat. Others do it just for fame, whatever the music, all they want is getting ‚famous‘, that kind of people, are just interested in themselves, do not feel the music as a passion deep within their souls… That’s something I would not be up to… I wouldn’t do so much sacrifices for something I’m not proud of and something that isn’t me, even though I’d never get rich. That’s not the point. Kells and I, we’re playing music because it’s just as vital as breathing, because we have feelings and emotions to express, no matter if we don’t ever earn anything.“

What do you think, why so few bands can play really good, ‚modern‘ Metal today? Is it a question of the broad range of inner views and feelings?

„There are plenty of good modern Metal bands, the thing is that sometimes, people tend to forget them. Those last 2 years, the Metal fashions were not turned towards this genre… I think it is like in any other subgenre, you have good and bad bands…“

Which is your preferred kind of music at home?

„To be honest, we’ve been working so hard those last 2 years on the ‚Anachromie‘ album that I had little time to listen to music… But when I have, I’m glad to discover new bands Patrick finds on the internet. Recently, we have been listening to many Djent Metal bands, and that’s a genre we’re fond of. I also happen to listen to absolutely no-Metal music, because of my daughter ! (Laughing)“ 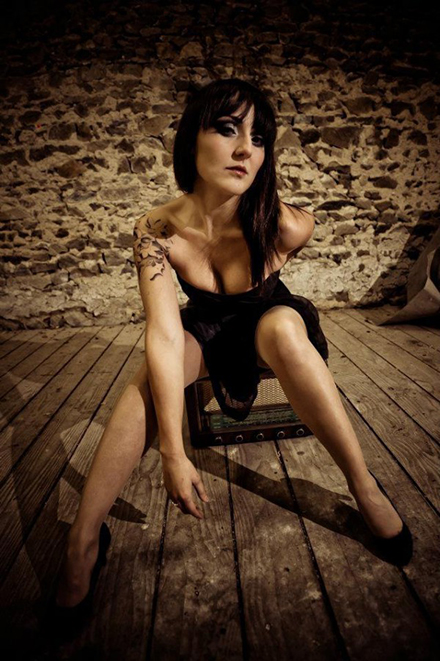 Kells play partly brutal music … btw, brutal: do you take care about TV, Radio and Newspapers at all – with all their targeted cruel ‚Breaking News‘? One should avoid them all as much as possible!

„I don’t watch TV very often , but when I do so, I unhappily can’t miss the sordid news that pollute our screens, and somehow it is a source of inspiration for me. For example, I wrote "Emmurés" ("immured") thinking of the people that disappear and you never ever see again. "Le Manège Déchanté" ("The disenchanted merry-go-round") is about the pedophilia. I had heard on the TV news, just before I wrote the lyrics that a father had raped his child. It is something horrible which shocked me a lot being myself a mother and since the instrumental parts of this song emanated something unhealthy, I wrote about that. I tried to understand the mechanism of these deviant persons, and in the text, the pedophile is speaking. We can see everything through his eyes. We understand globally as in the movie "The Cell" that, in the case of the pedophile I depict, it is an unconscious pulsion which both satisfies and disgusts him: "the desire’s eating me away, the offense is rumbling, in spite of the disgust assailing me". But nothing can change it, even though he is conscious that what he makes is bad, he falls again again and again into the same perverse game: "in its round, I succumb to the disenchanted merry-go-round". And moreover, when I watch the news, the sexual deviants always end-up committing a repeat offense…“

Please bring the lyrical main contents of your new creations a bit closer!

„In this album, I deal with many different themes: mirages (“Illusion D’une Aire”), conflicting relations (“Se Taire”, “Nuances”, “Addictions”, “L’autre Rive”), alcoholism (“Quelque Part”), psychological confinement (“Bleu”), my car accident (“L’asphalte”, “L’heure Que Le Temps Va Figer”), pedophilia (“Le Manège Déchanté”), unsolved disappearances (“Emmurés”), loss of dearest ones (“Cristal”, “L’écho”) … But what makes the coherence of ‚Anachromie‘ is that everything is written in a disjointed way, the space-time notion is broken, the reality mixes up with the dream, as in the surrealist genre... Globally, the lyrics are anachronistic. Also, I use many adjectives of color (ochre, silver, gold, amaranth, blue, white, black, saffron, amber, sapphire, sandy…), which gives the lyrics a very pictorial aspect. It is the mixture of these 2 concepts, the chromia and the anachronism, that gave birth to ‚Anachromie‘.“

Who is the main songwriter in the band?

„Generally, it all begins with a guitar riff of Patrick, a chord suite, or ideas of a chorus, and if it inspires me for the vocals, we present it to the other members and we arrange it all together.“

Who is the main lyricist in Kells?

„I have been handling the lyrics from the very beginning, and we all like it this way. The guys enjoy what I write and they don’t feel like writing themselves. Moreover, I don’t know if my performance would be as convincing if it was not something I felt myself…“ 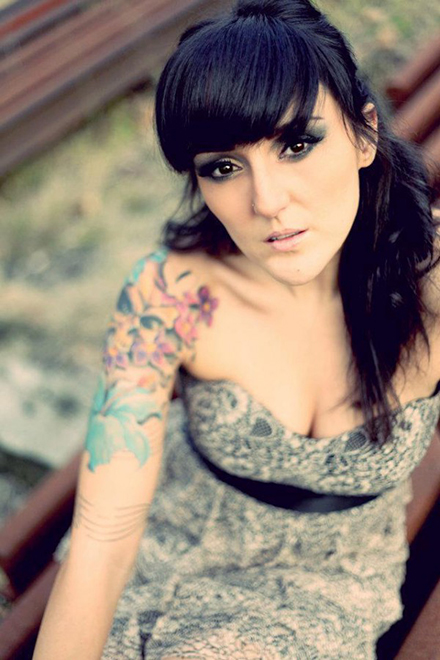 In which age have you discovered the grand meaning of (extreme) music for yourself?

„As a teenager, I was fond of Pop Rock bands such as The Cardigans, Skunk Anansie, K’s Choice, Alanis Morisette, The Cranberries, and when I met Patrick, he lent me his Metal Cd’s that could be easily accessible to the new metal listener I was, Him, Korn, Papa Roach, Taproot, Guano Apes, Deftones, and I fell in love with the genre… As years passed my tastes got used to more violent music, but whatever, I still have a huge preference for compositions with groovy rhythms and melodies.“

What was your biggest moment with Kells so far?

„There are so many! But I’m thinking of the shows we performed with Epica in Poland. The audience was so excited, it was so great, that I improvised my very first stage diving, it was pretty intense!“

What is your favorite hobby besides the music?

„My passion is the tattoo art. I could spend hours daydreaming on tattoo pics. My favourite artists are Oliver from Glamort Tattoo Parlor (CA) and Franck from Crazy Gang (FR). I’m currently getting my whole sleeve inked by Franck, and there’s only one sequence left before it’s done. I’m already working on another tattoo project with Glamort, really, it’s a passion, I’m a tattoo-addict!“

Why you do this at all, and which is still the most inner driving force within your creative heart to create such modern Metal music?

„I don’t know what fuels us, passion has its own secrets. It’s something unexplainable, all we know is that our lives would be incomplete without music, that we feel good when we meet together during the rehearsals, when we start to play, and we feel even better on stage when we see the fans happy with our communicative well-being, it’s hard to explain…“

With which expectation(s) do you looking forward to 2012?

„We hope that ‚Anachromie‘ will seduce Europe, because if it works there, it could also be released in the USA. We wish to tour everywhere of course, and the dream is to headline our own!“

Here you have the place for some additional words to your listeners and fans!

„We would like to thank you for your interest, your readers for their curiosity and reading this interview, our sponsors, and the fans, for their support ! We wish you all the best!“