With its consuming tragically sounding and gloomily melodic mix out of Metalcore and Industrial sounds, these Frenchmen nested themselves in an entirely own niche.

Their current debut album „Fuseless” unites moreover influences out of Death- and Thrash Metal, which make the quite hard, but also very eventful staccato-disk to a rhythmic always igniting matter. Jenx experimenting simultaneously with much joy on an entire palette of musical possibilities, so the band shows up their creative heads therefore far over of the present unit-pulp.

Bass-player and vocalist Xav reveals some details about his loud rumbling French rhythm-machine. 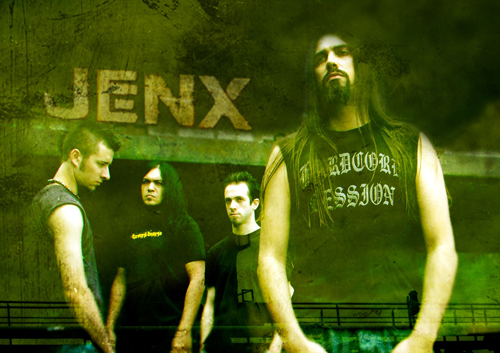 Xav, please tell me a ´bit about the process of the songwriting for the new album „Fuseless“!

„We first released a four track Mini-CD where music was going in different ways and when we started writing the album, we wanted cohesion between tracks without repeating the same song again and again. We wanted the machines to be as important as the voice or the guitars in the melody. We don’t have a cookbook to make our songs. Everybody of us works on guitars riffs, drum patterns as well as loops and modular keyboards and bring it to the others. We listen and work again with the best ideas. Little by little, the songs come to life. We’re particularly unsatisfied persons so sometimes a song can be finish and go to the trash for resurrecting three months later and be resumed to a single guitar riff to start another project. It’s not a quick way of writing but that’s for us the best way we found to validate tracks. When the recording was planned we wanted particular guests and not another well knowned guy in the metal scene. We played once with a French band called Les Tambours Du Bronx and really appreciated their music that is a mix between machines, screams and oil barrels that they hit on stage. When we asked them to play on a song, they were ok with it immediately and send us whole rhythms for the `Unusual` song. That was incredible to hear such additional tribal sounds on our music.”

Which artistic ways do you still seek with your music? Why do you make this kind of music?

„We do this music because it talks to us. We really like Metal stuff and this is amazing to play this kind of music, a unique feeling. Our music is a way to share something with the people, it’s an expression. We don’t wanna be activists or politically involved because for us, music is a way to get away from shit that happens in life, we just wanna share energy that we feel when we play.” 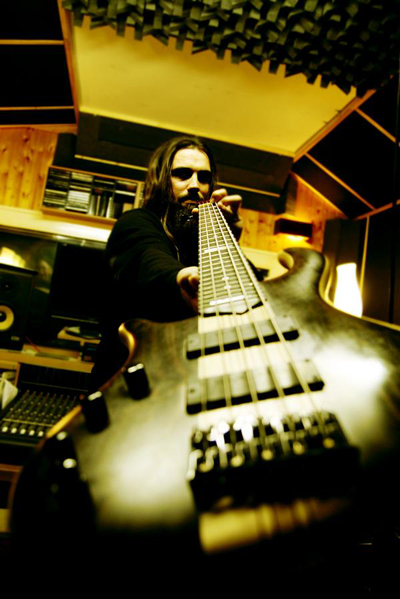 How do you practice your personal relationship to Rock’n’Roll itself day by day?

„It’s our life for years now. Rehearsal, writing, recording, touring, I think we can call it a drug shared by friends. We’re really music addicts, most of us work in music business like music teacher, seller on music shop and at rehearsal places, others got jobs with no connections with music but we live it everyday and it’s our priority. Choices are not easy but when you want something you got to be persevering and know what you want.”

What is the greatest felt fact within all the Metal music at all for you?

„The Metal music is the greatest fact itself, there are so many sub-styles like Industrial, Death, Thrash, Speed, Hardcore, Stoner, Heavy, Black Metal etc. So many to name them all and all the new mixes with other ones. I don’t think there’s another kind of music that has so much direct ramifications.”

Seems, that you guys laid a lot of worth on catchy passages on „Fuseless“.

„Thanx, we like heavy tempos, percussive tribal stuff as well as energetic guitars and tortured loops. I think we managed to get what we wanted for this first album.”

What's your ideal song on the new album „Fuseless“?

„We all got our favourite, `Kira`, `Acht`, `Overlaoded` but every song has his personality. When you finish a new one you always think: `yeah this is definitely another step we’ve been through, this one sounds different`. But the problem is when you think that several times, every song end to become a `Special Song` for you. It’s often after several people talking to us after shows and naming the same four or five songs that we realize that we’re not objective after creating the tracks, rehearsal, recording it and hearing tons of mix versions and production. And at the end, this is the audience that will tell us their ideal song.”

Tell me about your proudest achievement on the new album!

„First the unity between the music, visual and the way it sounds on stage and of course the fact that it’s released worldwide. For a first album, it’s really great that Massacre Records trusted us and allowed this record to be on stores. `Fuseless` is our proudest achievement and we hope you’ll like it.” 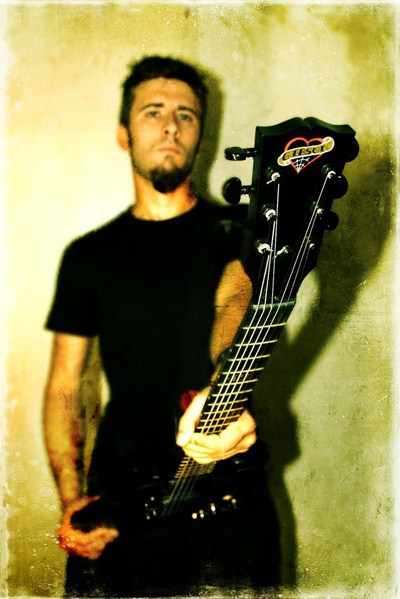 „Every band has his goals, ours is to develop our own style of music, and personality far away from our influences. Not really easy for a first album when magazines, webzines have to put a tag for listeners to have some clues of how it sounds. Hopefully, there are Myspace, Youtube to have some taste of `Fuseless`.”

How big do you ultimately want to become in music-biz?

„As big as it’s possible, isn’t it why we release CDs? I don’t talk about being the biggest rockstar but follow our way up, do our best in composition and live shows, meet new fans in other countries and other bands. Some will said it’s selfish but that’s the totally opposite. We don’t do that to be better than others, just for our pleasure and giving pleasure to Metal fans. Become big in music biz doesn’t means a lot now that you got a new big star every week that doesn’t exist the morning after. The important is how long you can last believing in what you do, that’s the true faith in music.”

How would you describe your working style for your music?

„We work a lot with machines, keyboards, loops etc… and we play Metal stuff so I think Industrial Metal is a correct tag for what we do but feel free to Tag us as you want, this won’t change the songs.” 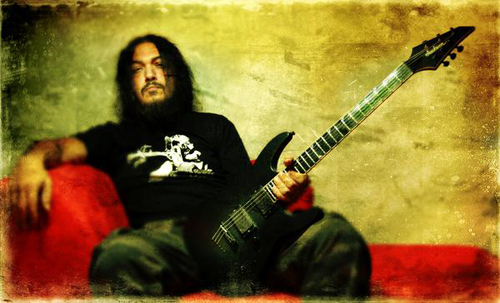 Why should listeners buy your new CD „Fuseless“?

„Firstly because it’s a beautiful piece of work. The layout is by a French artist named EDP Erick D Panavieres who works on our visual from the beginning. We always wanted to release something special with the graphics and booklet of our CDs. When people buy an album it’s not just the music but the artwork that matters too. When you got a band that really pays attention on the images and the presentation of their music, you can be tempted to buy it and not only download it. It’s an object that you wanna hold and keep. Regarding to the music we managed to digest our influences and get something from us, not another x-th copy of a famous band. We can talk a lot about that but you gotta listen to this and make your own opinion. Don’t hesitate to get in touch through myspace of the band website, we always answer.”

What can you do for the fans with your newest music that other candidates out of the genre can't?

„Be ourselves, honest and bring them the best of us. I don’t know what we can do that others don’t, it’s fans reactions that will tell that. We try to give the people a way to escape the daily life as we do when we write a kind of exultory. Music is the cure, no doubt about that.”

„Playing tons of shows and meeting people from everywhere, a long list of CD releases more interesting at each time. And the dream of every band, get your own touch that you can be recognized in the first seconds of hearing one of your song. Sounds perhaps a little strange as wish – but so much of the nowadays bands sound the same way than their idols, that it looks like a luxury to get out of the masses.” 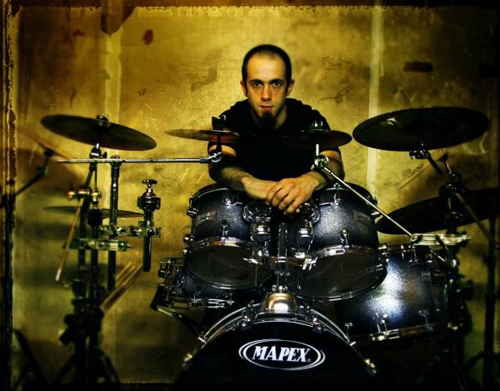 What do you think about music-industry itself?

„Just few words about `Popstars` or `American Idol`, cause this is the shitty plans of majors on daylight. Using people credibility to make them become a `One-Use-throwable-illusion-star`, buying the single and disappear before the next edition. How can you create artists career in these conditions? How can bands develop a long time evolution? This is bullshit but also looks like a last breath of agony of Majors and an ultimate card to fool people. Faith in music is not Reality TV. They realised that internet transformed the way people listen music. They don’t buy a 33 rpm LP and stare at the huge booklet or cover while playing religiously the music in their room anymore. They got 6.000 songs on their i-pod playing randomly and listen to music everywhere. This doesn’t means that people stop buying, just that they won’t buy without knowing the music and liking the band so much that they will need an object, to keep, not only a virtual file on their harddrive paid 13$ (not really far from buying a real CD). Bands and record companies got to pay attention to the packaging, and you can see that happening in some indie labels that release LPs, with amazing layouts. After the defeat of Radiohead, the latest Nine Inch Nails (Ghosts I-IV) seems to get the answer. You can pre-order on the website, the digital mp3, the CD, the Deluxe or Ultra deluxe version. I know what most would think, `yeah people will download the album and that’s it.` Wrong, the packaging and the object was so great that the ultra limited edition was sold in few hours (750 000$ benefits). Who said it doesn’t pay? Now we’re talking about big bands and it’s not obvious for emerging combos but if you believe in your music, only your perseverance will pay. Remember that 20 years ago bands haven’t such internet media to open their music to the world and were condamned to spread their tapes all over the world. That didn’t stop them. Thanx to you for this interview!”