For their current manifest of tragic the four Swedish philanderer of Isole ventured down more emotional than ever before in the own mental abyss.

Because this ultra-melancholic compositions are gnawing at the hopes of mankind as greedy and severe as completely starved black giant rats on a mouldy Harzer cheese.

But „Born From Shadows“, as the new and fifth album of Isole is entitled, enters into with such a devouring musical beauty of Epic Doom Metal that one can raving almost of an alluring sombre beaming gigantism of grief.

I speak with guitarist and singer Crister Olsson about „Born From Shadows“. 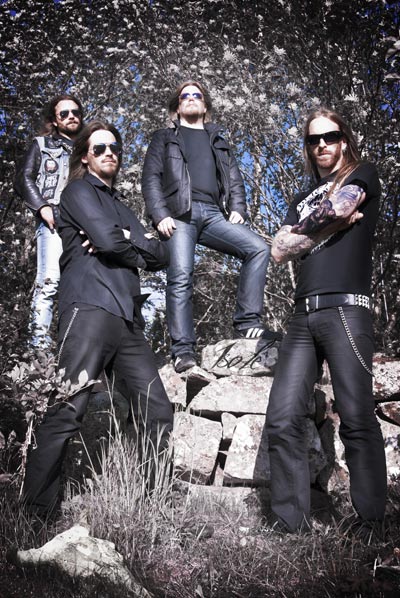 Hello Crister, what's going on in your head, while you think about the new release of your band?

„It’s the darkest pearl ever, I think the songs are better than ever but still as always I’ve got some anxiety about it… Could we have done it better? Perhaps I will have that feeling forever, after every album... The feeling of never getting satisfied enough. Don’t get me wrong, I’m proud of the new album, but the perfectionist in me always shadows my mood.“

The new record „Born From Shadows“ - what can you do for the Doom Metal fans with your upcoming music that other candidates can‘t?

„We can offer a dynamic varied version of dark music, not only for doom-fans because there are other elements in the music as well. The atmospere is the most important ingredience. When it comes to our trademark with dual vocals and always keep something going on in the songs makes the music interesting but you might need to digest the album for some time before you can comprehend what Isole is all about.“

Which is most holy thing for you inside the music of Isole?

„The music will never be happy (not a big fan of happy tunes), other than that nothing is holy, I don’t want any boundaries what so ever when it comes to Isole’s music. As long as it’s good and dark I’m pleased.“

Which are your biggest hopes for the upcoming months, regarding your band?

„To get as many gigs as possible to promote the album, I hope we can get the chance to play some bigger festivals this time. And it’s always interesting to learn what fans and media thinks about it, it’s always a bonus if you can please others than yourself.“

How were the new songs developed until that final result?

„A lot of producing during the recording sessions. To be open and listen to the input from the others within the band. I respect every members opinion!“

What are you still looking for in terms of development of Isole's musical style?

„To destroy all limits and boundaries and continue the path of getting more progressive, not to be afraid to do what please ourselves.“

Please report a bit about the songwriting process of „Born From Shadows“!

„One of us usually come up with an idea for an entire song and present it to the others with a quick recording. Then we run it through the Isole-machine and everyone get there chance to have their input.“ 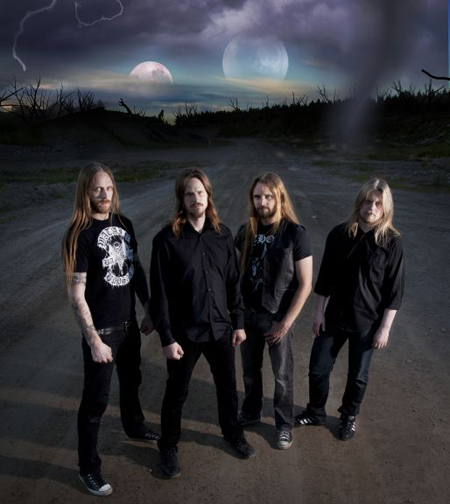 Please tell also about your proudest own achievement on the new album.

„My proudest personal achievement on „Born From Shadows“ is that I’ve composed my best music ever this time. I’ve had a period where my inspiration has thrived in a way I’ve never felt before. I’m also pleased that my guitars solos are improving.“

Which topics get covered with the new lyrics?

„Darkness and despair are common topics for Isole I suppose. Anyway, here’s some examples of the stories on „Born from Shadows“. The title track is a classic story about good versus evil, symbolized by two stones. The „Moonstone“ and the Shadowstone“, it’s inspired by a series of books by a Russian author. Two of the songs „The Lake“ and „My Angel“ are kind of like my autobiography. I wrote about my own life, my past and my future.“

Do you have a personal favorite within the new tracks already?

„The opener „The Lake“ is my personal favourite on this one… I like the lyrics and the switch from old-school Doom with high pitched vocals leading to the Black Metal part… And the progressive part later in the song just before entering the Doomy landscape once again… Variety, dynamic and lots of elements blended in just one song but still the song fit together perfectly into one piece and all make sense.“

Did you ever thought about to quit the band?

„Well, during the mid 90’s we all sort of quit the band, at least the band was in hibernation… But nowadays I can’t imagine a life without Isole.“

To which music do you prefer to listen to at home these days?

„I listen a whole lot Opeth and dark melancholic Swedish music like Paatos, Landberk and Anekdoten.“