„We are now myself (Guitar, Lead & background vocals), Vinnie Angelo (Keyboards, background vocals), Bruno J. Frank (Bass, background vocals) and Krissy Friedrich (Drums, background vocals). But we're planning to hire a lead singer to be able to tour as a 5-piece band. I recorded the lead vocals on the album because I had sung on the demos and everybody encouraged me saying that it was great. Moreover, it was a way to finish the album without having to waste some time looking for a singer. But now, we really need a singer anyway because it would be real hard for me to sing on stage and play my guitar parts - that are often pretty complicated - at the same time and I prefer to find myself in a band situation where I can concentrate more on my guitar playing and on my songwriting.” 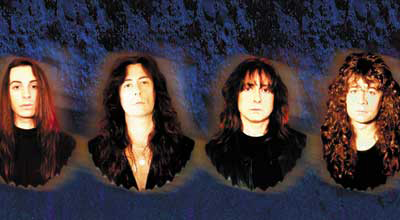 „I know Krissy (drums) for ages, we had already worked together on several projects, we were good friends and we both knew that we could make it together. In 1998, Krissy had just finished building a recording studio in his house and we thought that this would be the way to produce ourselves as a band in complete freedom. That's when we started working for Horizon. You ask me where the band lives and that's the question that has no answer because the band members have different origins, including German, French and Italian, and we don't live together. But it's not a problem today to work with someone who lives far away from you because we have the internet, the telephone and it only takes a few hours every time we want to meet.”

The name of the group stands exactly for what he has to mean:

„Well, first of all, we wanted a name that would not be the average Metal band name because, even if we're all into Heavy Metal music, we all like totally different other styles of music as well and we want to allow ourselves the right to take a walk out of the borders of heavy Metal every time we like, which would be a little bit ridiculous if we were known as Merciless Carnage or Morbid Lobotomy. We also wanted a name that could last and that wouldn't bother us if we still play together in 20 years from now. We chose Horizon because it evokes space, some kind of freedom or the absence of boundaries, because it's easy to remember and also, because it's nearly the same word in many European languages.” 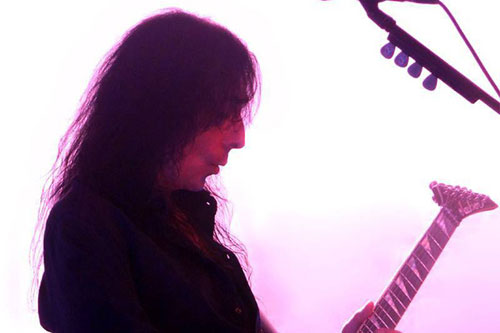 So there may be a relationship of Horizon in musical and lyrical concerns to various bands in Hard Rock and Metal area?

„Of course people will discover some of our influences in our music, just because we grew up listening to the same bands that made the other Metal musicians feel the need to play. But on the other hand, I think that Horizon is unique because we've managed to develop a style that has much more diversity than which you can generally find in the world of Heavy Metal.”

Upcoming live shows already in the pipeline right after the album release?

„No, because we prefer to tour as a five-piece band when we have a new lead singer. It's been planned that we would start working on a new album this spring as soon as `The Sky's The Limit` is released. We're going to try to find the singer we need and record the next album with him. Then we'll be able to go on tour. With a little luck, this may even happen before the release of the second album.”

In which country the band would like to play the most?

„We'd like to play in as many countries as possible but it's true that there's some kind of mythical thing in the fact of touring Japan.”

And the formation does have also an eye for an good organized show: 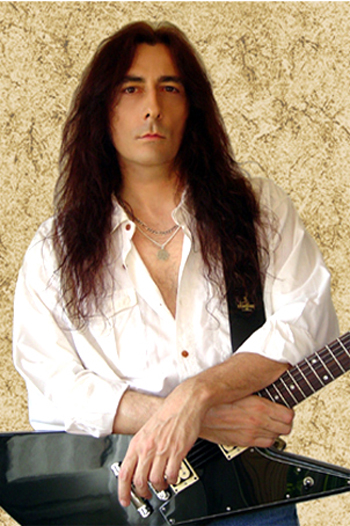 „In Horizon, everybody likes the big light shows, the smoke, the pyrotechnics and all that turns a concert into a real show. We want the fans to get as much with their eyes as they get with their ears because we think that, when someone has paid for a ticket, he, or she, deserves more than just having the right to attend a public rehearsal.”

The title of the new release stands for unlimited ways in life:

„The expression `The Sky's The Limit` means that everything is possible. It's a good way to describe our style as well as our ambition, and it sounds cool when the band's called Horizon.”

„The Sky's The Limit” is not a concept album:

„We just tried to deliver a well-balanced collection of numbers that would embrace the musical tastes we have in common.”

The new album was recorded - and mixed, too - in the personal studio of drummer Krissy.

„Krissy's been working as a sound engineer for years and he's got professional recording facilities at home. We both contributed to the production. As far as the production time is concerned, it's quite impossible to say how long it took because we were all already working separately as professional musicians when we decided to record this album, and since we couldn't stop suddenly all our moneymaking activities, we had to record every time we had some time off over a one year and a half period. And, of course, it wouldn't have taken that much time if we could have dedicated ourselves full-time to Horizon. Some of the material was written just before being recorded, but I had already composed the biggest part of it even before the moment that we decided to do the album.”

Patrick wrote about 90 % of the new album:

„Horizon is a guitar oriented band and that's why the music naturally comes from the guitar player. But Krissy can have some good rhythmic ideas too. And I hope that the rest of the band will have some input in the composition of the next album because this could contribute to broadening our musical vocabulary.”

Who writes most of the lyrics in the band?

„I was the main composer and I was also the singer, so I ended up writing all the lyrics. But, as for the music, I hope that someone else in the band will be able to take part in the writing process in the future.” 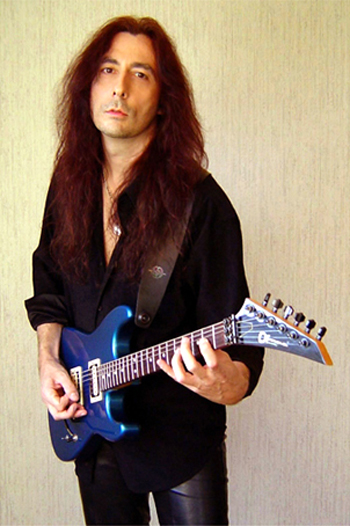 What one important thing reigns in Horizon?

„Music! We don't want to be tagged, and even if we know that a lot of people are going to put a tag on us, we definitely don't wanna do it ourselves.”

Could you please be kind enough to explain the new songs a little bit?

„OK, here we go: `Sunset` (instrumental): The intro for the album. It's exclusively made of guitars. There are up to 15 (if I remember it well) guitars playing at the same time. Very lyrical. Superb. And it launches; `Freedom`: A pretty special song mixing heavy riffs with clean guitar sound passages. Cool drum part; `Living In Danger`: Demonstrates that it's possible to mix classically influenced sections with thrashy riffs and a blues scale based solo without sounding messy; `Keep On Fighting`: A real heavy groove. Great backing vocals. Sounds like Black Sabbath playing over a choir; `Don't Hide In The Shadow`: A 100 % acoustic ballad. Intimate and refreshing at the same time. We wanted to do something different from the traditional hard rock ballad and it seems to be a success because everybody loves this song. I think it's got some kind of class; `Hometown Star`: A 100 % abrasive up tempo number. Right in the nuts!; `Put Your Money Where Your Mouth Is`: A very ambitious number. Could be defined as `Prog-Power-Metal-With-Acoustic-Passages-And-A-Killer-Solo`; `Atlantis` (instrumental): One of Krissy's faves on the album. It goes from thrashy riffs to moody passages. Great solos. Great drum part; `So Long Ago` (instrumental): A sweet interlude that finds its origins in my classical guitar years; `Caught In The Middle`: Bluesy groove with a lot of balls. Bluesy solos with a lot of guts. Does the Blues Metal already exist?; `The End`: A song of hope about death. A superb piano performance and a very long solo. Both poignant and lyrical.”

„We hope to be recognized as a band who's got a personality of its own.”

„We play what we play because we really believe in what we do but nothing is better than knowing that a lot of people have a great time listening to our music. So let us know if you like it, let us know what you like the most about Horizon and we'll always try to give you what you want because it's the public that makes a band exist. We're looking forward to see you on tour as soon as possible.”