What began 1981 fateful in Houston, Texas, indulges the US Power Metal disciples of this world now with a brand new album.

And the current fulmination of notes, titled „This Wicked Nest“ ignites as intensely as strongly as expected.

Superior vocalist James Rivera proves with his strong captivating mastervoice that he has lost not a spark of passion for the progressive music of Helstar until today. The quintet quotes in dynamically fresh and contemporary wise own classics such as „A Distant Thunder“ and „Nosferatu“. At all the enormous invigorating Helstar represent themselves on „This Wicked Nest” with a delightfully huge maturity.

„Pretty much a typical Helstar record with the same heavier more modern feel that we've been introducing into our latest records from recent years. We purposely went back to more of our original musical roots with this album, as I'm sure you've noticed.“ 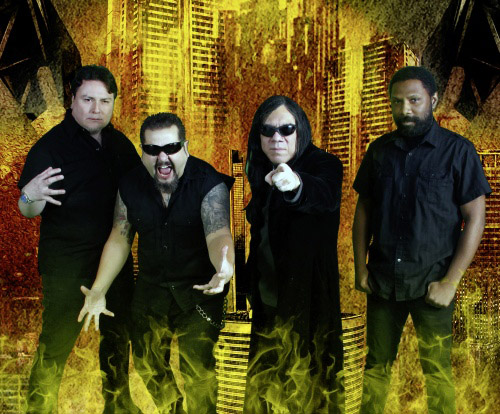 What time engaged the complete songwriting and who were the main composers of these new stuff?

„Well, all four of us (James, Larry, Rob and Mikey) are composers on this album and it took us approximately a year to complete it since I was on tour so much in 2013. So a lot of my writing had to be done in between touring and just before stepping into the studio to record the vocals.“

How deep you're personal into the illustrated conspiracy topic?

„Well, I have always been suspicious of how things run not just in my country or your country, but this whole damn world. And it seems that many of the things that I had foreseen and forethought have all come to light now, unfortunately. But what can we really do? We are all just pawns here on this rotten planet until we move on to a better place, spiritually.“

Please describe what stands behind the album's title. Where is the most wicked „nest“ on earth to your mind?

Please report the readers about the main content in general of the newest Helstar lyrics!

„The majority of it is about points of view of the vast conspiracy theories of this world, which is obviously a big message in the cover artwork, as you stated earlier. On the other hand, there are three other songs - ,Eternal Black‘, ,Souls Cry‘ and ,Cursed‘ - which deal with the unfortunate gift that we don't want, but have to unwrap some day, which is called death. I've always wondered why when you're born it's ,happy birthday‘ and every year sing you that stupid little song. So when we all die, shouldn't we all be singing ,happy death day to you‘? [laughs] Because death is the only promise we are given once we enter this world. Maybe it can't be all that bad?“ 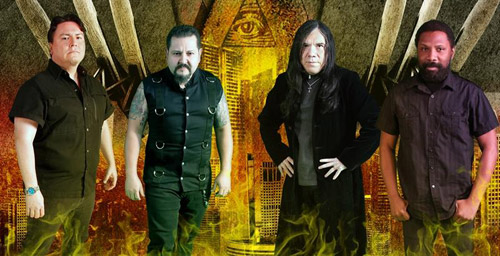 „I know you're going to hate this answer for now but I have to be honest. The album is still growing on me and it's hard to be judgemental of any of the songs because they're all so very strong. My favorite varies from week to week. But, if it were a life or death answer this minute I would have to say right now Fall of Dominion still knocks me out and Souls Cry, since it's based on a personal experience.“

Which are your nowadays special musical and personal (spiritual) influences?

„I used to be able to answer these questions without much thought, but over the years so much has changed. As for musical, my influences and likes are such a broad horizon. These days I listen to anything from smooth jazz to oldies - and I don't mean Heavy Metal oldies, I mean sixties and seventies music. After all, I am a singer, so more melodic songs grab my attention. On the other hand, I'm obviously attracted to Melodic Death and Black Metal artists such as Dark Tranquillity. Personally and spiritually, let's just say I believe in a higher being. That can get too complicated.“

What still counts most for you in making music at all?

Which is your biggest wish for these planet and the predominant anti-social mankind?

„That all of us true and spiritual believers in Heavy Metal can have our own country and government one day. I guarantee we would probably get along just fine and have the best government and way of life that ever existed! I could just see Alice Cooper being our ambassador.“