Here are Zarlack, bass player, drummer and shouter, as well as guitarist and keyboard player Volmorth at the heroic work.

Of martial pompous aura is the atmospheric and melodic Pagan Black Metal of these two Dutchmen on their current debut album „Strijdkracht“.

Together they report the today's world of shabby illusions from the time of glorious being. The Questions are answered by Volmorth.

Please tell your story as artists, as musicians and from where you came! 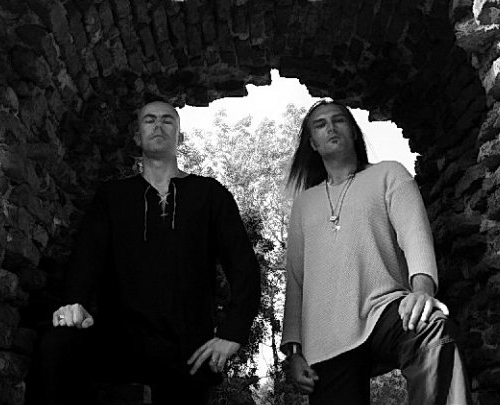 „Hellebaard is founded by Zarlack (bass, drums and vocals), and me (Volmorth, guitars and keyboards) and after five years of performing and recording with our previous band In Ruins. Before In Ruins, I played in several Metal bands, while Zarlack played in Consolation, a well-known Death Metal band back these days. When In Ruins broke up, Zarlack and I decided to start a new band in which we could not only apply our Metal influences, but also our Folk and melodic influences. After founding Hellebaard in 2002, we started to write and record the first Hellebaard songs, and published them online where they generated lots of downloads in a short period of time. This caught the attention of Wandalen, a small German record label. They released our "Wodan's Lof Gewijden" promo in 2003. When Wandalen did quit it's activities, we started searching for a new record label, in the meantime recording our album "Strijdkracht". Several labels were interested, but we chose for CCP Records because they are suited the best to Hellebaard's music and identity.”

„We both are grown up with Metal and like a broad variety of Metal styles, ranging from old-school eighties Metal to brutal Black Metal. Also, we like traditional European Folk music and occasionally some heavy classical music like Wagner. I think you'll hear all of these influences back in our music.“ 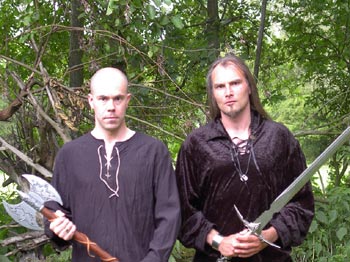 „The album title "Strijdkracht", which is also the title of one of the songs on the album. "Strijdkracht" is the Dutch word for "battle force", meaning the power and strength of an army.”

Which feelings were in your minds during the composing process for the new album?

„Yes, we love our ancient native culture and overwhelming nature. Although our overwhelming nature is declining fast, and is not so overwhelming anymore. Most of the deep inner feelings which have been going through your minds during composing and recording the songs for the new album are excitement, when a new song was finished, and frustration, when technique failed.”

Which lyrical contents contain the new tracks of „Strijdkracht“?

„Our lyrics speak of nature, battle, blood, honour, pride, and remembering our ancestors. Most of the lyrics are written in old Dutch, and based on medieval stories.”

„At the end of this year 2004, we will probably start writing and recording new songs. It took us almost a year to write and record the "Strijdkracht" album, so you can figure out when the next album will be released.”