They love their picturesque homeland Gelderland above all. Therefore streams a truly titanic authenticity from the epic Pagan Folk Metal of these studious Dutch.

Recently the firmly fraternized sextet successfully finalized the works for the new album „Uit Oude Grond“, a throughout homage to old legends, partially also those of Gelderland.

And could Heidevolk made massively points in the rows of the worldwide pagan followers already with the successful predecessor „Walhalla Wacht“, also the current publication will be directed once more by large success.

For this highly eventful warrior disk unites all what desires the Pagan Metal heart, and that in quite extravagant abundance. Cracking igniting composition ideas, entraining rhythms, mightily earthy snatched riffings, thrilling refrains and above all also one: marvelous epic without any false pathos. 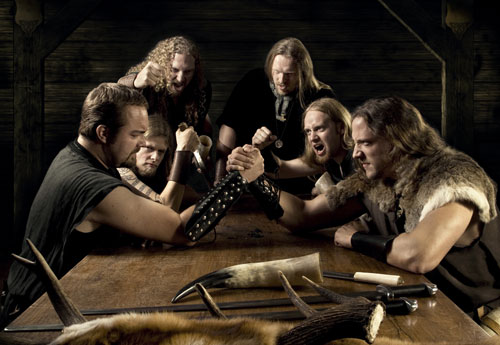 Drinking horn empty? No problem, Heidevolk understand it also in best manner to intoxicate one with its new music.

„Sure, we’re all doing fine and enjoying the calm before the storm! Making preparations for the release party, and ready for the spring and festival season! And how are you?”

Luckily I’m fine at the moment! When you do a critical look on our planet and the current dominating societies, what „modern days urban human robots“ could learn from ancient heathen philosophies and rules in general?

„I’m a bit hesitant to speak of the noble savage. Ancient mythology was of course a product of it’s time and I like to view it in that light. We’re drifting further away from the rural society our ancestors‘ worldview was built around, the world has changed a lot so it’s difficult translating it to the modern age as a whole. I’m not the one to preach nor do I feel the desire to impose anything on society. Let everybody decide for himself what can be learned from the myths and actions of our forefathers. To me personally, reading about it helps me understand where my roots lie, and it gives me a notion of my place and direction in time.“

Please report about the songwriting process for „Uit Oude Grond“! How was developed the new song material and under which influences?

„Some of the songs were written as a group, but this time we also wrote songs in pairs or indvidually. As a result, we have a more diverse collection of songs on this album. I’m confident all of it will immediately be recognizable to those familiar with our earlier works. The topics and inspirations for the songs range from folklore and mythology to history and the cycles of nature. We also included two songs that are directly linked to our province Gelderland.“ 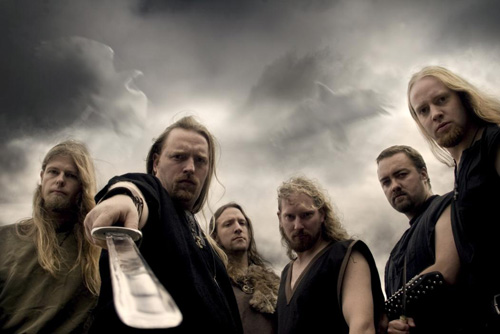 Did you make any changes in the new material, which will surprise the listeners?

„Hehehe, yes we did write a few songs that are unlike any material we wrote before. But rest assured, no techno or any of that! It’s a bit strange because at the same time we also have quite a few very orthodox Heidevolk elements, so I guess you could say we moved in two different directions at the same time.“

Where you`ve got all the creative ideas for the new songs? And when did they come regularly at best in your mind?

„It’s hard to predict when and where inspiration comes, but usually the best ideas pop up during or after a walk in nature, or after reading about historic events. The impressions mould into ideas and lyrics, and that’s when it’s time to start writing! There’s no standard procedure for these things, sometimes somebody plays a cool riff, creates a nice rhythm or comes up with lyrics which can spark ideas.“

Please explain the readers the meaning behind the new frontcover artwork!

„A while ago my girlfriend and I went for a walk in national park De Hoge Veluwe, to the north of Arnhem. I had my camera with me and there was a beautiful sunset. A pair of raven even joined us and I tried really hard to capture the moment with my camera, but the pictures didn’t really reflect the beauty. The experience made a big impact though, and when we needed a cover for the new CD I realized a scene like that sums up what we’re about. There’s the old soil on which we were born and which has set the stage for many historic happenings, there’s nature, there’s mythological references and some more elements. It’s not like we wanted to cram as much symbolism as possible on the cover, but in hindsight all of it was there that moment on the Veluwe. We asked Awik Balaian to make drawings and he immediately captured the atmosphere, we’re very satisfied with his work!“

„From old soil“ refers to the place of origin of the tales we tell, which is north-western Europe and Gelderland in particular. We feel very connected to this area and draw a lot of inspiration from it. We dig for our roots while springing branches into the future with our music, to put it that way. This is also a metaphor that can be found on the album cover.“ 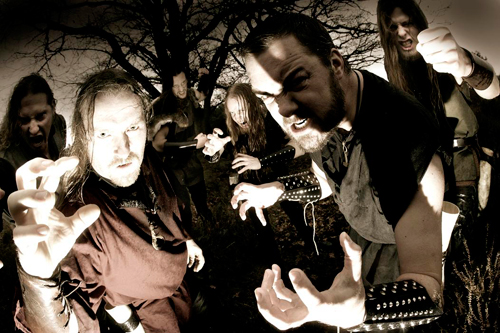 Please tell a bit about the main content of the lyrics of „Uit Oude Grond“!

„It’s really quite diverse! We didn’t set out to create songs centred around one single lyrical theme, and so we ended up with 11 songs about subjects like mythology (Dondergod, Nehalennia), the cycles of nature (Ostara, Deemstering), pagan worldview (Vlammenzee), folklore (Beest bij nacht), and Gelderland (Een Geldersch lied, Karel van Egmond). We included liner notes in English that explain what the songs are about, so you don’t have to take Dutch courses.“

Why you still do this music at all after so many years, and which is also nowadays the most inner driving force within your creative heart?

„It’s the combination of both writing the music and being able to perform it that makes it the ultimate form of expression. Our sources of inspiration are endless and so we continue!“

How did run the studio recordings for these new album?

„We recorded it in 3 weeks, and it went well. Of course there’s always some diificulties and time pressure, but we managed with the help of producer Dick Kemper! The vocals were produced by our live sound engineer Nico Neusbeul, and he played a huge role in improving the way Mark and I sound.“

„Our hunger for the stage can never be satisfied, it feels like a catharsis when we unleash our energy and it’s a great thing to see an audience enjoy itself. It’s simply very addictive.”

„Andijviestamppot with cheese and bacon, and Grolsch. Hands down.“ 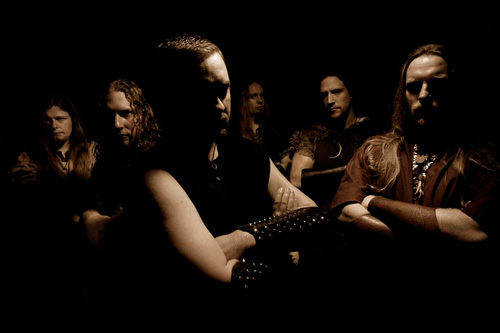 When you`re looking back in the beginnings of Heidevolk – got your musical „dreams“ mostly fulfilled to date?

„The dreams aren’t fullfilled, we’re living the dream, hehe. The line-up at that time had very different ambitions, and today we’re a bit more on the same page about what we want as a band. We still have a lot more subjects we want to sing about, but we’ve come a long way in 7,5 years! I’m very grateful for all the cool memories and experiences we’ve gathered, and that people like our music.“

With which expectation(s) do you look forward to the upcoming way of the band?

„I hope we can keep on doing what we want and what we do best: make music from the heart. We’ve never been very good at long term planning and we take it one album at a time without looking too far ahead.“

What's your personal current view about the Pagan Metal scene in your country?

„I’m not into trolls, humpa and stuff that seems to be all the rage these days and I’m not very up-to-date about what’s happening in the scene. There’s one band I really like and who were one of the first in the Netherlands that started making this kind of music: Grimm. Honest music by some really cool people, and worth checking out!“

Most important goal for Heidevolk in 2010?

„Survive and make it to 2011, hahaha. Seriously, we want to make our shows a success and deliver the new songs the best way we possibly can on stages in Europe. Naturally the cycle starts over again, so I hope we manage to transfer our energy into the creation of new songs once again, soon!“