The soulful mixture of the 2004 founded formation on the seventh album „Skeleton Lake“ combines rugged, scenic naturalness with deep human longing and corresponding profundity. I talk with singer Toni Hatakka.

Congrats - what an emotional & touching return, with so much stunning atmospheres, I love it! How does it feel for you?

„Thanks! For me, this album is the pinnacle of all that I’ve accomplished musically. Furthermore, I got two compositions of my own to make it on the album. ‚Kuura‘ and ‚Winter’s Kiss‘ started out as my compositions, though I think Jussi H. contributed at least half of the final composition and production on both of the songs. But it’s a first time some of my compositions have made it on a Hanging Garden release, and that’s intensely meaningful for me.“ 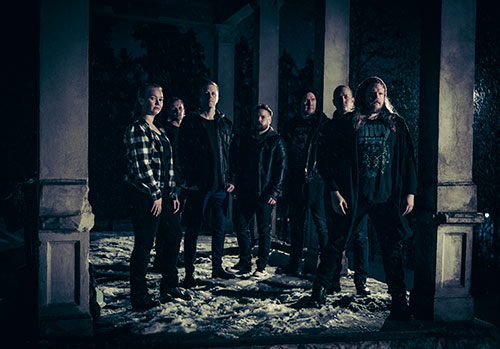 The sound and the arrangements of the album are pretty original - who produced it?

„Our guitarist Jussi Hämäläinen did the production for the album, which was then mixed and mastered by Jarno Hänninen of D-Studio. On ‚Winter’s Kiss‘ I got to work closely together with Jaani Peuhu (Swallow The Sun, Mercury Circle, Iconcrash), who agreed to do the vocal production on the song and oh, what a banger it became! Working with him was bloody awesome. He also sang some very cool harmonies for my vocals on the song.“

For what kind of musical ideals stands „Skeleton Lake“?

„I guess we want to try quite a lot of different things. Many of us compose music so we get quite a lot of songs and we seldom throw anything away. I think it mostly comes to whether we have a consistent enough entity of certain stylistic choices, and if it seems the right time to move forward with certain style of material. This time we incorporated some Black Metal flavour - or at least tried - and even some Gothic Pop elements. The aesthetic strived towards creating an atmosphere of cold northern winter.“

What is the most important fact for you on these new album?

„A vision that I had was to make some more intricate vocal harmonies with our singer Riikka. I think some of them came out quite nice. Take the chorus for ‚Faith‘ or ‚Tunturi‘, for instance.“

It feels excellent for me to listen to the new songs - what kind of emotions dominates the new material?

„I think we managed to portray the cold desolation of a northern wasteland, the hopelessness of the sunless Kaamos time northern Scandinavia, with some glimmers of hope in the form of a warming winter suns first promise of a coming spring. Something along those lines.“

Some Songs, especially „Faith“ remind me strongly about Beseech on their masterpiece „Black Emotions“ - do you know them?

„I'm afraid I haven't gotten the chance to be acquainted with them.“ 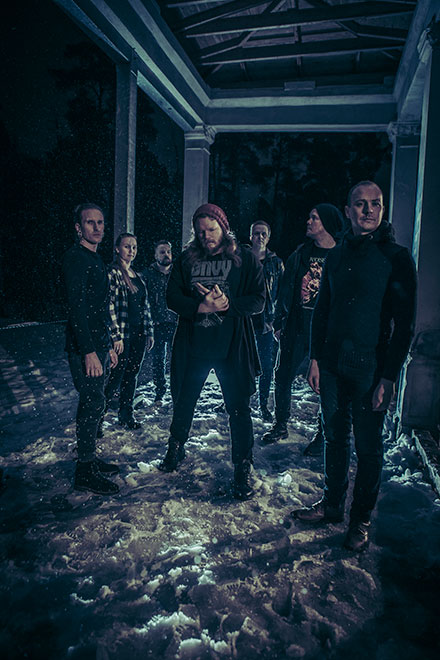 What topics do your new song texts deal with mainly?

„Stories of desolation. The songs are musings about mankind, about ending, death, the future of civilization, about personal struggles, but I don’t think there is a coherent message that the album tries to convey. It is a tribute to nature and its power, at least. It is lamentation. And it is catharsis. ‚Tunturi‘ I wrote as an In Memoriam for a friend and colleague, who passed away last year. The words are simply a farewell to a beloved friend, who departs north, to the fells, rivers and forests, and of reunion when we who were left behind take the same trip ourselves. The words are tender, fragile and beautiful, but I sing them with the ferocity of my mourning.“

Who wrote the lion’s share of the material - and how long was the work in total for all the stuff?

„Jussi Hämäläinen wrote most of the songs. There is one song from Jussi Kirves, one from Mikko Kolari and two from me. The whole writing process spanned somewhere around a year.“

„Actually, we had such an abundance of material, that the hardest part was to choose which songs would fit the album best! It seems there is quite an inexhaustible flow of inspiration from all the members who compose stuff.“

Is it allowed to ask you about any special musical influences which may led to the new material?

„Sure! For me it was the Japanese post-metal band MONO, old Borknagar albums and some Scandinavian Neo-folk. And of course, older Opeth. I think ‚Still Life‘ is kind of reference for me almost always when I’m dabbling with Metal music.“

The band was formed in 2004 - how much are you still interested in the current music world, the Rock and Metal music scene?

„I think many of the band members listen to a lot - if not mostly - stuff other than Metal or Rock. I myself compose video game and sound track music as a freelancer, and tend to listen to a lot of music in those genres. We do, of course also listen to a lot of Metal, and I myself have the regular suspects, like Cult Of Luna, My Dying Bride and At The Gates, which I follow regularly and check their new material diligently. New bands, on the other hand, seem hard to find. I don’t think it’s because there wouldn’t be promising and unique new music, but because there is such a huge variety that it’s hard to find the pearls amidst the mediocrity.“

„Check out the new music videos! They are DYI projects made mostly by me together with Nino (keyboards), Riikka (vocals) and some other people. On the video of ‚Kuura‘ you can see the landscapes through which we trekked in the late autumn last year together with Riikka. Most of the video material is shot in the Kaldoaivi wilderness in the very northernmost Finnish Lapland.“