The year 2008 did experience through the publication of their vigorous debut album „Ynys Mön“ undoubtedly an enormous enrichment. Because the Viking Folk Metal of these ambitioned horde, contoured with opulence atmospherics, brought extremely mighty dynamics forwards.

In addition to that very theatrical at work, technical skilled and equipped with the necessary consciousness for change wealth and tension variety, the fellows hurled a earthy warrior disk of high substance size into the genre tumult.

Established 1995, the strong crasher horde later left three interesting demos to the heathen metallic audience. „Debt To Morrighan“,„First Channeling“ and „Augmentation“ entitled, the berserker horde developed their style therewith more and more to the masculine as orchestrated style which plumbed it in the end best for „Ynys Mön“.

And the smart Portuguese Gwydion were also since then all other as musically idle. Presently they finalize the recordings to its upcoming second studio album, whose roaring unleashment is scheduled between the first and second quarter 2010. 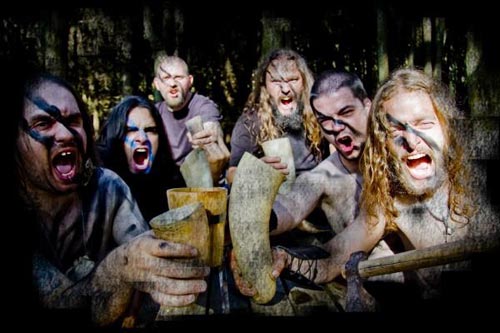 A superior blow into the basics of the genre is to be expected, which will attract the most violent song material.

Why you do this at all – which is the most inner driving force within your creative heart to create such Metal music?

„We like to listen and play Metal music and go out to see concerts and festivals of metal music. We all have day jobs but we feel something inside us very strong who compel us to compose such metal music and play it in live gigs. Besides that, the Portuguese culture has strong elements with pagan and folk elements, most of them brought by Celts and Visigoths and that reflects in the music we create.” Do you have in your home country a dedicated fan-base?

„To be more accurate we have a growing fan base in Portugal, in the last year we did very important shows in our home country and they went so well that people here are seeing us as a much respected band! One important thing is that we are one of the very few bands here that plays this style of music, and it´s good because we are much different than the most bands in Portugal.”

What’s your personal view about the Metal scene in your country? 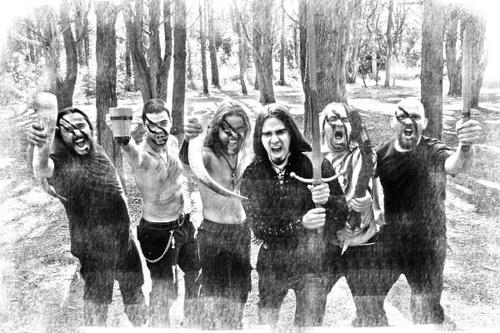 „In Portugal we have a strong underground Metal movement. We do have lots of excellent bands that are waiting for their opportunity to show their work around Europe. Most of them only need a chance to breakthrough in Europe´s Metal scene. About the Metal genres here, we have more Death Metal oriented bands, but there´s also bands on the other Metal genres. Regarding Viking/Folk Metal we don´t have much bands playing that here, so sometimes it´s difficult to play with similar bands like Gwydion.”

How running the recordings so far for the upcoming Gwydion album?

„It´s running well. We are preparing this new album with extreme details, we think people will notice a great step further regarding the previous work, so of course our expectation is much bigger. We are in the recording phase now and we had lots of fun during this process, you can check some of our studio reports on our Myspace page. We are preparing everything with the most detail possible, so get ready for a great album.”

When will we have the new album of your band in our hands? 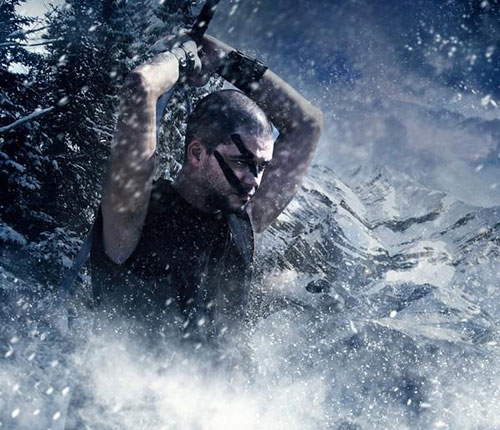 With which expectations do you looking forward to your upcoming release?

„Well, in this album we’re putting all our efforts in to it, song writing, post-production, mastering, album layout, image and promotion. We think that the second album is one of the most important steps in a band’s career. In the first album you start to spread your work, and in the second album is some kind of an affirmation of your music, so … we really hope that this new album goes even more beyond then our first one. After the official release we hope that we can have the opportunity to “Put the Show on the road”, with a good Tour, some festivals and some loose gigs all over Europe! Those are our expectations! If not, we will just keep on trying, battle on!”

Which differences to the previous release are waiting for the listeners?

„Well, the music’s that make part of „Ynys Mön“ are more like a streamlined compilation of what where made at a slow pace during the previous 6 years before being released. It was kind of a chronology showing the musical evolution of the band. We saw that album as an ambiguity because it shows a bit of our older musical history but also shows the direction that we are heading now. Regarding the new work to be released we can say that this album will be close to 100 % what we want it be nowadays, first the production of the album is like from night to day, in this work all is done at professional level that the previous one couldn’t get. And finally the most important the music’s ... grab your mugs, raise your axes and shields, be prepared for an storming journey, we feel that this album will show you the present Gwydion, you can expect a much more gut punching Epic/battle/Viking kind sound while also being able to present you some more festive/folkish melodies. But that we leave it to you, so check it out soon at 2010.” 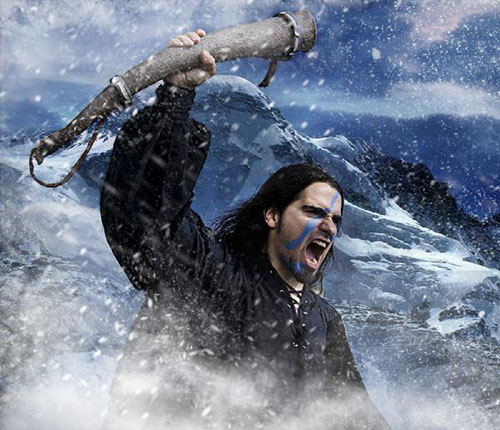 Regarding the accomplished songwriting process: did it run easier or more difficult in comparison to the previous album?

„Definitely, easier, with our current line-up, songs just flew naturally. Recording process has been easier to, we are currently working with Fernando Matias from F.E.V.E.R., and he is doing an amazing job. In the debut album all recording process , post production and mastering has made by Gwydion, artwork all so, it was really hard to do everything at the same time , but now with our producer Fernando Matias, and Jan Yrlund doing all the artwork we can dedicate 100 % to the songs, Now we have more free time to give to details!”

Where you`ve got all the ideas for your specific Metal art? When they come regularly at best in your mind?

„Those images and thoughts are a part of us constantly, in the band it’s a common thing. Our ancestors were Celts, there are trails of Celt mythology every ware, we live near Sintra a very mystical place, a special mountain with a beautiful castle, were battles took place. All so our Portuguese territory was called Ophiussa or Ofiússa that was the ancient name given by the Greeks (People of the Serpents Keepers of the Dragons) they called us. Actually, we have a song in this album called Ophiussa! We are a mix of ancient civilizations like Celts, Barbarians, Saxons, even Vikings were in Portugal … and long after that the Romans. We still have in our blood the same conqueror spirit as the Vikings, proof of that, our Portuguese navigators discover and conquer half the world in their endless journeys! It’s kind of in our adventurous blood to put those ancient roots in our songs and our Metal art.” 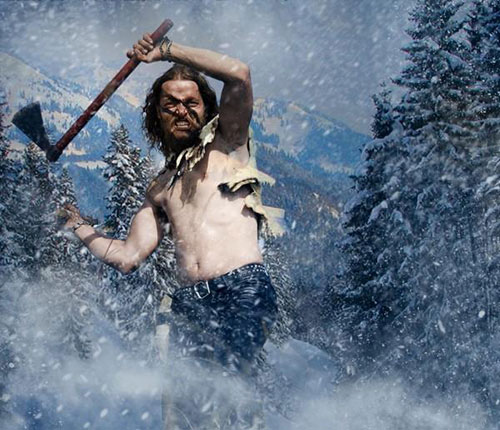 „It’s our opinion that musical changes must occur with a natural process during some time and there’s a lot of external factors that help that metamorphosis, those factors are so many, that we can summarize them to a more simple word like experience of life; a bit from each member even without knowing that, it makes a receipt from where we can synthesize what we bring each day to the band. It simple can’t happen like from one day to the other, that feeling must come from our inside and subconsciously in order to work. We can’t be a good painter today and next day decide to be a good cook as an example.”

What do you think, why so rare bands play really good and epic, heathen Metal nowadays? Is it a question of the broad range of inner views and feelings?

„It can be but mostly, of course the more you like a thing the better you do it that is a universal axiom. But that involves lot of work and being able to make some sacrifices. But there many great bands playing this music some already consecrated ... and some yet to be found ... let the old gods decide, but heathen Hetal is growing, spreading nicely even to outside Europe ... that is always a good omen.”

Which are your favorite Metal acts?

„As a band we try not to follow trends and we really don't try to be other bands but Gwydion, but as individuals we do look up to some bands like Finntroll, Ensiferum, Týr (with whom we had our 2008 tour) and a lot of other Folk/Viking bands in the scene, but we really try to be truthful to ourselves and although we respect them very much for their work we keep on doing our own thing and we think that's really different from what’s out there.” 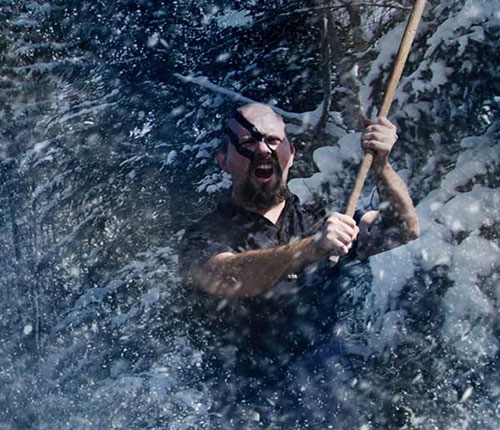 Do you take care about TV, Radio, Newspapers and all their targeted spread cruel ‚news‘?

„We don´t have appealing to see such news on TV, Radio or Newspapers. The Media are very powerful in taking the suffering around the world and it becomes the raw material for their creations to produce fear in our minds. They process and filter real events, creating a distorted reflection that condenses the drama and pain of life into a form of entertainment or at least a product that is entertaining. But we can´t live in a dream or fairytale, thinking only in warriors and castles and so on. We sometimes like to see what happens around the world and sometimes we make a music or a lyric based in these facts, in a metaphoric way.”

Any live gigs already scheduled for 2010?

„Yes, we are planning live gigs in 2010 to promote the second album, which will be out in March/April. Our desire is to play in the bigger festivals in our country and play abroad in some important Metal Festivals and in a Tour. We already have booked some live gigs in England in 2010. We have been in Germany last year in the Ragnarök Askeereia Tour where we played 18 gigs in 9 different countries in some important venues and festivals alongside with Týr, Alestorm, Hollenthon and Svartsot and we would like to repeat the experience next year.”

Which is your preferred kind of beer and booze?

„Well in short... Just about everything goes really. but we without a doubt our favorite is Sagres beer, a beautiful pilsner that we have in Portugal, and, we are fortunate enough to brew our own mead, maybe some day you'll see our Gwydion mead at the stores, haha.”