2001 once established as a duo, these Italian Black Death Metal might rages recently quite furious. Cracking hard, vehemently and manic martially it rages in Grimness up-to-date to the thing. And the four extremely uncompromising thunderbolts luckily enriching its abnormal variable compositions with an enormous portion of electrifying originality.

A first mini-album has been set off the chain in 2002. And now the strong playing quartet hurls a capital debut album after, entitled „Increase Humanity Disgust”.

And this surprisingly high-qualitative murderer-part blows so a few things out of this musical direction effortlessly over the pile. Singer and guitarist Valerio Di Lella drinks hard often times, like the rest of its troop, according to his own characteristic confessing. 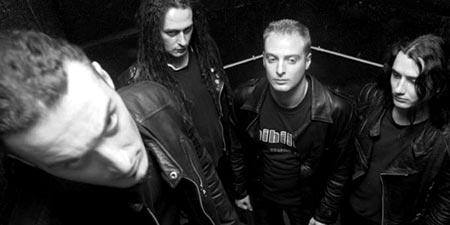 Hey Valerio, how are you doing these days?

„We’re often heavily drunk! We are producing new stuff for the new album, planning some concerts, the same old things as always.”

What means it to you personal, to play such music as with Grimness?

„To express ourselves the best we can. It’s our own language that everybody can understand. I also believe that Grimness it’s the only way to get satisfied to 100 % with our life. Probably without Grimness we would be just four alcoholics.”

„For sure Voivod, who represent for us the link from common metal to an extreme industrial and dissonant landscape that probably inspired lots of “modern” extreme metal bands such as Thorns, Satyricon, Cadaver inc., Red Harvest, Aborym etc… We got also some punk or rock influences from bands like Discharge or Queens Of The Stone Age. I know that some wouldn’t agree with this sentence, but I think there are dozens of other rock, punk or whatever else you like bands, that are more dark and aggressive than hundreds of self-called black-death metal bands. This is just to mention our background that might be giving this modern feel to our sound. Of course we still love the golden age of the death metal scene. I mean bands like Pestilence, Carcass, Death, Morbid Angel are into our D.N.A., just like Celtic Frost, Motörhead, Slayer and all the other bands that every metalhead would mention into his interviews.”

How would you describe your music to new listeners?

„Extreme Metal aggression as it should be in 2005.” 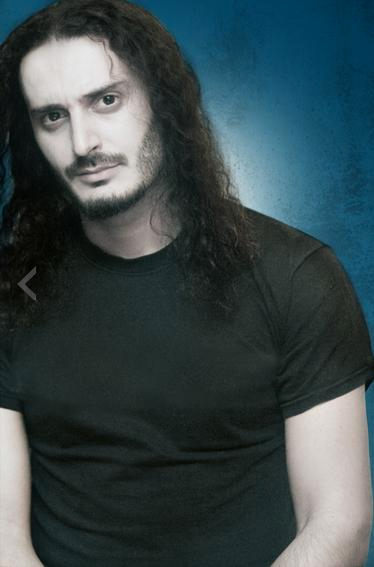 Btw: which other Metal acts do you like to hear?

„There aren’t any genres that I prefer. Right now I’ve heard very good experiments and sound manipulations from Aborym: I love their sickness! Another brilliant band is Audiopain from Norway. They remind me of the excellent Sadus. I think their last album ,The Traumatizer‘ is one of the coolest albums; everyone must have it in one’s CD collection.”

„On this August 2005 we got a summer festival with our friends Hour Of Penance here in Italy and the Springer Metal Fest in Slovenia is waiting to be confirmed. In September-October we start to tour across Italy. We’ll have a special surprise for December maybe. We don’t really care about special effects; we just play as fast as we can while headbanging and shedding a lot of sweat: as it should be!”

To my mind your new album is one of the most unique in nowadays Black Death Metal releases out of Italy! How far do you agree?

„Thanks. What can I say? I still like it. You know, a musician is usually never satisfied about the result of his work, but I am. I know the new material we are working on sounds better. I think we’ll unleash the new album before summer next year. The Italian metal scene seems always to be full of good and interesting bands, but in the end nothing happens. Maybe because people worldwide prefer Italian food to Italian music: that’s our curse!”

Already some new songs finished for the next album?

„Right now we got four songs complete plus a ghost track. We got a lot of stuff we are rehearsing and I think in March 2006, when we’ll start the recording sessions, we’ll have ten or eleven selected tracks. We are preparing also a video clip, some remixes of songs from ,Increase Humanity Disgust‘ and from our mini-album ,Dogma‘, maybe a cool cover for a bonus CD…”

Which one(s) out of the band did compose all these thrilling melodies?

„On ,Increase Humanity Disgust‘ I wrote all the songs – including melodies – but I share lots of them with our other guitarist Andrea, because I also sing and sometime it is not so easy to play melodies and scream at the same time. On the new album Andrea wrote a lot of stuff and drummer Jonah and bass player Willer added their own contributions, so there will be my songs, Andrea’s songs and songs we wrote all together. I think it will be cool to hear different ideas on the same album.”

What stands behind the title „Increase Humanity Disgust”?

„It’s a sort of advice. Fall into the abyss and then rise. Watch how low goes humanity and feel disgusted. Be proud to feel it and delete mercy from your thoughts because you don’t need it to live among the humans. Then spread the disgust. This is the first step to understand our music and lyrics. Our next album, it will be probably called ,Dare‘. The meaning of this it’s because that’s what we tried to do during the manipulation of our new stuff and also because it’s our second advice to our listener. At first we said ,Increase Humanity Disgust‘, have you done it? Now dare!” 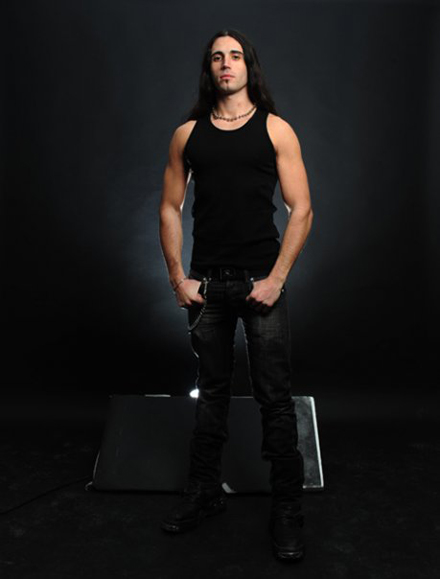 Which were the main lyrical influences for the album?

„Reflections about the things I see and live everyday.”

Please tell a bit about the lyrics of the songs!

„I don’t like to do this kind of thing because everyone finds his own key to understand the album. I found a concept in the songs after I made them: Introspection… is the vision of how the modern mind works. Then wake up and enter the dimension evil, know that humans can’t be purified and that they can slay their own god and follow the call from the cosmic chaos. Watch people worship nothing, taste the aroma of revenge and be disgusted with all the people who live in ignorance. Finally find your peace outside of your body. This is what I found into my music: a journey across the shores of existence and experiences that everyone interested into this kind of music probably know. Someone else will give a different meaning to the whole album for sure.”

Which are your own expectations regarding the album?

„We don’t have any expectations. We write songs we love to play and listen to. If people appreciate our work, then we are satisfied of course but we don’t expect to be superstars and tour across the world like Mötley Crüe or Guns N´ Roses. If it happens for us that’s ok, but I don’t live in the expectation of this moment.”

Where has been the new work produced?

„At the Outer Sound Studios here in Rome by Giuseppe Orlando, which is the drummer of the group Novembre. He did an excellent job. He knew Grimness in 2002 when he recorded ,Dogma‘, our MCD and he respects us for our music since then. We are proud of this because we care about his opinion. He understood our style so everything was easier because everybody agrees with the same choices, both for building up the sounds of the instruments as for the mix. We only focused on performing our music on the best of levels.”

Something relevant to report out of the spent time in the studio?

„Nothing in particular. We worked so fucking hard because we didn’t have much time or money to spend in the studio. Anyway we had a very good time. We are friends with our producer Giuseppe Orlando and so once we got off our daily job, we spent a lot of time having fun together. When we finished the mix we had a party and of course all of us were totally drunk!”

In which specific direction will go the sound of Grimness?

„As I said we love to dare in music… as we do in life. So each track will be a new experiment. The Black Metal moments will be faster, Death Metal will be older - I mean from the early nineties, the thrashy riffs will be more Teutonic and the rest will come from other genres, from Motörhead to Voivod, from Darkthrone to Discharge.”

Specific plans for the future?