A new hard-metal hammer-trio out of Norway makes speak presently everywhere of itself – and the offered musical mixture opens also quickly the reason for that.

Grimfist are whipping with an just as infernal as originally style-mixture out of Death, Black and a sharp pinch of traditional Old School Heavy Metal. Throat-torturer Frediablo, axeman Ole Walaunet as well as drum-devil Horgh can be proud of the new debut album „Ghouls Of Grandeur”.

A long time showed a publication of this genre no more such distinct artistic independence. Especially Horgh, who has beated the drums earlier in the recently dissolved, popular blacksters Immortal, seems to give in rhythmic manners all what he has on the box.

Also legendary producer Peter Tägtgren likes the harsh output of the boys. He sat pleased for the dynamic three from Bergen after a long break once again at the mixing desk. I talk to Frediablo and Ole. 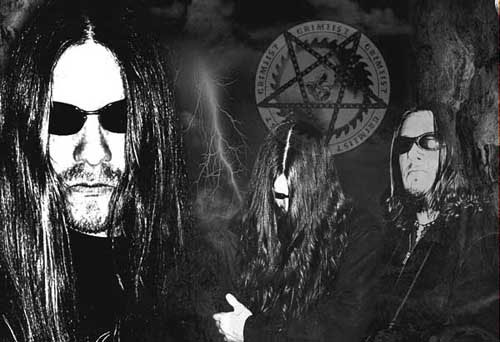 How came the bandmembers of Grimfist together?

Ole: „I wanted to create a heavier and extreme band, which blends all kinds of elements from our background. I knew Frediablo from Deride, and I talked to him about some of the ideas. He was interested, and I mentioned that I wanted to bring in Horgh, because he´s got a interesting style of playing which suits my guitar-style well. I contacted him, and he listened to some riffs. He liked the ideas and we started to commence on the song-structures. All of the song-arrangements are done here in Bergen by me and Horgh, while Frediablo is handling the lyrics, and vocal-arrangements. It works out perfectly well, because Frediablo lives in Skarrabakkje, which is approximately a 7 hour drive from us.”

„Ghouls Of Grandeur” - what has to mean the title of your new album?

Frediablo: „The title is a figure of speech, and has to do with us as members of Grimfist. A ghoul is one who delights in the revolting, morbid, or loathsome. A grave robber, or an evil spirit believed to plunder graves and feed on corpses, and in our case it has to do with the first. We're a band enjoying the more evil aspects life has to offer in form of music. Brutality, darkness and aggression, and in a way we are ghouls enjoying what we do best, which is creating kick ass music, just like a ghoul does what he does best. Besides, It sounds pretty fucking cool, and sometimes that doesn't hurt either.”

Exists a concept behind the songs - and if yes, what kind of?

Ole: „We exist because we know we can create something special together. As long as we get our kicks, we will continue to push Grimfist.”

Frediablo: „No concept other than keep doing our own thing, play brutal music and have a great time long the ride. We do this to please ourselves, and as long as we're pleased, we will like Ole said, continue to push Grimfist.”

What is the main content of the lyrics of Grimfist?

Frediablo: „The main content is personal experiences. I write from the heart, and I don't mean fucking 'I love you' kind of shit. I put to paper what I feel about shit like religion, greed, the pleasures of intoxication, sex and heavy fucking Metal. It's pretty much me being me, just a little louder.”

Which were (and still are) the inspirations for Grimfist´s music?

Ole: „I listen to more old school Heavy ... bands like Judas Priest, Iron Maiden, Black Sabbath, Scorpions, Accept, Slayer; there isn´t much of the newer extreme stuff out there, that has caught my attention.”

Frediablo: „Movies, alcohol, weed, religion etc... I draw no inspiration from other bands, cause I hardly ever listen to music, unless they are soundtracks to movies. That makes it even more frustrating when people come up to you and tell you that your vocal line, or singing style sounds like this or that, and you've never even heard of the bastards. I don't care if I sound like the guy next door, or like a fucking Rock Star, as long as I can face myself and the choises I make, I'm a happy boy, but bands I do listen to once in a while are Brujeria, Jorn Lande and Vagabond. Jorn & Vagabond are far from extreme, but when playing this kind of music all the time, I tend to not listen to extreme bands much. My head would just fucking split in half, and besides, contrast are what makes life interesting.” 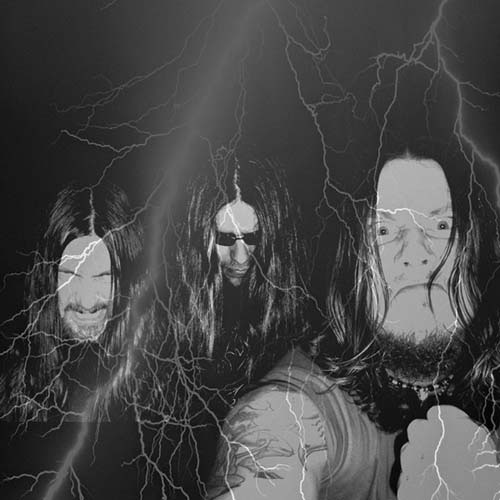 Produced by Peter Tägtgren: are you one of the chosen acts?

Ole: „Horgh knew Peter from the Immortal recordings. He talked to him about Grimfist, and sent him a demo. He liked it and gave us an offer, and we went over to Abyss in March and recorded/mixed the album within a couple of weeks.”

Frediablo: „Understand, there was no choosing here. We could have recorded the album anywhere, but since Peter gave us an offer too good to resist, we went for it, like any other right minded band would have done. Peter is a great fucking guy, and the fact that he has recorded a lot of big bands, and is a highly profiled musician, had nothing to do with us recording our debut album in the Abyss studio. He got a kick from our music, and that is the most important thing, because we didn't want no fucking studio-nerd just in it for the money, and who didn't headbang to the same parts as we do and shit like that. Peter is a very professional individual, but he knows how to have a good time as well, and that is very important to us. It is all a simple matter of people with the same outlook on life and music, coming together and being creative.”

Which bands do you listen nowadays - only Metal acts?

Ole: „Mostly old school Metal, but also bands like Jorn, Masterplan, some 70´s Acid/Prog bands, I don´t have any restrictions to what I listen to, as long as there´s something in there I find interesting.”

Frediablo: „As I previously stated, I don't listen to much music, but when I do, its movie soundtracks mostly. But when I get piss-drunk, I put on either some Jorn Lande or soemthing really primitive and aggressive like Darkthrone or Svartpest.”

The Metal style of Grimfist – how has it developed? Very refreshing in my opinion, sounds total new!

Ole: „Thanks! Our sound comes from 3 different guys, but with the same platform, that put their heads together, and blends different genres. All of us have a lot to give, and we have strong opinion on how kick ass Metal in 2003 should sound!”

Frediablo: „Like he says, we're 3 different guys, socially, musically, and personally. But this just makes it more interesting, cause we all have our own way of doing things within the same genre so to speak, and we always end up with a crushing result. We did not intentionally sit down to create something new, but since we don't care what belongs where or not, we just might end up with solutions other bands won't. We don't care about being 'true Metal' and shit like that. Who cares what is true or not, as long as it kicks ass, I couldn't care less, period!”

By the way: what does the band name Grimfist mean?

Ole: „It means whatever you want it to mean. People associate the word with different things you know..Some girls have fist-fucking in their minds when the word Grimfist is mentioned, which is cool... hehehe... To us the word Grimfist sounds very brutal, and reflects the music we´re doing. Frediablo got the inspiration from Horgh´s clenches!”

What is your opinion to all the ,evil-image‘ Black Metal bands nowadays, all those trendy hordes? What do you say to the mostly blind usage of ancient occult symbols and signs?

Ole: „I don´t have a strong opinion with regards to nowadays trends. I don´t care too much what others do, or believe in. I´m dedicated to Grimfist and I stay true to what we believe in.”

Frediablo: „Who gives a shit, man?! ... I myself play in 3 Black Metal bands, and we also use symbolism to promote our music, but that doesn't mean that we walk around with lighters in case a church would suddenly come in our path. The scene today is just as fake as the scene in any musical genre has ever been. It's all about being heard, and getting your music out there, and most people will do whatever it takes to get to that point, and many of the choises people make, are in my book just pathetic, but that's my opinion. I'd rather see black clothed so-called satanists walking around, than fucking MTV Rock Star looking faggots!!! And besides, who isn't acting anyway. Jesus fucking Christ, look at Kiss. They play disco music for fuck sake, but they were one of the first bands to ever use so-called corpse-paint, which is a horrible term. How many corpses look like a whale anyway!!?... Each to their own I guess, but all I know is that as long as the music is killer, I don't care if it was made on Mars by Aliens, or in the basement at someone's grandmother. Venom used the same pentagrams that bands use today, so that must make them just as fake then according to some people's standards, right? Regardless, it gives people something to talk about, and take a stand, and that is a miracle in itself.”

Which is the greatest mistake - among a lot of others - in the whole Christian religion, in your opinion?

Frediablo: „Trying to prove the bible to be true, by forcing others to believe also through violent acts, lies and ignorance. The whole Christian history is packed full of evil and injustice, so maybe the upcoming christian Black Metal bands are truly more evil than the ones into Satan? All I know is that the bible is handy the have around the house when you want to smoke a joint, but you're all out of cigarette paper.”

Please unveil the philosophies behind the band!

Frediablo: „Kick ass and keep it brutal. Not very deep and dark, but at least it's honest. We are here to do what we do best, and will continue to do so until maybe one day the 'drive' isn't present anymore.”

What is your definite goal with the music?

Frediablo: „I have one main goal with my music, and that is to please myself, period!!... and if I can make people think and raise their eyebrows, be critical and open their eyes, by doing so, then that is even better, but all in all, I just wanna make myself happy, and so far so good.”

Which was your biggest disappointment in Metal?

Frediablo: „Too much image, and not enough good music.”

Which is your greatest hope in Metal?

Do you have any last special words?

Ole: „We are the ghouls of grandeur and these ghouls are here to stay! Cheers!”