After the album's predecessor „Sword Songs“ could not enrich the 2016 summer for all fans of the band as desired, Grand Magus should be able to make up some ground with the new epic „Wolf God“. This year the three-man Swedish band returns with a true Heavy Doom Metal triumph!

Grand Magus, once again fully in their element of origin, celebrate massive warlike battle hymns as if from a picture book of the genre. The wolfish guys pay their respectful tribute to this fascinating species once again. I talk to vocalist, guitarist and main songwriter JB Christoffersson. 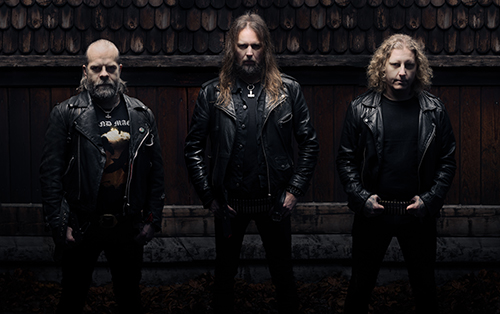 The wolf returns in visual manner to Grand Magus, after the 2010 released „Hammer Of The North“ output - what was the main idea about it?

„It was because of the title obviously. I wanted to have a Wolf God on the cover and suggested some ideas to our artist Anthony Roberts. It turned out fantastic I think.“

You guys once again pay a mystifying tribute to this fascinating animal - which attributes legends and ancient stories fascinate you the most?

„Hard to say really. I've been fascinated by the wolf since I was a kid. Not only the actual animal itself, but also the relationship between man and wolf and the cultural and historical aspects of that relationship. Of course the Norse myth/legend about Fenrir had a huge impact on me as a child, but also the legend about Månegarm.“

What should real men and wolves ever have in common?

„We are both animals I guess? I think human beings have more in common with animals than most people realize. I guess many people have lost their connection with nature these days.“

„Well, you see, my lyrics are really driven by emotional things, things that are somewhere in my subconscious. Because of this, I don't know exactly what they mean myself, and I don't want to ruin the listener's own experience while listening to our music. I want our songs to trigger people's imagination. Not to tell them things necessarily. Having said that, obviously a lot of my favourite themes are about the power of nature and also the idea of a conscious, aspect of animals and plants and organisms. These are definitely things that are explored on the album. And on previous albums too.“

„Wolf God“ - how do you feel now, after having finished these new, typically ‚Newer Magus’ish' collection of songs finally?

„It feels really good. I think this album has a lot of soul and emotions in it, a special feeling.“

The massive title song became an extraordinary rammer hymn with super tight rhythms - your music seems even more solid than before. At the same time, it sounds wonderfully nostalgic in the core. How do you manage such a bridge from old and new?

„We just follow our hearts and our instincts. We don't really think about things like that and we have never done it in the past. All our albums are like documents about the band and our emotions at that particular time.“ 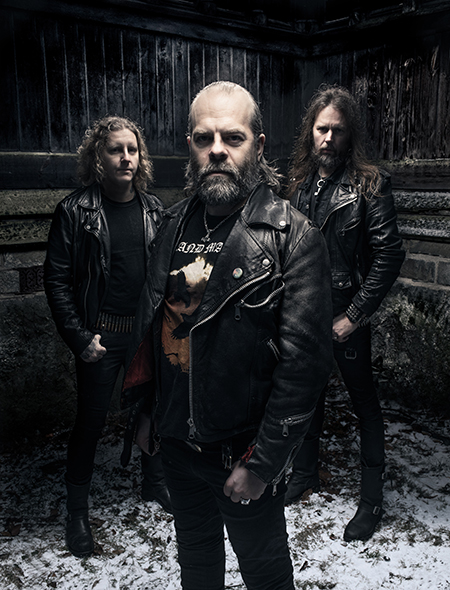 About the whole - please describe the main musical character of the new album release with your very own words!

„I think the album is heavy, groovy and with a lot of fire!“

„This was the first album for a long time that we recorded the basic tracks live and without a click-track. That means that the tempos might vary a bit within each song, because that's what happens when you play without machines. It also adds to the excitement and groove of the songs I think.“

The new music is drag-along of it's own, masculine cool and catchy ‚rocking‘, but also emotional, heroic and conquering ... what kind of emotions dominate these songs?

„The feeling of power is what attracted me to Heavy Metal when I was a kid and that's is overall the gift I want to pass on to our listeners with our music. But at the same time, there are of course other emotions involved, like loss, sadness, grief, joy, etc.“

„He Sent Them All To Hel“ ... also a superior track! While so many bands want to be as extreme as possible, you master your own Metal destiny with all naturalness. And how do you define your own naturalness?

„Thank you, that's really a great compliment. To me it's all about honesty and being true to yourself.“

The guitars sound so wonderfully belligerent, but they are still far from being cumbersome - does that just come out of your hands or do you work on such riffs and solos for a long time?

„Again, thanks a lot! I guess it's really something that comes from within, but it takes practice to get it out of course.“

Vocals are stunning ... wonderful earthy and determined ... but at the same time, there is much fervor, victory and triumph in your voice of and the one of bass player Fox - what is to tell about?

„Thanks! I think the voice is the most personal ‚instrument‘ of them all. What comes out is what is inside. You can't fool people with your voice.“

The songwriting process itself, what is to tell about in general - any changes to the past?

„Yeah, actually for this album is was a much more collaborative effort compared to the last three albums where I wrote most of the stuff on my own. This time we met up and jammed together, which was a lot more fun!“

Please tell a bit about the gratifying stable line-up situation and the current chemistry in Grand Magus!

„Yeah, it feels really good. We know each other really well and also know exactly where we are musically after so many gigs together. We all really enjoy playing together and to keep the flame of Grand Magus burning.“