Few representatives of the genre keep the flag with the original values ​​and ideals of these stylistics so high in the stormwind of modern fast-pacedness. The trio, once again, declares itself to be of the eternal mysteries and realities of ancient paganism, puzzling enigmatic death myths and staging one's own cult as if one had been born for it.

The new, as always with Grand Magus, upright anti-Christian minded „Sword Songs“ are therefore completely as efficient war music for so many opportunities in everyday life.

I speak with vocalist, guitarist, and main songwriter JB.

How does it feel, to have finished these new collection of songs?

„I feel great now, it took me about two months to recover mentally from the recordings, haha. It was hard work.“

What is behind the album title „Swords Songs“?

„It means songs about struggle.“

Please describe the main musical character of the new album with your own words!

Which noteworthy differences to the previous album „Triumph And Power“ are waiting for the listeners on „Sword Songs“ now?

„I think that „Sword Songs“ is generally a bit faster and more intense, that was our goal this time. There's also some really heavy parts. Also I think that the songs stand out more from each other, it's really 9 very different types of songs.“

What still counts most for you in making music with Grand Magus?

„To make memorable songs that will last for a long time!“

For what musical ideal does stand these new album release?

„My musical ideal is powerful Heavy Metal and I think that is what we have created.“ 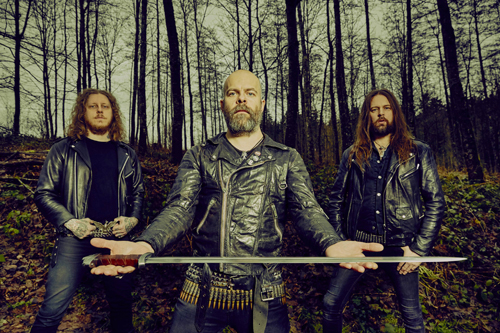 For my personal taste, the predecessor „Triumph And Power“ contains more catchy material in the direct comparison. Or?

„I think all listeners have their own unique take on music. For me, it's the other way around really. I think this album is more direct than „Triumph And Power“.“

How much importance do the melodies still have for the band?

„Very important. Without a strong melody it wouldn't be Grand Magus.“

How long has the songwriting for the new tracks lasted?

„About four months I think.“

Please tell a bit about the songwriting process itself; highs / lows to mention?

„Usually when I start to write it's very difficult in the beginning. It takes me about a month to find the direction and feel for what the new songs should be. That was the case this time around too.“

„I did. Ludwig wrote the chorus for ,Everyday There's A Battle To Fight‘ and Fox wrote the instrumental track ,Hugr’.“

Song titles as „Forged In Iron - Crowned In Steel“ or „Frost And Fire“ speaking a lot about the lyrics - be so kind and bring the main lyrical direction of the album a bit closer!

„The main lyrical direction is about struggles, both mythical, historic and personal!“