Liquefying even the most brutal rhythmic attacks at breakneck speed, showing off their virtuosity in terms of playing culture and conquering the ears in an ultra-melodic way - these Finns are a credit to the Power Metal guild of their country.

Founded in 2003, Gladenfold delight the genre gourmets with their second album „When Gods Descend“. The current successor to the 2014 debut „From Dusk To Eternity“ has such an independent style that some will wonder how one can come up with such a style in 2019.

The answer comes as calmly and bluntly from guitarist Toke Fønskov Gerdts, in the band since 2017, who works out the symphonic passages together with keyboardist Paavali Pouttu. 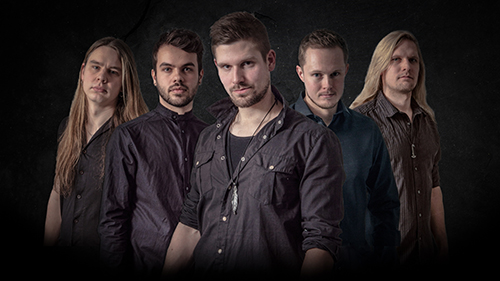 I hear refreshing, dynamic and hearty Metal sound with surprising original, well thought structures, reminds me partly decent on the band Serenity … have you guys already gained deeper experience in other bands?

„Thank you for the kind words! Gladenfold has been around since 2003, and while I know that we all have been in other projects, I think Gladenfold’s own history and evolution best explains how this album came out like it did. The band has been testing out the balances between the different musical influences, and what we as individual musicians can bring to the band, for a long time – For some of us, more than a decade. I feel that this, more than anything, has shaped the band’s sound. The band’s roots lie mostly in the combination between Finnish Metal (in the style of Ensiferum, Norther and Children Of Bodom) and German Power Metal (like Blind Guardian, Gamma Ray and Freedom Call), but have had different influences over the years - for example, if you listen to the earlier EPs and demos, like ‚Frozen Halls‘ and ‚In Somno‘, you’ll hear a more Folk Metal inspired sound.“

Is there anything deeper behind the band’s name, when you think more about?

„No, there’s no hidden meaning there, waiting to be dug out, I’m afraid. It’s a combination of the two words glade and enfold.“

Please describe the main musical character of the new release „When Gods Descend“ with your very own words!

What is the most important for you on the new release of Gladenfold?

„I think the most important thing about ‚When Gods Descend‘, for us, is how it shows off the diversity in our sound and that we, despite the long wait, are far from out of the game! We feel that we have struck a balance between the different elements that make up our sound (such as the relation between keyboards / symphonic parts and the amount of guitar tracks) with this record, and we’re also excited about exploring how this will affect future releases.“

„That is a tough question. On a broader level, I would say that we encompass both some of the complete euphoria of certain German Power Metal bands, as well as that hard-to-define Finnish melancholia. On a more song-to-song basis, the ‚emotion‘ ranges from the darker, more aggressive in songs like ‚Unreligion‘, through the heroic and blissful in songs like ‚Brothers‘, to the somber, perhaps longing nature of songs like ‚Ghosts Of Our Past‘ and ‚Last Goodbyes‘.“

„There’s no doubt about Esko (vocalist and former guitarist) being the MvP, when it comes to songwriting. That’s not to say that he was alone, as especially Matias (guitarist) gave invaluable feedback on Esko’s writing along the way, which definitely helped shape the album - Matias and Paavali also each wrote a song for the album. The work on ‚When Gods Descend‘ began after the release of the debut album, ‚From Dusk to Eternity‘, around 2014 and ended at the end of 2018. Relatively speaking, the songwriting process didn’t take up much time. The recording of all the parts, and especially agreeing on arrangements/mixing took up the bulk of the time.“

„The problem has not been a lack of ideas, but rather fitting all of ideas in there, without losing the song. Especially vocal arrangements, as well as the balance between keyboards/symphonic parts and the rest of bands, were tricky to get right. I remember that the arranging of ‚The Forsaken’ and ‚The Descent Of Gods‘ especially brought us some headaches.“

You guys spread diverse stories of fantasy, legends and tales … are there any special, theatric visions which raise in your imagination while playing the new song material?

„No, nothing specific, I’d say. You can probably compare it to the general experience of reading a fantasy novel or playing a tabletop roleplaying game – it feels like it’s striving for the same sort of thing.“ 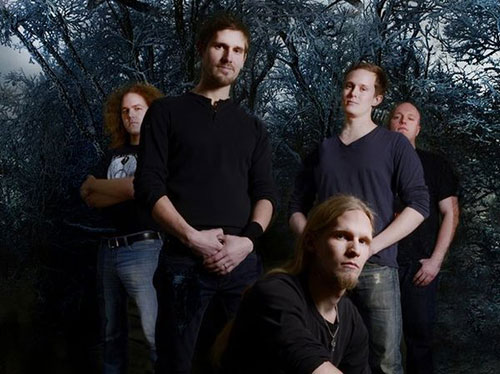 Allowed to ask you about any special musical influences which led to the new songs?

„Every songwriter in the band have been writing songs long enough for it to come about pretty intuitively. Our main songwriter, Esko, has previously described it like ‚songs constantly whirling around inside my head‘. Of course, we are all influenced by what we listen to, but we don’t have ‚the Kamelot song‘, ‚the Blind Guardian song‘ and so on.“

„When Gods Descend“ - what is behind these title?

„The music was written way before the song titles and lyrics were decided on, and when time came to do that, we decided on a fantasy theme of gods descending to wreak havoc on earth. The album is by no means meant to be a full-on concept album, but it does have this atmosphere recurring throughout the album.“

„As previously noted, the lyrical content is mainly centered around fantasy – it’s not exactly original, but it certainly fits with the music style. It’s not based on any specific stories or characters, but we did sneak a few video game and folklore references in there!“

„The last 2 years have been very interesting, being in this band. Since we’re currently missing a bass player, I actually originally applied for the band to play bass. I then found that our lead singer, Esko, had wanted to focus entirely on vocals, and so ended up on the guitar instead – it was probably for the best. I’ve of course had to find my place in the band, but I also feel that each member seems to (even more so) have found their role. To give an example, I mostly focus on serving tight rhythm guitars, grand orchestral sound and other production details, while Matias is a much more skillful lead guitar player, much better at polishing the song structures and definitely more the music ‚business man‘ between the two of us. In that way, we play to our strengths within the band all around – I don’t think there’s any other sensible way to do it.“