The Forefather project was begun in September 1997 by founding members and brothers Athelstan and Wulfstan after many years of writing songs and producing demos on a less serious level.

They wanted to incorporate powerful and catchy Metal music with their deep love of ancient English culture and history. Recorded in Summer and Autumn of 2001, the third full-length release „Engla Tocyme”, meaning „The Coming of the English“, continues in the same vein but yet again carves Forefather deeper into their own Anglo-Saxon Metal niche.

Forefather acting in their own, unique aristocracy class. Therefore to my mind there´s no single doubt about: with „Engla Tocyme” those highly talented English brothers deliver historical based, authentic Heathen Metal at it´s very best with, much magnificent and timeless melodies. 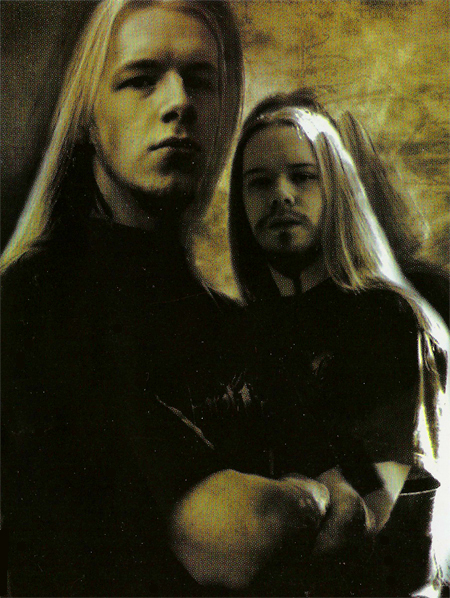 A dialogue with Wulfstan brings light into the background of Forefather.

„We’ve been together since Athelstan was born – because we’re brothers. I’m the elder sibling by just under three years“, he starts our dialogue. „Myself and Athelstan will only ever be the people that contribute music and lyrics to Forefather, it’s no one else’s business. Maybe we’ll get a session drummer one day but it’s more likely that we’ll buy a kit and play it ourselves. We used to rehearse with a drummer a few years back but he didn’t have enough enthusiasm.”

And they started quiet early to playing music:

„The main reason was because we both wanted to do something serious together. We’d been into Metal, playing guitar and writing songs for many, many years before Forefather. I got my first guitar when I was twelve, I think. But we hadn’t done anything serious, it was more a hobby then. The spark that lit the Forefather fire happened in September 1997.” And that fire shall burn for a very long time.“

The brother of Athelstan is a passionated historian, as he reports. 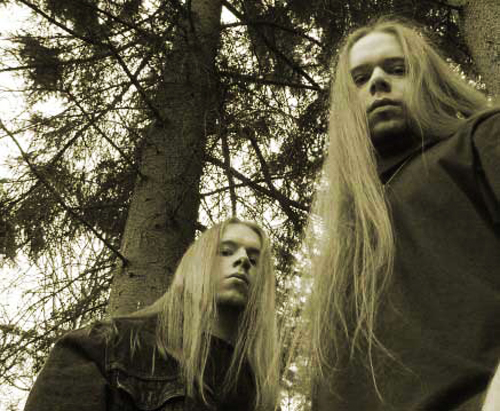 „I’m very interested in Old English history. It’s a shame that 99% of other English people aren’t. Most of our lyrics these days are inspired by Old English literature such as poems or folk-tales, as in `Engla Tocyme`, `Fifeldor` etc., and historical events, as in `The Last Battle`, `When Our England Died` etc. But we also draw inspiration simply from our pride in being English and our will to champion the cause of England’s downtrodden roots, as in `A New Dawn`, `Into The Forever` etc.”

„I was born in and have lived all my life in the shire of Surrey. Surrey is located in the Southeast of England, to the Southwest of London. The origins of the name are not clear but in old English it was written Suðrige. The ‘ð’ is pronounced ‘th’ and the ‘g’ is pronounced like a modern English ‘y’. The ‘suð’ part means south but it’s not certain what ‘rige’ means. England has its beginnings in the fifth century when Anglish and Saxon tribes invaded Celtic Britain from Southern Denmark and Northern Germany. After displacing the native Celtic populations they eventually conquered and settled what is now referred to as the Heptarchy. These were the seven kingdoms of the Anglo-Saxons. Eventually the kingdom of the West Seaxe (West Saxons) become dominant and England was unified in the tenth century. I think the main reason that England didn’t become known as Saxony was because there were still other Saxons living in Germany and this would have caused confusion for writers of the time. On the other hand the entire Angle tribe had left Denmark/Germany and come to Britain so it was simpler to use Angleland (England). That’s just my theory.” 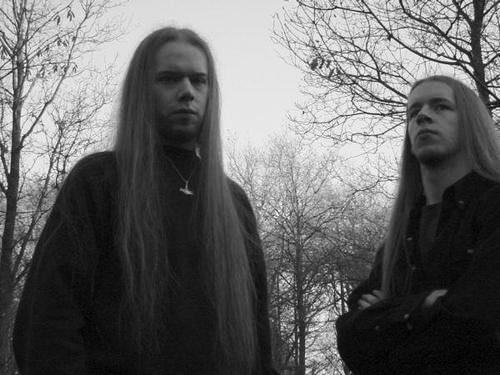 To ancient castles or historical places Wulfstan travels not often, as he‘s telling.

„Most castles or forts in England weren’t built by the English. They are mainly pre-English Roman buildings or constructions built by foreign rulers after the usurpation of the true English royal line in 1066. Most buildings during the Anglo-Saxon period of rule (449-1066) were wooden and have long since gone. So no, I don’t visit such places a lot. I’ve been to the site of the Battle of Hastings which was were the battle that ended Anglo-Saxon rule in England happened but that wasn’t to see any buildings, there is a huge abbey there built by the conquering Normans after their lucky victory, it was to pay homage to the spirit of Old England.”

Wulfstan mainly began to play once, `cause he loves Metal from the beginning on.

„The first Metal band I was into was Iron Maiden. I rented their `Powerslave` album on tape and copied it. For me `Powerslave` is the best Maiden album, I don’t care what anyone else says. I listened to that solidly for ages. Iron Maiden, Metallica and Megadeth probably had the biggest impact on me in my early Metal years. They all inspired me to start playing guitar and writing songs but the stuff I’m doing now is not directly influenced by them or anyone else.” 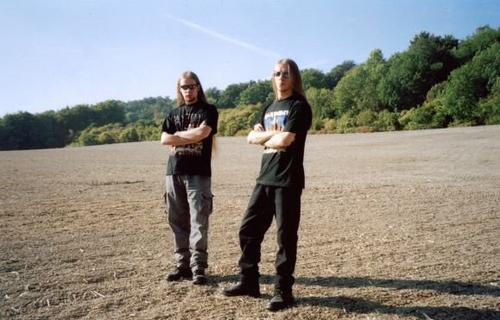 Which ones are the greatest Metal or non Metal bands nowadays to Wulfstan‘s mind?

„Difficult question. I’m listening to the new Gamma Ray album `No World Order` at the moment and really enjoying that. The new albums from King Diamond and Falconer have been superb too. These are just a few examples of what I’m listening to these days.”

„At the moment I don’t listen to a significant amount of modern or traditional Folk music of any background. I don’t know Loreena McKennit but if you say she has a divine voice I will trust you on that!”

How is to understand the bands name – a tribute to the legendary forefathers of England?

„We chose Forefather because it is a simple one-word name and it portrays our personal connection to our Old English ancestors and what they represented.”

Pagan, Heathen, metaphoric Satanic or any other ancient beliefs – what he finds most interesting? 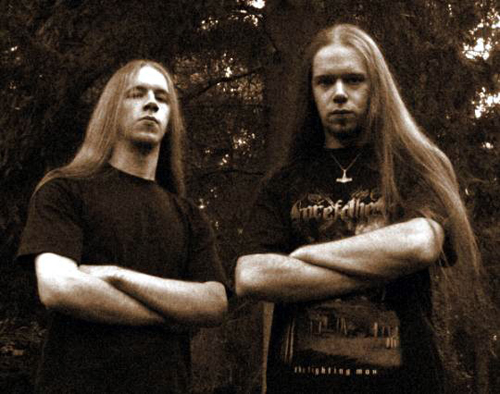 „Well I definitely find Satanic beliefs the least interesting and I’m not sure there’s a difference between Pagan and Heathen beliefs.”

Anyway, Wulfstan´s further statements of mentioned confessions of faith are worth to get red.

„I’m not an expert on any of them but I have no problem with people wanting take part in traditional Pagan/Heathen ritual. The problem in England is that it’s mainly middle-aged women pretending to be witches. I do find a lot of it silly, such as dangling things on the end of a piece of string to find out what sex a baby will be and so on. I think there is worth in some rituals, not from a supernatural point of view but an uplifting `spiritual` point of view but I don’t practise any such things myself. I have no more respect for Satanism than I do for Christianity. One’s all about me me me and the others is all about others others others. Again though, I’m no expert on such matters.”

Unfortunately Athelstan and Wulfstan have no plans at all to perform their material on stage.

„No, never. Also there are no existing plans to play live in the future.”

At the end Wulfstan compares the ages with further canny views.

„I hate a lot of things about the present but there are things about the past that weren’t that great either. I think what we need to do is replace the bad qualities of the present with some good aspects of the past. The distant past will always seem more interesting because it has more romance and mystery to it but I wouldn’t want to go back to the Dark Ages. If I had a time machine and I could go and see what it was really like for a few days then I would obviously go but what we need to concentrate is putting right the present. Everyone has their own opinions of how that should be done.”